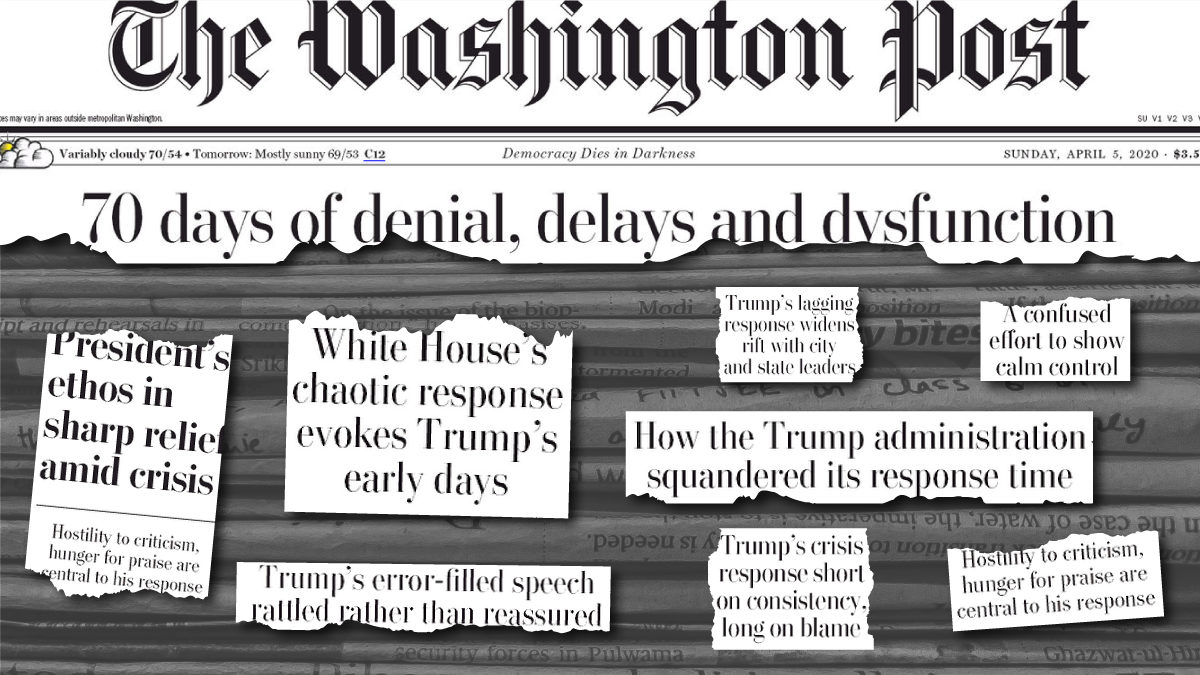 As the leading newspaper in the nation’s capital, the editors of The Washington Post know much of their influence comes from their ability to set an agenda for the many powerful political and media people who read it on a daily basis. And the first thing those powerful readers see every morning are the big headlines on The Post’s front page, framing the news the way The Post’s editors want them to see it. (Click on image to expand.)

In the 100 days since the coronavirus epidemic began to receive significant news coverage, The Post has used its front page to undermine the administration’s response to the unprecedented crisis, with dozens of headlines flagrantly editorializing against the President and nearly everyone on his team.

The Media Research Center reviewed the headlines of all 136 Washington Post front-page news stories about the U.S. government’s response to the coronavirus from January 17 through April 25. None of these articles was labeled as an editorial or an opinion piece, but many of the headlines employed heavy-handed rhetoric to slam the administration, from the President and the White House down to departments and agencies such as the Department of Health and Human Services (HHS) and the Centers for Disease Control (CDC).

Our analysts tallied 53 obviously negative headlines during this 100 day period, compared with just two that were clearly positive, a greater than 25-to-1 disparity. (The remaining 81 headlines were neutral, although that does not mean that the articles did not convey an obvious slant.)

Most of The Post’s venom was directed at President Trump himself, with highly-opinionated language such as: “A confused effort to show calm control” (March 1); “Trump’s error-filled speech rattled rather than reassured” (March 13); “White House’s chaotic response evokes Trump’s early days” (March 15); “70 days of denial, delays and dysfunction” (April 5); and “Hostility to criticism, hunger for praise are central to his response” (April 9).

Neither of the two positive headlines were about Trump: “Reliable Fauci has everyone’s ear — even Trump’s” (March 21) and “Mnuchin emerges as able dealmaker in stimulus talks” (March 28).

The Trump team’s many accomplishments — assistance deployed to hard-hit areas, millions of tests administered, deals struck to build ventilators, and the dramatic lowering of fatality estimates as Americans implemented the administration’s strategy to “flatten the curve” — were either ignored, buried inside the newspaper, or relayed with neutral headlines that refused to celebrate good news.

Strung together, The Post’s headlines read like a dismal daily diary of dysfunction, all aimed at conveying that agenda to its elite readership who would multiply their negative take throughout the political establishment.

Here are each of The Post’s hostile headlines about the Trump administration’s response to the coronavirus as they appeared in the local print editions of The Post over the last 100 days (click “Expand” to read them all):

■ Feb 4: “A scramble to execute U.S. order on travel.” From inside the article: “…the order came Friday with no advance notice and little planning.”

■ March 8: “How the Trump administration squandered its response time.”

■ March 15: “Trump tears up CDC’s playbook on health crisis.” From inside the article: “But the Trump administration’s zigzagging, defensive, inconsistent messages about the novel coronavirus continued Friday, breaking almost every rule in the book and eroding the most powerful weapon officials possess: public trust.”

■ March 24: “Trump may ditch safety guidelines to jolt economy.” From inside the article: “…defying public health experts who have warned that doing so risks accelerating the spread of the novel coronavirus or even allowing it to rebound.”

■ March 30: “‘They didn’t move fast enough’; Frustrated by the federal government’s response to the outbreak, local officials acted on their own.”

■ April 5: “70 days of denial, delays and dysfunction; From the White House to the CDC, political and institutional failures cascaded as the virus spread. Despite being better prepared than many countries, the U.S. saw opportunities to mitigate the crisis slip away.”

■ April 7: “Trump relies on impulse in push for unproven drug.”

■ April 9: “President’s ethos in sharp relief amid crisis; Hostility to criticism, hunger for praise are central to his response.”

■ April 10: “White House seeks easing of shutdown in May, but some fear 2nd viral wave.”

■ April 11: “Plans to contain virus emerge in bottom-up effort.” From inside the article: “A national plan to fight the coronavirus pandemic in the United States and return America to jobs and classrooms is emerging — but not from the White House.”

■ April 23: “Scientists at Trump’s side have to toe a difficult line.”