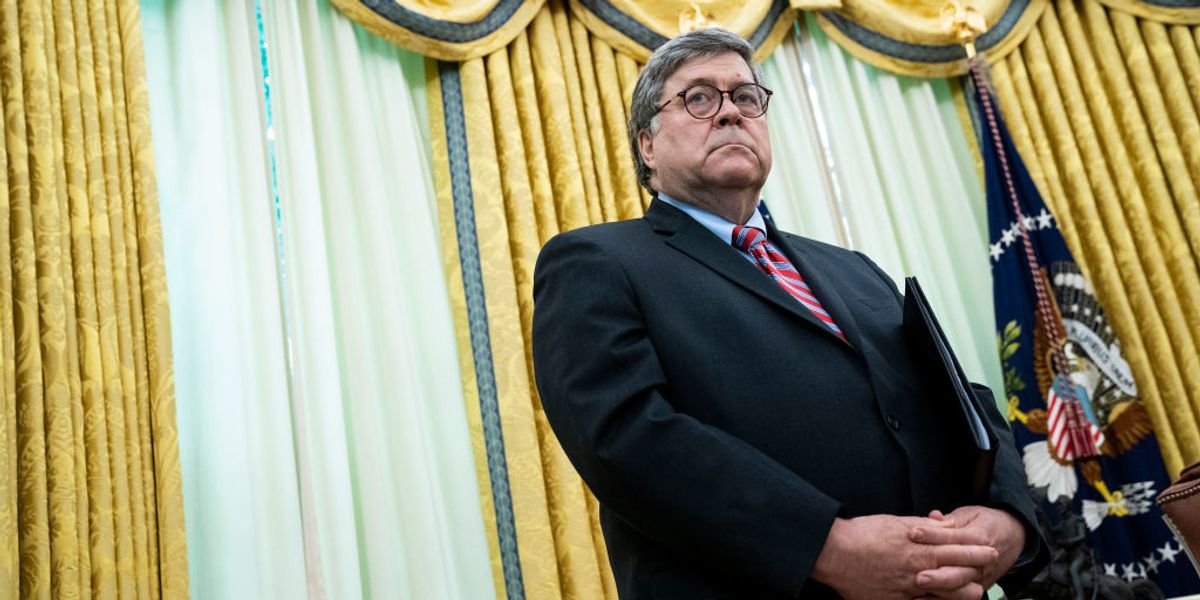 Attorney General Bill Barr placed some blame on Friday’s riots that plagued cities across the nation on “far-left extremist groups.”

On Saturday, Barr released a statement about the riots across several prominent U.S. cities, including Atlanta, Dallas, Portland, Seattle, and New York City. The attorney general said that the riots were being “hijacked by violent radical elements.”

“Groups of outside radicals and agitators are exploiting the situation to pursue their own separate and violent agenda,” Barr said.

“In many places, it appears the violence is planned, organized, and driven by anarchistic and far-left extremists, using Antifa-like tactics, many of whom travel from out of state to promote the violence,” Barr’s statement read.

“We must have law and order on our streets and in our communities, and it is the responsibility of the local and state leadership, in the first instance, to halt this violence,” he continued. “The Department of Justice (including the FBI, Marshals, ATF, and DEA), and all of our 93 U.S. Attorneys across the country, will support these local efforts and take all action necessary to enforce federal law.”

Barr also pointed out that “it is a federal crime to cross state lines or to use interstate facilities to incite or participate in violent rioting.” He added, “We will enforce these laws.”

President Donald Trump was also concerned about rioters coming from other states to loot and destroy cities.

“80% of the RIOTERS in Minneapolis last night were from OUT OF STATE,” Trump tweeted on Saturday. “They are harming businesses (especially African American small businesses), homes, and the community of good, hardworking Minneapolis residents who want peace, equality, and to provide for their families.”

The mayor of Minneapolis, the mayor of St. Paul mayor, and the governor of Minnesota all said that the people involved in recent riots in Minneapolis were from out of state.

Minnesota Gov. Tim Walz (D) confirmed Trump’s figures, and said that only 20% of the protesters who have been arrested are state residents.

Minneapolis Mayor Jacob Frey (D) said the majority of the rioters arrested during this week’s riots were from out of state.

“I want to be very, very clear. The people that are doing this are not Minneapolis residents,” Frey said. “They are coming in largely from outside of the city, from outside of the region, to prey on everything that we have built over the last several decades.”

On Friday, St. Paul Mayor Melvin Carter (D) went so far as to say that all of the dissenters involved with the riots stemming from George Floyd’s death were not local residents.

“Every single person we arrested last night, I’m told, was from out of state. What we are seeing right now is a group of people who are not from here,” Carter said.

KSTP-TV is reporting a different story. According to jail records, there were 18 arrests in St. Paul between Thursday and Saturday morning, four of which were people from out of state.

In Minneapolis, there were reportedly 27 riot arrests between Friday and Saturday, with only three out-of-state arrests.

William Barr commented on the George Floyd case by saying the outrage over his death is “real and legitimate.”

“Accountability for his death must be addressed, and is being addressed, through the regular process of our criminal justice system, both at the state and at the federal level,” Barr stated. “That system is working and moving at exceptional speed. Already initial charges have been filed. That process continues to move forward. Justice will be served.”

Former Minneapolis police officer Derek Chauvin, who knelt on Floyd’s neck for nearly nine minutes, was taken into custody on Friday and charged with third-degree murder and manslaughter.

Whatever Happened to ‘Scranton Joe’?
Lunacy: AOC calls for reduced bail for criminal defendants as man alleged to have mowed down parade participants in Waukesha was out on reduced bail
Wikipedia Contemplates Deleting Article On Communist Mass Killings
‘Guard for news crew dies after being shot in attempted robbery’
Media panic that new COVID variant could pose ‘significant threat’ to Joe Biden’s agenda