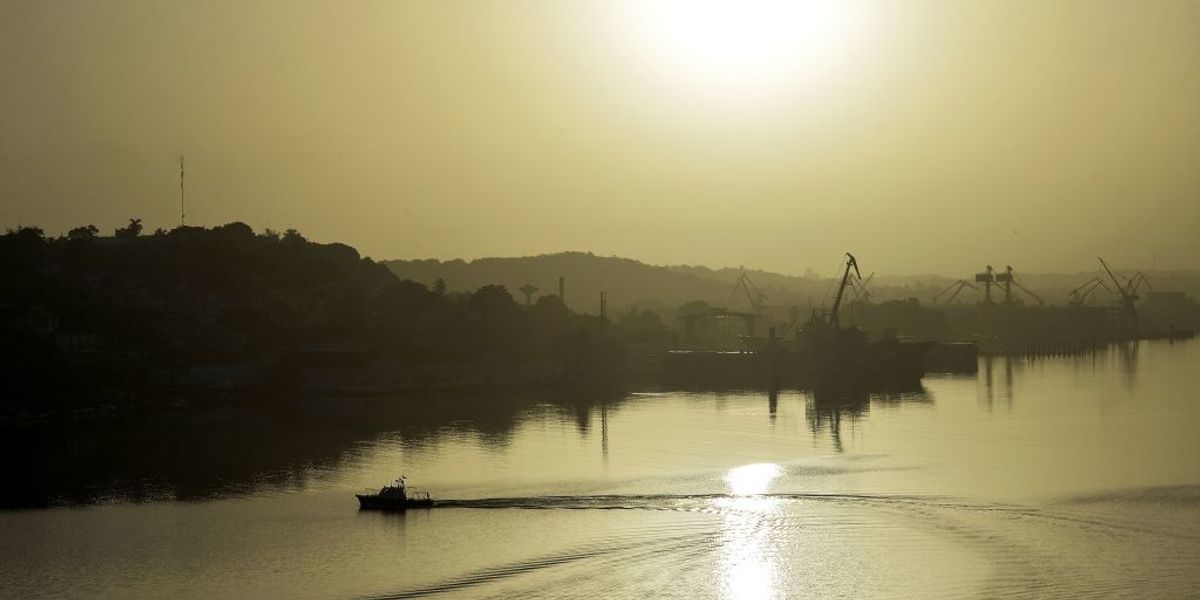 After making a 5,000-mile journey across the Atlantic Ocean, dust from the Sahara Desert has arrived in the United States. Experts say this is the largest dust cloud in the last 50 years, prompting the nickname of “Godzilla” because of it’s colossal size.

To give you an idea of how enormous the Godzilla dust cloud is, here are images from the International Space Station.

The station orbited above the shadow of the solar eclipse in Asia then the Saharan dust cloud over the Atlantic on… https://t.co/S03Lqh0OcY

“In terms of concentration and density and size, it is the most dust we’ve seen in 50 or 60 years,” said Pablo Méndez Lázaro, who is an environmental health specialist with the University of Puerto Rico.

The annual natural occurrence is officially called the “Saharan Air Layer.” It is comprised of sand, dust, and particulate matter that gets swept up into the atmosphere from the massive Sahara Desert in North Africa. The dust gets trapped in the air, usually in a two-mile thick layer of the atmosphere. The SAL typically begins about a mile above the surface and winds transport it westward, according to the National Oceanic and Atmospheric Administration.

“Saharan Air Layer activity usually ramps up in mid-June, peaks from late June to mid-August, and begins to rapidly subside after mid-August,” the NOAA said.

“The main impacts of the Saharan dust are a whitening of the sky during daylight hours, redder sunsets, and decreased air quality,” the National Weather Service said.

Saharan dust has caused hazy skies in the Southeast, lowering air quality and irritating allergies — but it also ma… https://t.co/al6KZ0gblz

The dust plume turns skies hazy, and visibility can be significantly diminished. It will sometimes leave a thin coating on the ground.

The dust cloud can drastically reduce air quality. In the Caribbean this week, air quality plummeted to “hazardous” levels. People were warned to stay indoors, wear face masks, and use air filters.

“The tiny dust particles contained in the plume will cause eye, nose and throat irritation for anyone who comes in their path, but particularly for allergy and asthma sufferers,” Dr. J. Allen Meadows, president of the American College of Allergy, Asthma, and Immunology, said in a statement on Tuesday.

The Sahara dust storm arrived in parts of the Caribbean and Mexico earlier this week, and is currently traveling through the United States.

On Friday, there were hazy skies in Panama City Beach, Houston, and Corpus Christi.

#SaharanDust arriving in Panama City Beach Thursday evening. Looks like a scene from another planet! 🪐

SAHARAN DUST! ☀️🐪
A pilot and @WINKNews viewer sent me this earlier today above Florida at 15,000 ft. Wow!… https://t.co/6sSYNUoD5Y

Brown Haze can be seen in the Sky over Corpus Christi this morning indicating the Saharan Dust has arrived. #stxwx https://t.co/aigikxVeQJ

The dust cloud arrived in Tulsa on Saturday.

Green Country skies are browning up due to dust all the way from the SAHARAN DESERT! We’ll have… https://t.co/R0S453B4ij

The Godzilla dust cloud is expected to continue moving north over the weekend, and reach Chicago by Sunday.

The latest Saharan Dust Layer forecast keeps most of the dust in the SE 1/4 of the nation… but some of the thinne… https://t.co/q3rGxK3leq

‘GODZILLA DUST CLOUD’: A massive dust plume from Africa’s Sahara desert is moving over the U.S. — stretching from T… https://t.co/vLAGMEoB2F

Models are forecasting another dust cloud entering the Gulf of Mexico next week.

The one positive about Saharan dust clouds is that they suppress hurricanes, which is welcomed since the NOAA is predicting an above-average Atlantic hurricane season with the potential of “extreme activity” in the forecast. The dry desert air in the dust cloud inhibits the formation of tropical cyclone that needs warm, moist air.