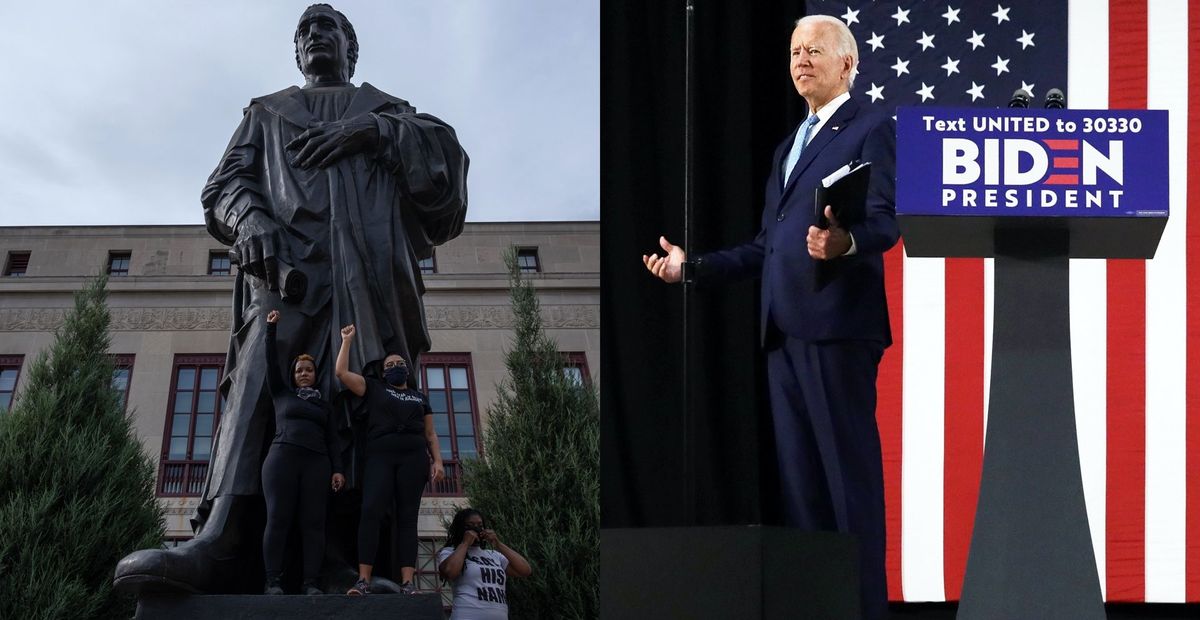 Far-left woke radicals have been taking advantage of current racial justice protests to attempt to tear down several memorials of historical figures important to the United States’ founding and heritage.

Set aside the controversial statues of Confederate leaders and military men, these leftist are determined to see monuments to the likes of George Washington, Thomas Jefferson, Teddy Roosevelt, Christopher Columbus, Abraham Lincoln, and others removed from the public square. And if their demands are not met forthwith, they’ve made it clear that they’ll start the defacing and destruction on their own.

So what is a liberal member of the Democratic Party base to do when their party’s presumptive nominee not only says the statues of genuine American heroes should be left alone but issues a call for the government to expend resources protecting those statues?

Surely the unhinged protesters in the street were not thrilled to hear former Vice President Joe Biden, the Democrats’ only hope to end President Donald Trump’s reign, make just such a declaration Tuesday.

What did Biden say?

During Biden’s first news conference in months, one reporter asked the former veep for his views on the current controversy over memorials.

Biden made his stance pretty clear: Put the rebel statues in museums and protect those that honor the likes of Jefferson, Washington, and even Columbus.

He began by noting that memorials for Confederates who fought against the United States in support of secession and slavery “belong in museums; they don’t belong in public places.”

Then he went there.

“With regard to those statues and monuments, like the Jefferson Memorial or whatever, I think there’s an obligation that the government protect those monuments,” he said, noting that they were “different” because they were “a remembrance” and not a “revering” of people known for their controversial views on race and slavery.

He noted that the Founders and other historically important figures had “much broader views,” while acknowledging that they might have also had troubling views on race “in their past” that were “distasteful.”

“Taking down, toppling a Christopher Columbus statue or George Washington’s statue or et cetera,” Biden continued, “I think that is something that the government has an opportunity and a responsibility to protect from happening.”

Joe Biden says that the government has an “obligation” to protect monuments to people like Thomas Jefferson and Chr… https://t.co/qmT9dYzlLR