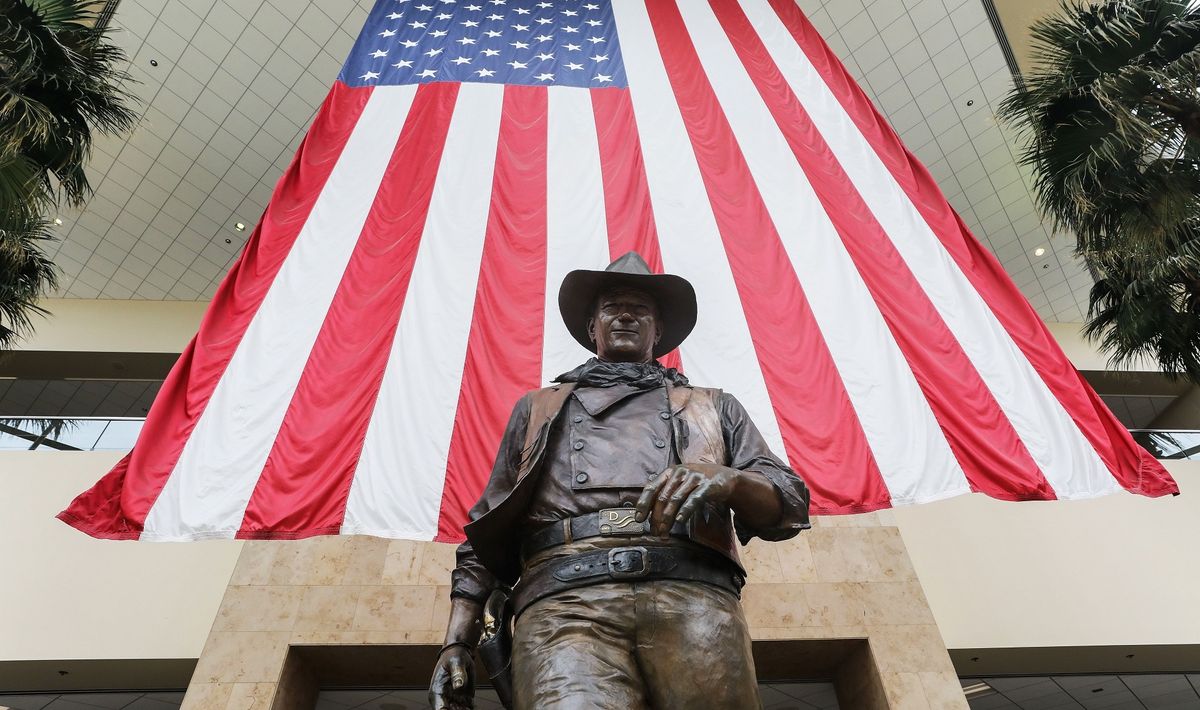 The chairwoman of the Orange County board of supervisors says John Wayne’s name should stay put on the region’s local airport, pushing back against Democrats’ calls for the late actor’s name to be scrapped over comments he made in an interview half a century ago.

On Friday, the OC Democratic Party passed a resolution calling for the name of the John Wayne Airport to be restored to the Orange County Airport, due to Wayne’s “white supremacist, anti-LGBT, and anti-Indigenous views.”

Wayne has been accused of holding bigoted views because of remarks he was quoted as saying to Playboy magazine during a 1971 interview that resurfaced last year, wherein he made controversial comments critical of black people, Native Americans, and homosexual men.

Calls to rename the airport come as institutions across the country have faced scrutiny for names or symbols linked to slavery amid weeks of protests over George Floyd’s death and racial injustice.

But Michelle Steel, who serves as Second District Supervisor for Orange County and chairs the board, said Wayne should be remembered for the contributions he made to their community and the country — and argues the name of the John Wayne Airport should not be changed over his past statements.

John Wayne led the movement to make Orange County home to Vietnamese refugees, he was an ardent supporter of our men and women in uniform, and his family foundation has been a national leader in cancer research.

As an immigrant to our country, I am extremely sensitive to the actions and statements of people who perpetuate and make racist statements. The comments by John Wayne from 50 years ago are wrong and sad from someone who so many people across America hold in high regard.

While I have experienced racism first-hand, I do believe that a person should be judged on the totality of their actions and contributions to society which is why I support keeping the name John Wayne Airport.

John Wayne’s contributions to families in Southern California and across America live on to this day. He personally worked to assist Vietnamese refugees resettle in America, many of whom still live here in Orange County. The John Wayne Cancer Foundation’s investments in research have resulted in groundbreaking treatments and the establishment of a cancer institute in Santa Monica. Because of his dedication to our military and country, Mr. Wayne received both the Naval Heritage Award and the Presidential Medal of Freedom, the highest civilian award in the United States.

John Wayne’s youngest son, Ethan Wayne, also spoke up to defend his father’s legacy on Monday in the face of threats to rename the Orange County airport.

In a statement to Fox News, Ethan Wayne said, “Let me make one thing clear: John Wayne was not a racist. I know that term is casually tossed around these days, but I take it very seriously. I also understand how we got to this point.

“There is no question that the words spoken by John Wayne in an interview 50 years ago have caused pain and anger,” Wayne continued. “They pained him as well, as he realized his true feelings were wrongly conveyed.”

Ethan added, “Those who knew him, knew he judged everyone as an individual and believed everyone deserved an equal opportunity. He called out bigotry when he saw it. He hired and worked with people of all races, creeds, and sexual orientation. John Wayne stood for the very best for all of us — a society that doesn’t discriminate against anyone seeking the American dream.”

Every Day Can Be Black Friday
WHO ‘deliberately’ skips naming new COVID variant with Greek letter spelled same as name of China’s president
Former NYC police  commissioner agrees to testify for Jan 6 committee, but demands an apology for false accusation
CNN analyst says he has ‘no idea’ why smash-and-grab robberies are on the rise even while noting punishment is ‘very minimal’
Psaki Defends Biden Campaign Video Labeling Rittenhouse ‘White Supremacist’