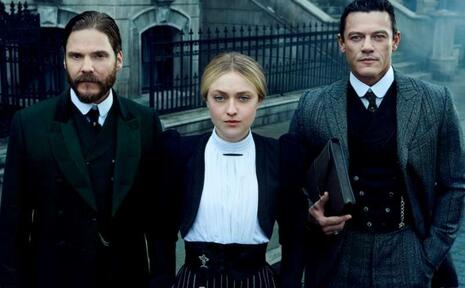 TNT’s The Alienist was already filled to the brim with modern progressiveness, so it only makes sense that its sequel is worse. July 19 saw the premiere of The Alienist: Angel of Darkness, based on the book sequel The Angel of Darkness released in 1997. Like its predecessor, the series is a historic drama that follows the investigation into an unusual murder. Also like its predecessor, it leaves itself open to “obvious” connections.

The two-episode premiere introduces our characters one year later in 1897 New York City. Here, former secretary Sara Howard (Dakota Fanning) is now a private investigator looking into a case involving a missing infant. She re-enlists the help of her friends, New York Times reporter John Moore (Luke Evans) and Dr. Laszlo Kreizler (Daniel Brühl), for what could be a murder spree after another kidnapped infant is found dead (once again in creepy detail). What they find could, in fact, lead into an even deeper conspiracy.

In light of that, the show manages to squeeze in an alarming amount of social issues within a short time-frame. For starters, the missing infant actually belongs to a Spanish dignitary, whose wife is reluctant to believe the police would “provide even one man to find the daughter of their enemy.” She seems to be right when former Police Commissioner Byrnes (Ted Levine) encourages the current police captain to blame a recent murder on the Spanish since “it would be most helpful for the headlines.” With William Randolph Hearst being introduced as a new character on the show, expect more “fake news” like this in the future.

Not to mention this pointed confrontation between a feminist protester and a police officer prior to a woman’s execution.

Keep in mind, 1897 New York City was hardly the bastion of progressive ideals. The budding Spanish-American War did produce escalating tensions towards the Spanish people, and William Randolph Hearst is synonymous with yellow journalism. However, reviews and even interviews with the cast were quick to draw out parallels between the period piece and today.

Indiewire remarks on the show’s “efforts toward being more inclusive and addressing fresh perspectives” with its politics. Salon straight up writes that “‘Angel of Darkness’ may be set in 1897 but the script’s intentional highlighting of the similarities between then and now are obvious.”

In an interview with TV Guide, series actor Daniel Brühl makes it more obvious with the following quote:

“It’s a very sad conclusion, if you think about it, that a story that is set 1897 and a book that was published in the 1990s feels incredibly current in 2020 when you think about racism, when you think about female empowerment and women’s rights, the Yellow Press, the corruption within the police department. We also touched these subjects in season one, but season two felt even more universal and current.

It may shock some people to hear this, but we do not live in 1897, not even close. And yet, that won’t stop the usual suspects from thinking otherwise.