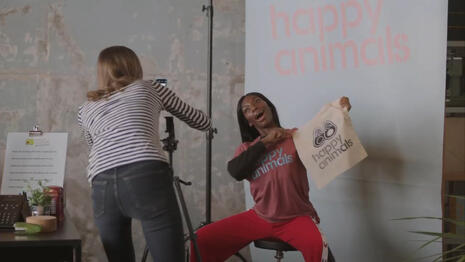 The HBO series I May Destroy You is a complicated and at times nihilistic show set in London exploring the horror of rape. It rightfully calls out sexual violence. However, it also eagerly promotes popular left-wing feminist trends such as a graphic depiction of “period sex.”

In the recent episode, “Happy Animals,” on July 20, the show parroted climate change myths, but then proceeded to acknowledge the ways climate change activists have little concern for the economic effects of their radical ideas.

I May Destroy You’s lead character, Arabella (Michaela Coel), needed money after she failed to finish a draft on schedule for her publisher. Her white friend, Theo, invited her to do work for a vegan delivery company called “Happy Animals.”

The founder of the company told Arabella, “I basically spent three years in uni, uh, just going deep into the existential threat of climate change. So, you know, animal agriculture and eating meat are the biggest threat to global warming, so I created, uh, Happy Animals. Yeah, so people who want to buy vegan products and know what’s out there, know what they can buy.”

He wanted her to be a social media influencer for the company. Arabella, who is black, then made videos promoting the company’s propaganda about future climate catastrophe.

“The thing I’ll miss most after the complete ecological collapse are crops. Because crops bring us yummy vegetables!” she says in one video.

“Indonesia has to move their capital city because the current one is literally sinking,” she says in another.

When Arabella’s friend, Pastor Sampson, finds out at a party where she is working he is shocked. ”Wow, you have now become a climateer?”

“Pastor, for the money,” Arabella replied.

Pastor told her, “Only yesterday a climateer came knocking on my door, saying now is the time to change my car to an electric something, something, something. I just bought a new Mercedes, I worked hard to get it, and you’re standing at my door, telling me to what? Throw away my car! Huh? And what next? Exchange my cow for a carrot. Why must the white man chop at the neck when the Africans only now beginning to swallow, huh?”

“They say because there’s dairy inside,” Arabella answered to the laughter of her other black friends at the party.

“I am tired of white people,” her friend Terri then sighed just before Arabella’s white friend Theo entered.

The blanket statement about white people is never questioned. Pastor Sampson further ripped into the climate activism later at the party.

Arabella: Aah, Samson, it’s not exactly a bad cause because crops are, you know…dying and shit, so…

Arabella: Samson, it’s a thing, you know, planet-wise, we are fucked.

Pastor Samson: Is this what they pay you to say?

Arabella: Theo, back me up?

Arabella: Look. All I’m saying is, if you deep it.

Pastor Samson: Sis, deep history, I beg. Let me tell you something about the vegan, and the climateer.

Pastor Samson: Oh, they love looking into the future. But they don’t care about the past. Because they don’t look too noble back there. It’s our duty to remind them.

Partygoer: May we never forget.

Pastor Sampson: We will count every sin.

Arabella: Whoa, whoa, whoa. How’s that got anything to do with…

Pastor Samson: It is the same manipulative and sociopathic mind that helped them invade, exploit, and rape, all but 22 countries in the world that they’re channeling to invade Hackney, to talk about cows and carrots. (Laughter) It doesn’t matter what it looks like. Jesus, the English language, sports, climate change, the only real agenda is power and worship.

Partygoer: The same way they used the missionaries to spread their “Goodness…”

There is a lot to unpack in that scene. Yes, climate change activism is indeed exploitative and a form of religious worship. It does help to concentrate power and money in influential NGOs and power brokers.

Edicts enacted as a result of climate change hysteria are economically devastating to developing nations in Africa. As Michael Shellenberger, a former climate activist and author of Apocalypse Never: Why Environmental Alarmism Hurts Us All, wrote in Forbes Magazine, “Part of what bothers me about the apocalyptic rhetoric by climate activists is that it is often accompanied by demands that poor nations be denied the cheap sources of energy they need to develop.”

But to wrap that movement in with everything from Jesus to sports is a stunning sweep. It also deprives contemporary Africans and black people in general of any agency in their growing twenty-first century embrace of Christianity and continued love for soccer.

It is deeply disturbing the way Pastor Sampson says, “We will count every sin.” Are white people the only ones with sins against other races and ethnicities? And are their sins alone without any possibility of redemption? The implications of such a warped mindset are visible in the radicalism of the Marxist BLM movement sowing havoc across streets in the United States and the false 1619 Project.

In the end, Arabella mocked the Happy Animals company for trying to use her as a “black face” for a largely white left-wing movement. She devoured chicken for a video in front of their logo.

Nonetheless, the show then showed dramatic images of both drought and flooding in order to keep with the climate catastrophe narrative.

So, in the end, the show chickened-out. It acknowledged that climate activists and white leftists will happily exploit black people and harm developing nations. But it did not dare push back against the false climate narrative just the same.

VILE MSNBC Historian: Honor 9/11 Heroes By Fighting Back Against GOP
Members of Congress, their staffs will be exempt from Biden’s federal vaccine mandate
Put a Rock Where the Kids Can See It
Sanders Rebukes Manchin’s Downsized Ceiling for Reconciliation Bill
WATCH: Student senator caught red-handed removing American flags from 9/11 memorial