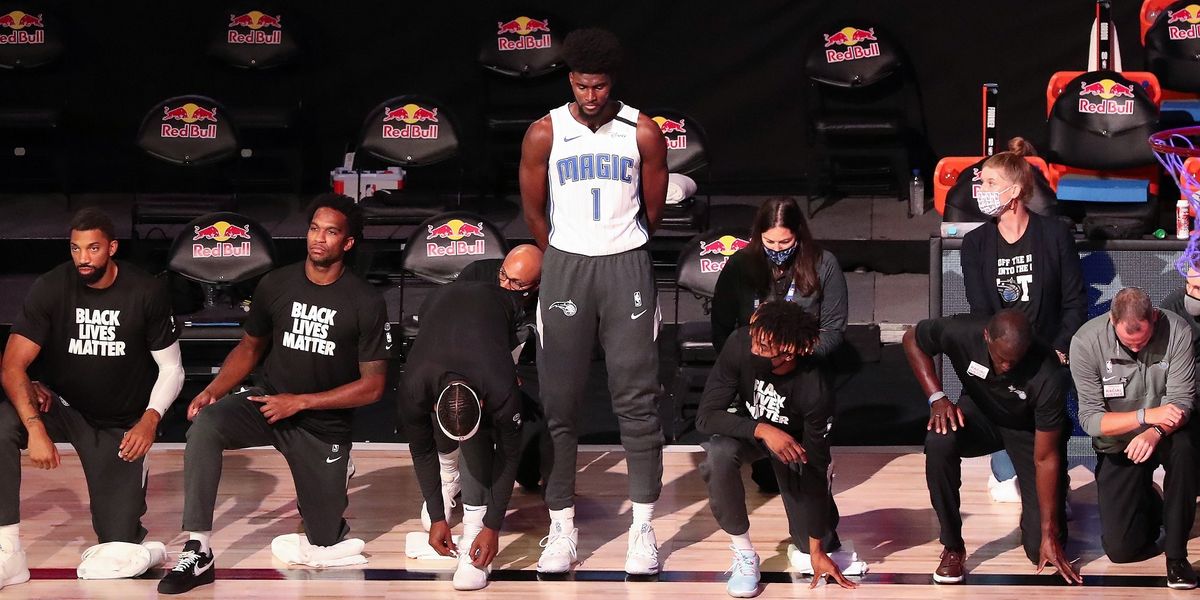 A single player in the NBA has stood alone—literally—during America’s national anthem since games resumed this week after a 20-week break due to COVID-19.

During a press conference on Friday, that player, Jonathan Isaac of the Orlando Magic, explained why.

After noting that he did not kneel during the playing of “The Star Spangled Banner” or wear a Black Lives Matter shirt along with all the other players, a reporter asked Isaac (who is black), if he believes black lives matter.

“Absolutely,” Isaac replied. “I believe that black lives matter. A lot went into my decision and part of it is, first off, it’s my thought that kneeling or wearing a Black Lives Matter t-shirt don’t go hand-in-hand with supporting black lives.”

According to
CNN, Isaac reiterated, “For me Black lives are supported through the Gospel. All lives are support through the Gospel. We all have things that we do wrong and sometimes it gets to a place that we’re pointing fingers at who’s wrong is worst. Or who’s wrong is seen, so I feel like the Bible tells us that we all fall short of God’s glory. That will help bring us closer together and get past skin color, and get past anything that’s on the surface and doesn’t really get into the hearts of men and women.”

He added, “I’m black…I’m not for racism and I don’t think that me not kneeling before the game and wearing a t-shirt makes me mean that at all.”

In a statement on Friday, the owners of the Orlando Magic expressed full support of their players kneeling during the anthem “to send a powerful message condemning bigotry, racial injustice and the unwarranted use of violence by police, especially against people of color.”

The statement did not mention Isaac’s lone stance for the stars and stripes, but
BleacherReport reported that according to ESPN, Magic head coach Steve Clifford said, “himself, the players and the franchise support Jonathan Isaac’s decision to stand during the anthem and not kneel.”

The coach also passed along that Magic guard Evan Fournier said of Isaac’s move, “That’s his choice and he doesn’t need to [explain].”

Jihadi Murderers Feign ‘Reform’ and Fool the Establishment
Kamala Harris’s Relentless Pursuit of Power
Nashville councilwoman wants attempted murder charges for people who don’t wear face mask, pass on COVID-19
Wall of grandma: Two elderly women who stood up to the mob in Portland have become heroes in the neighborhood
Should Judge Sullivan Be Disqualified from Flynn Case? An Appeals Court Is Asking