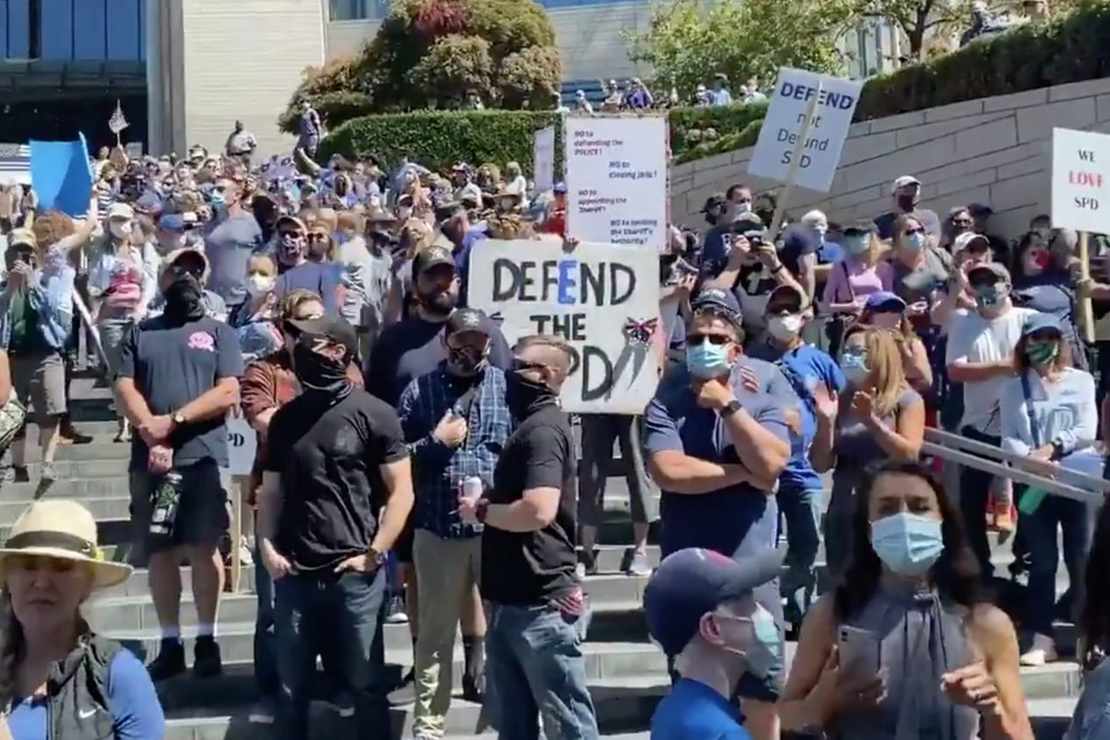 This week, maybe as soon as Monday, the Seattle City Council will vote to lop off several police programs and officers in an effort to “defund” police.

On Sunday afternoon, thousands of Seattleites turned out to “Defend the Police” to try to convince the rabidly leftist supermajority on the council to keep the cops.

Happening Now: Thousands of Back The Blue supporters outside Seattle City Hall defending @SeattlePD. The silent majority has come out stronger than ever! 🇺🇸 pic.twitter.com/UMgg0gGP6C

There to intimidate the thousands pro-police people were dozens of umbrella holding, black-bloc-clad antifa holding an organized hissy fit. Find out the importance of those umbrellas over here.

KTTH radio host Jason Rantz showed a video of antifa demonstrators setting an American flag on fire. One of them thought it would be a great idea to stomp on the flag while it was burning. He didn’t catch fire but did look like he was throwing a toddler tantrum. Watch the video.

Seattle Antifa goons and agitators burn and stomp on an American flag. pic.twitter.com/OBIGsYUs4C

But things got sparky when a woman from the pro-police group came over to put out the fire.
She had to be rescued by police, who, unlike Portland’s police, were actually present and allowed to help those in need.

A woman and reporter are assaulted by Seattle Antifa goons and agitators. She put out the flag that was on fire. pic.twitter.com/rzvT4ETwwg

Seattle council members propose to get rid of 100 officers by layoffs and attrition. The council members have decided to dispense with the police team that cleans up drug-infested homeless encampments. Seattle is already notorious for its horrendous homeless problems. A mini-documentary called Seattle Is Dying received national attention when it revealed the issues on the streets, including the role the city plays in enabling drug addiction among the homeless. Supporters of the cut say the money will go somewhere else to help the homeless.

Related: The Warlord Will See You Now. Armed Rebels Illegally Require ID to Get Into Seattle ‘Autonomous’ Zone

The police department was told to stand down when hundreds of protesters and rioters took over a section of Seattle’s Capitol Hill and vandalized, burned, and intimidated residents in the so-called CHAZ and CHOP zone. Protesters set up mobster-like protection rackets, their own pseudo police force who were complicit in two murders in the zone and oversaw the shootings of several more people.

After the body count started piling up, Mayor Jenny Durkan sent in “people of color” social workers to talk out antifa thugs and Black Lives Matter grifters. Social workers were run out and Durkan’s home became the target of protesters who were led by socialist council member Kshama Sawant, signaling it was time for the cops to clear the zone. Sawant, naturally, wants to defund the cops, too.

Councilmember Lisa Herbold said that “SPD staff, including the department’s chief budget officer, have been consulted about the cuts” but Chief Carmen Best said no talks had taken place; that the council didn’t want her input. Herbold did express her concern to KING 5 News that when Black Lives Matter and antifa demonstrators attempted to track her down at her house in a rural area north of Seattle, they were met by residents with guns.

“We will continue to call for peaceful tactics in all instances,” said Herbold, who expressed concern about what happened at Chief Best’s house. “I’m incredibly saddened by the fact that they were met by individuals in that neighborhood with guns.”

Residents of Seattle and the thousands who turned out on Sunday are incredibly saddened that the taxes they’re paying for the security of police force will get cut.

About three million dollars worth of cuts is expected this year with more than that next year.

So even after the disasters befalling Seattle, leaders there think everything would get great in the Emerald City if they just got rid of the cops. What’s in the water there, anyway?