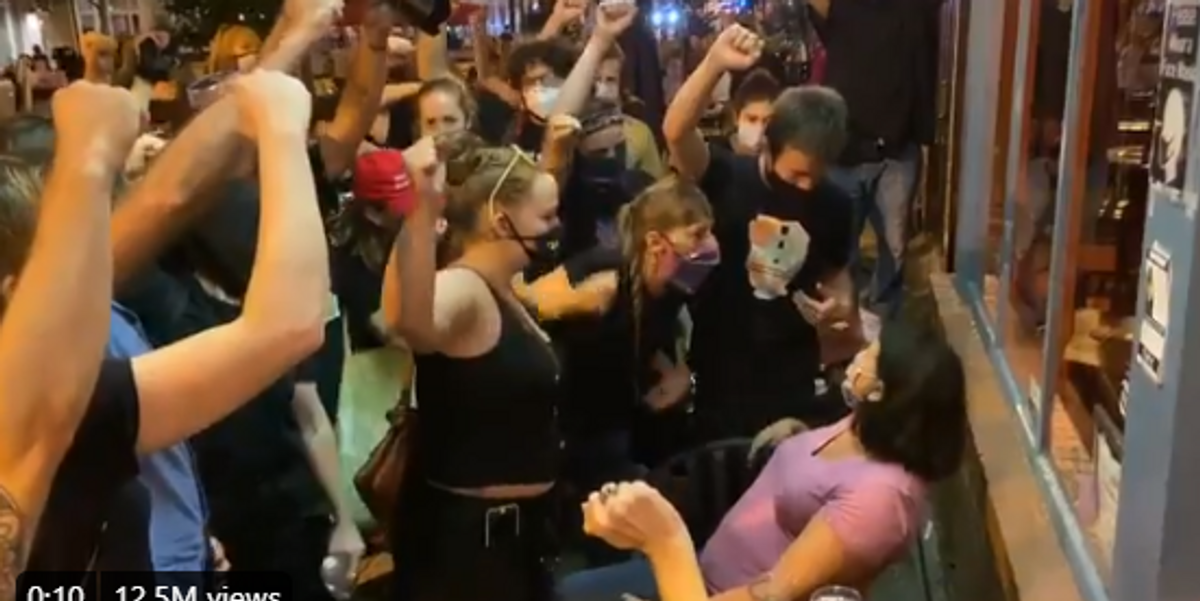 A video of Black Lives Matter protesters harassing diners in Washington, D.C., went viral this week. Mayor Muriel Bowser (D) condemned the behavior seen in the videos and instructed people to call the cops if they are being harassed by abusive protesters.

“What I saw in those videos was highly inappropriate, it was likely against the law if they were on private property but more importantly, I don’t think it had anything to do with demands for social justice,” Bowser said Wednesday, according to Washington Post reporter Fenit Nirappil.

“We would encourage any diner or restaurant to call the police immediately,” Bowser advised.

“I would venture to say that the vast majority of those experiences have been 100 percent positive,” Bowser said of dining experiences in Washington, D.C. “I also don’t think that D.C. residents would be bullied out of living their everyday lives.”

Bowser was reacting to a viral video of a mob of protesters harassing diners in the Adams Morgan neighborhood that was shared by Washington Post writer Frederick Kunkle on Tuesday. Video shows the demonstrators demanding that all of the diners at a restaurant raise their fists in solidarity of the Black Lives Matter movement.

“In Adams Morgan, protesters screamed at Lauren B. Victor for several minutes for refusing to raise her fist with them. ‘Are you a Christian?’ a female protester demanded,” Kunkle said.

1) In a scene that played out several times Monday, a Black Lives Matter protest that began in Columbia Heights con… https://t.co/kAceaq1yEW

“I felt I was under attack,” Victor said, according to Kunkle. “In the moment, it didn’t feel right.”

“I wasn’t actually frightened. I didn’t think they’d do anything to me,” Victor reportedly said. “I’m very much with them. I’ve been marching with them for weeks and weeks and weeks.”

Another video of restaurant patrons being harassed went viral this week. The leftist mob demands that everyone at the restaurant raise their hands in solidarity. When two diners don’t comply, they are shamed and have profanities screamed at them.

Earlier this month, Black Lives Matter protesters harassed people eating dinner in the D.C. neighborhood of Georgetown. The demonstrators also shouted and banged pots in an effort to wake up a residents late at night.

Black Lives Matter protests against police brutality have escalated this week following the police shooting of Jacob Blake in Kenosha, Wisconsin. Blake is paralyzed from the waist down, according to his father.

Through an Immigrant’s Eyes
The Fringe With Megan Fox, Episode 74: A Lawyer’s Perspective on the Family Court Cartel
Wilder, Not Gentler: The Nation’s First Elected Black Governor vs. Terry McAuliffe
Democrats Obscure Their Stand on Voter ID, with Help from the Press
Facebook Finds Itself in Turmoil After Document Leaks