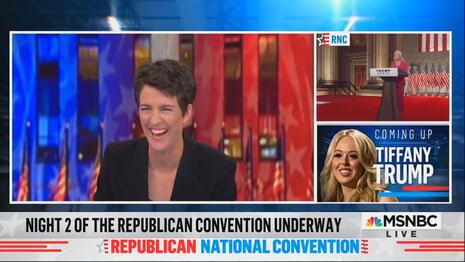 If you want a clear example of the unmitigated hypocrisy and sheer partisan hackery of MSNBC, there is no clearer example than the disparity between how the liberal cable channel covered the Democratic National Convention last week and the Republican edition this week. During the DNC, MSNBC aired 90 percent of the convention with no commentary or analysis. The hosts just let the speeches play.

So far during the Republican convention, just over the first two nights, MSNBC has interrupted for a total of 71 minutes and 16 seconds. That’s out of a possible 302 minutes. On Monday night, MSNBC broke in for 33 minutes and 50 seconds (out of a total of 144 minutes). On Tuesday, the network bested that, interrupting for 37 minutes and 26 seconds.

Here’s a montage of Maddow constantly jumping in to interrupt:

Most of the interruptions came from Maddow. She showed clear contempt for the whole proceedings. At one point, after former Florida Attorney General Pam Bondi spoke, Maddow simply broke out laughing. She then mocked, “We had wondered why this was the one speech they didn’t give any advance excerpts or any advance text for. Now we know.”

On Monday, the MRC’s Rich Noyes wrote in a NewsBusters study: “Last week, CNN and MSNBC let their audiences see roughly 90 percent of the Democratic video show that stood in for this year’s national convention, without any meaningful interruptions.” So far, MSNBC has only aired about 78 percent of the DNC. On the first night of the Democratic convention, the network aired, interruption-free, 125 minutes out of a possible 132. On the second night of the DNC, MSNBC aired 125 out of 143.

CNN by contrast, interrupted the GOP convention far less than MSNBC’s 71 minutes. Just 30 minutes and 43 seconds over two nights. On Monday night, CNN cut in for 17 minutes and 25 seconds and 13 minutes and 17 seconds on Tuesday.

Tide and Facebook were sponsors for the MSNBC hypocrisy.