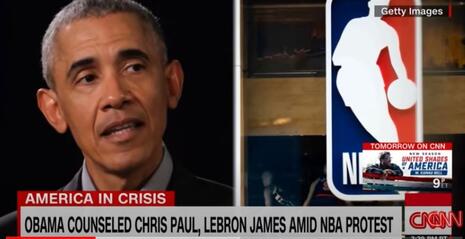 CNN portrayed it as an “American crisis”: NBA players receiving counsel from their favorite former president — Barack Obama. At his bidding, the league lurched even further to the Left. At the same time, former NFL player/protester Colin Kaepernick thanked the NBA for moving the ball forward in the fight against systemic racism.

CNN showed a photo (right) of the former president along with an NBA logo and the caption “America In Crisis … Obama counseled Chris Paul, LeBron James amid NBA protest.” Just a wee bit of ridiculous melodrama here?

SBNation’s Ricky O’Donnell reported that during their Wednesday-Friday meltdown and playoff game boycotts last week, NBA players had a tense meeting to decide the next steps to maintain their Black Lives Matter focus. Some angry players wanted to throw in the towel on the season. LeBron James, Chris Paul and a few other player/protesters appealed to an elder basketball statesman — former President Barack Obama — for wisdom and direction.

Obama advised the players to return to the courts, resume the playoffs and to start an NBA social justice coalition. Katie Hill, an Obama spokesman, gave a statement to CNN about his high-level basketball summit with NBA social justice warriors:

“As an avid basketball fan, President Obama speaks regularly with players and league officials. When asked, he was happy to provide advice on Wednesday night to a small group of NBA players seeking to leverage their immense platforms for good after their brave and inspiring strike in the wake of Jacob Blake’s shooting.

“They discussed establishing a social justice committee to ensure that the players’ and league’s actions this week led to sustained, meaningful engagement on criminal justice and police reform.”

Thank God the ex-president wasn’t encumbered by any heads of state contacting him for counsel on world affairs and his calendar was free to advise NBA leaders on the state of basketball. Especially in this “American crisis.”

After counsel with that lofty source of basketball and social justice wisdom, the NBA playoffs did resume Saturday. Now that the dust has settled and the social justice snowflakes have had their tantrum, cleared their collective heads and determined a future course, here’s what they decided to do.

The NBA will form a social justice coalition that will seek to increase voting access, engage in civic involvement and work for police and prison reform. Team governors will work with election officials to turn their arenas into polling places on Election Day. All of this has the full approval of along-for-the-ride NBA Commissioner Adam Silver.

Capping the NBA’s great weekend of social justice decision-making at Disney World, James received a letter from Kaepernick expressing his appreciation to the Lakers star and unofficial director of the NBA for furthering the Marxist-inspired Black Lives Matter anthem kneeling movement he started in 2016:

“Four years ago on August 14, 2016, I began protesting against systemic racism and social injustice. Truth is what I sought. Solidarity is what you showed me. Love is what moves us forward.

”Thank you for staying with me.”

It’s ironic that Kaepernick’s name came up in connection to the NBA story now because more and more professional athletes are looking and acting like him with each passing week.