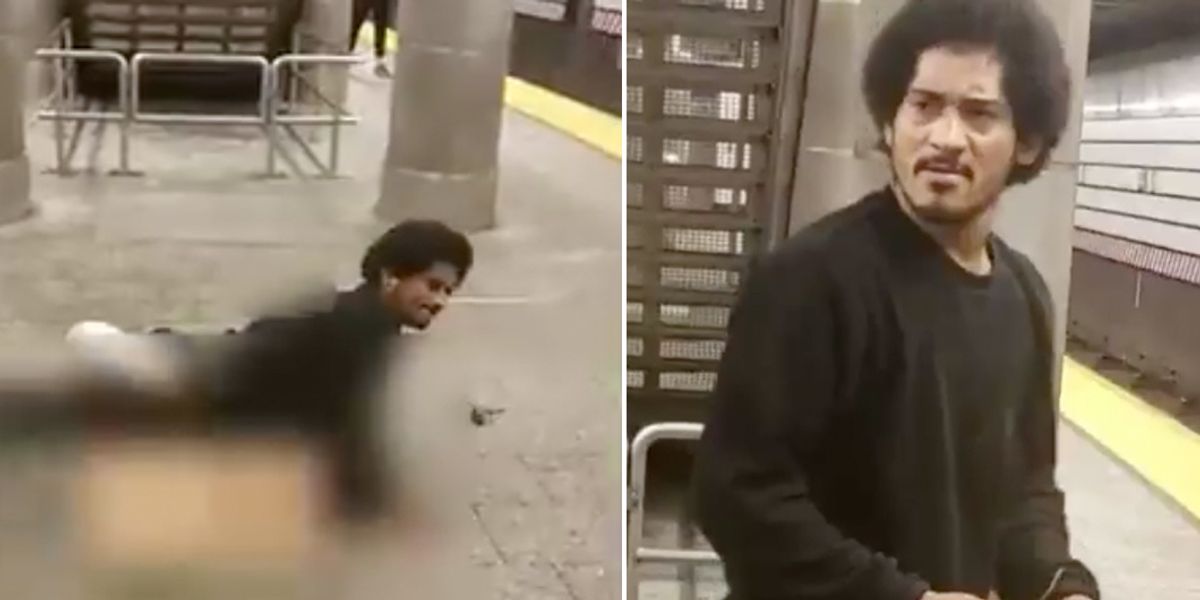 New York City police are frantically searching for a suspect who was caught on camera attempting to rape a woman in broad daylight.

The heinous incident happened Saturday around 11 a.m. on an Upper East Side subway platform. According to WNBC-TV, the 25-year-old victim was waiting for her train when a man shoved her to the ground and began assaulting her.

Police said the man attempted to rape her in broad daylight, and only stopped when a crowd of bystanders confronted him. The witnesses, however, did not directly intervene; one man was seen in a video of the incident just staring in the direction of the suspect and victim.

Video shows the man get off the woman, pick up his sunglasses, turn toward the bystanders and mouth several words. It is not clear what the suspect said because the video released by the NYPD did not contain audio.

The suspect, a black male with an afro and facial hair, fled the scene. Police are asking that anyone with information about the brazen attack to come forward or call 800-577-TIPS.

We’re seeking the public’s help finding this man, wanted for attempted rape after this brazen and brutal sexual ass… https://t.co/ylxhFjskas

Abbey Collins, a spokesperson for the MTA, told WNBC, “This is disturbing and disgraceful. No one should ever have to experience this type of horrific attack in the transit system. The MTA is working closely with the NYPD to find the suspect and hold him accountable to the fullest extent of the law.”

Amid the coronavirus pandemic and unrest in cities across America, New York City has been experiencing a record-setting crime wave this summer. Violence crime is up across the city, but shootings and homicides are experiencing the greatest year-over-year increase.

City leaders have responded by further slashing the police budget — not imposing law and order.

“We are reducing the size of our police force by not having the next recruit class. We are reducing our overtime levels. We’re shifting functions away from police to civilian agencies,” Mayor Bill de Blasio said in July, NPR reported.

“We think it’s the right thing to do. It will take work,” he added. “It will take effort and we’re going to be reforming that work in the meantime.”

Following the tragic death of George Floyd, progressive activists across the country called for police agencies to be defunded. Progressive leaders like de Blasio have responded by mostly obliging activist demands.

George Takei of ‘Star Trek’ fame calls William Shatner ‘a cantankerous old man’
Video: Fugitive hiding under mattress opens fire on cops who were searching for him. It doesn’t end well for suspect.
Fairfax County Schools To Use ‘Assigned Females/Males’ in Sex Ed
House Dems Will Never Compromise, so They’re Calling on the GOP Majority To
Tom Hanks is selling coffee for a good cause