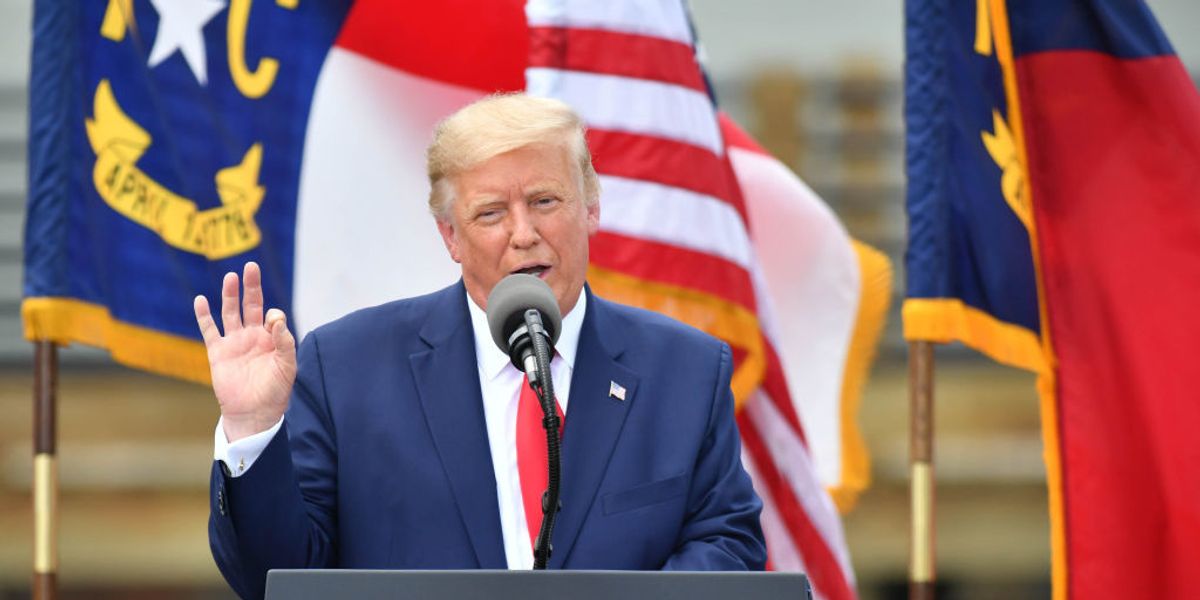 President Donald Trump encouraged North Carolina voters to test the voting system during the 2020 presidential election. He advocated that voters send in their mail-in ballots early, but to also attempt to vote in-person to see if the mail-in ballot had been tabulated.

Critics said Trump instructed voters to vote twice, which is illegal, but the White House refuted the idea that the president was telling supporters to do “anything unlawful.”

President Trump visited North Carolina on Wednesday to deliver a speech at the Battleship North Carolina to commemorate the 75th anniversary of the end of World War II. Upon arriving at the Wilmington International Airport, Trump addressed a crowd that gathered to welcome the president. He suggested that voters test the integrity of the voting system.

“If you get the unsolicited ballots, send it in, and then go — make sure it counted,” Trump told his supporters. “And if it doesn’t tabulate, you vote. You just vote. And then if they tabulate it very late, which they shouldn’t be doing, they’ll see you voted, and so it won’t count. So, send it in early, and then go and vote. And if it’s not tabulated — you vote. And the vote is going to count.”

President Trump doubled down on his notion of testing the integrity of the system by voting via mail-in ballot, but also attempt to vote in-person if the mail-in vote was not tallied.

“I don’t like the idea of these unsolicited votes. I never did. It leads to a lot of problems,” Trump added. “They’ve got 11 problems already on very small contests. I’m not happy about it. At the same time, we’re in court with a lot of it. We’re going to see if it can be stopped.

“But send in your ballots, send them in strong, whether it’s solicited or unsolicited,” the president concluded. “The absentees are fine, we have to work to get them; you know it means something. And you send them in, but you go to vote. And if they haven’t counted it, you can vote. That’s the way I view it.”

52 U.S. Code § 10307 prohibits voting more than once, unless “all prior ballots of that voter were invalidated.”

Whoever votes more than once in an election referred to in paragraph (2) shall be fined not more than $10,000 or imprisoned not more than five years, or both. The prohibition of this subsection applies with respect to any general, special, or primary election held solely or in part for the purpose of selecting or electing any candidate for the office of President, Vice President, presidential elector, Member of the United States Senate, Member of the United States House of Representatives, Delegate from the District of Columbia, Guam, or the Virgin Islands, or Resident Commissioner of the Commonwealth of Puerto Rico. As used in this subsection, the term ‘votes more than once’ does not include the casting of an additional ballot if all prior ballots of that voter were invalidated, nor does it include the voting in two jurisdictions under section 10502 of this title, to the extent two ballots are not cast for an election to the same candidacy or office.

North Carolina Board of Elections Executive Director Karen Brinson Bell issued a letter about voting more than once.

“It is illegal to vote twice in an election. N.C.G.S. § 163-275(7) makes it a Class I felony for a voter, ‘with intent to commit a fraud to register or vote at more than one precinct or more than one time…in the same primary or election,'” the letter read. “Attempting to vote twice in an election or soliciting someone to do so also is a violation of North Carolina law.”

“There are numerous checks in place in North Carolina that prevent people from double voting,” Bell wrote. “Electronic pollbooks with information about who has already voted are used at every early voting site. If a voter tries to check in who has already voted, they will be prevented from voting a regular ballot. A voter will be offered a provisional ballot if they insist on voting, and this ballot will be researched after Election Day to determine whether it should be counted.”

The North Carolina State Board of Elections website states, “If someone has voted an absentee ballot and then shows up to vote in person, the check-in system will alert the poll worker that the person has already voted.”

“Well, I don’t know exactly what he was saying,” Barr said of Trump’s remarks. “But it seems to me what he’s saying is he’s trying to make the point that the ability to monitor this system is not good and if it was so good, if you tried to vote a second time, you would be caught if you voted in-person.”

Then Barr vigorously condemned anyone advocating for mail-in voting and said lawmakers are “playing with fire” because of the threat of widespread fraud.

“This is playing with fire. We’re a very closely divided country here. And people have to have confidence in the results of the election and the legitimacy of the government, and people trying to change the rules to this to this methodology which, as a matter of logic is very open to fraud and coercion, is reckless and dangerous and people are playing with fire,” Barr said on CNN’s “The Situation Room with Wolf Blitzer.”

“The only time the narrative changed is after this administration came in. But elections that have been held with mail have found substantial fraud and coercion,” Barr explained. “For example, we indicted someone in Texas — 1,700 ballots collected from people who could vote — he made them out and voted for the person he wanted to, OK, because, that kind of thing happens with mail-in ballots.”

Blitzer claimed that there is no evidence of widespread mail-in voting fraud.

“We haven’t had the kind of widespread use of mailing ballots as being proposed,” Barr replied. “We’ve had absentee ballots from people who request them from a specific address. Now what we’re talking about is mailing them to everyone on the voter list when everyone knows those voter lists are inaccurate.”

On the topic of media coverage, the attorney general told Blitzer, “The media should be fair and balanced no matter who the president is. [It] doesn’t give the media license to lie the way a lot of the media is.”

“I can speak for us, we are fair and balanced,” Blitzer said of CNN.

Barr responded with a chuckle and said, “OK.”

White House press secretary Kayleigh McEnany said that President Trump was not advocating that people “do anything unlawful” when it comes to voting.

“The president is not suggesting anyone do anything unlawful. What he said very clearly there is make sure your vote is tabulated and if it is not, then vote,” McEnany said Thursday in an interview on Fox News.

“Basically, when you get an absentee ballot and you send it in, there are poll books and it is recorded that you have in fact voted,” McEnany added. “And if you show up at a polling site, they look at the poll book and say your vote has been counted. He wants verification.”

Kayleigh McEnany on Trump urging his supporters in North Carolina to vote twice, which is a felony: “The president… https://t.co/A5daElmLpT

Flu Vaccine Mandates Have Arrived: Your Body, Not Your Choice
WATCH: Trapped by the Taliban: One Woman’s Escape from Afghanistan
Texas Gets A Win In Lawsuit Over ‘Free Speech’ Law
Southwest Airlines backs down from vaccine mandate after massive protests
Australian tyrants promise to FLOOD the country with virus-transmitting vaccinated people… global biowar aims to REMOVE humanity before the coming “big event”