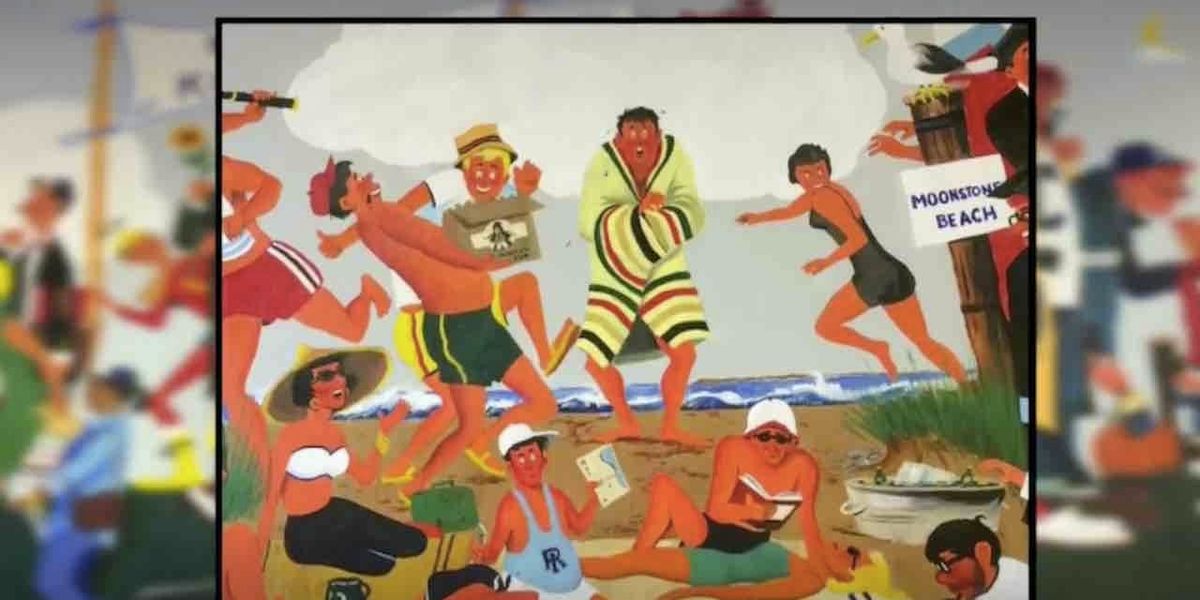 Seems a nearly 70-year-old set of murals at the University of Rhode Island is slated for the dust bin of history.

We’ll let Kathy Collins, the school’s vice president of student affairs, fill you in on the reason.

“I have received complaints about the murals that [they] portray a very homogeneous population … the persons painted and depicted on the wall are predominantly white, and that does not represent who our institution is today,” Collins
told WJAR-TV. “Some of our students have even shared with us they didn’t feel comfortable sitting in that space.”

So now banners cover the murals, which were painted on plaster on two of the walls, the station said.

“I think we have to recognize the horrible incidents [involving] George Floyd, Breonna Taylor, and most recently Jacob Blake in Kenosha, Wisconsin, during this … heightened time, and we as an institution have to look at the systems in place across this institution that maybe are not representing who we are today and representing the true diversity of URI today,” Collins added to WJAR.

When veterans returned from World War II and enrolled at URI, they and other community members raised money in memory of those who lost their lives in the war — and result was the construction of a modern student union, and Memorial Union was dedicated in 1954, the station said.

Arthur “Art” Sherman was a decorated veteran and member of the class of 1950, and he was asked to paint murals for new student union, WJAR said.

“Oh, I loved painting that, yeah,” Sherman, now 95 years old, told the station. “I never had any formal education in painting, by the way; I just used to cartoon.”

The murals depict returning servicemen, a class reunion, a URI commencement, a beach scene, and students piled into a car donned in letter sweaters, WJAR said.

“Well, it depicted that era,” Sherman recounted to the station. “A lot of students, friends of mine, would come by and say, ‘Why don’t you do this, why don’t you do that?’ So, that’s what I did, so everybody chipped in.”

Then came the complaints

Collins noted to WJAR that she’s been working for URI for the last four years and has received complaints from students about the murals — and the school decided it wanted to start fall classes without the murals in sight.

But the artist’s family doesn’t agree.

Pamela Sherman, Art Sherman’s daughter, told WJAR that her family doesn’t agree with the decision to remove the murals.

Art Sherman ought to know, as he ended up becoming a professor of physical education at URI, where he worked for 30 years, the station said.

When WJAR asked him what he thought about his murals being removed, he smiled and laughed.

“That’s a good question. Time goes by, and things change,” he said.

But his daughter wasn’t as diplomatic.

“It’s terribly upsetting, and we grew up with those murals being there,” Pamela Sherman told the station, adding that “we never want to forget our past.”

Collins told WJAR that photographs of the murals “will be included in any celebration of … the Memorial Union” and that the school will “always recognize” Sherman’s work.

“Wouldn’t it be a mistake if we look back 100 years from now and say, ‘Isn’t it a tragedy that we lost this artwork?'” she asked the station. “It’s like any work of art, especially a painting — seeing a picture of it [is] just no comparison [to] seeing it live.”

Video of Then-Senator Biden and Son Hunter on Crack Is Absolutely Brutal
VIDEO: Crowder opens up about the time he learned he was on an ISIS kill list
PolitiFact Tags It FALSE That Biden & Harris ‘Distrusted COVID-19 Vaccines’ in 2020
Republican Jake Ellzey Beats Trump-Backed Candidate in Texas House Runoff
NewsBusters Podcast: Return of the Masks, Our Bias-Busting Interns