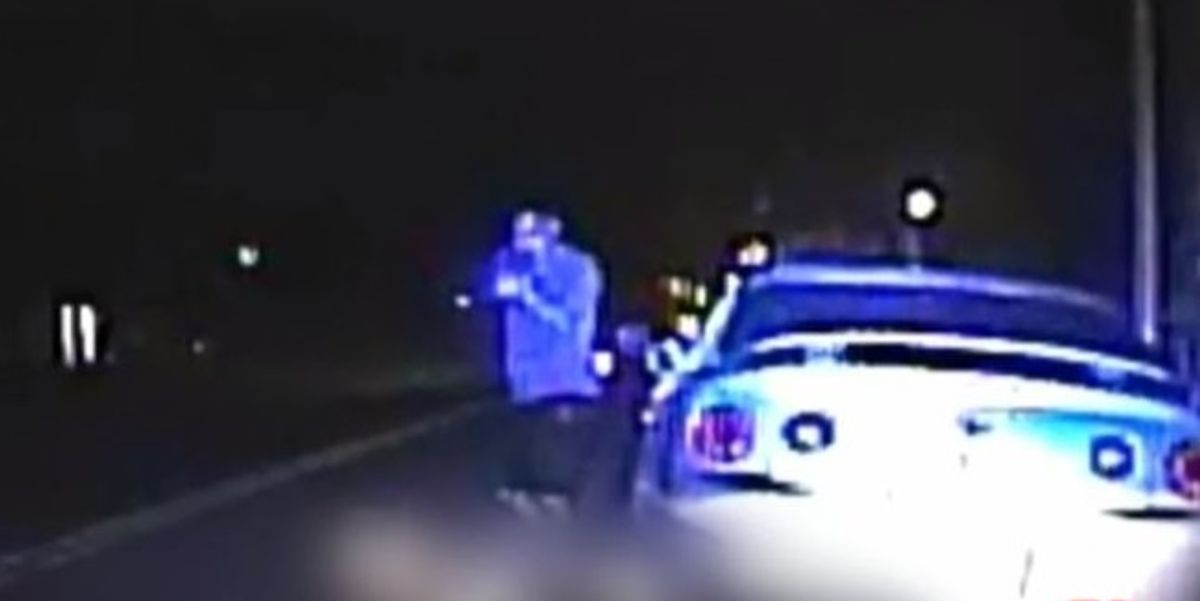 A Tulsa County district judge ordered video footage released this week that shows two officers being shot by a suspect during a routine traffic stop that left one officer dead.

The footage is extremely graphic, and some authorities have condemned its release, but Judge William Musseman determined that the public has the right to see what exactly happened during the horrific traffic stop that occurred in June.

KWTV-TV reported on Monday that Tulsa Police Chief Wendell Franklin held a news conference using slides and describing key parts of what happened after Officer Aurash Zarkeshan stopped convicted felon David Ware — who had expired tags, no driver’s license and no proof of insurance — and Sgt. Craig Johnson responded to the stop on June 29.

Ware’s attorney argued that parts of the original affidavit against his client were inaccurate, and that Ware was “painted in the worst light,” according to the outlet.

Ware, 33, is currently awaiting trial on charges of first-degree murder, drug possession with intent to distribute, and possession of a firearm after a felony conviction, the StarTribune reported. He scheduled to appear in court Oct. 5.

Franklin argued that the video footage should only be shown in a courtroom but released it at the judge’s request. During Franklin’s description of what happened, he noted, “Our officers gave more than 40 commands — 40 times they asked him to exit that vehicle before they used any type of force. Seven times [the suspect] was warned before he was ‘tased.'”

Tulsa Mayor G.T. Bynum (R) released a statement on the video suggesting, “If you do not have to watch this video for your job, don’t watch it.”

He added, “I have to watch a lot of body camera footage as part of my job. I can only think of two times in my life — upon the death of family members — when I wept like I did watching the conclusion of this video. It is terrible.”

TheBlaze viewed the video, which was posted by TexAgs. It is graphic and extremely “disturbing,” as the site describes. The footage shows the suspect refusing officers’ repeated commands and arguing with them.

For several minutes, the officers pleaded with Ware to exit his car. Eventually, they deployed a Taser on him and thereafter used pepper spray in an effort to get him to comply. Finally, the officers tried to pry Ware out of the vehicle, and the suspect is then seen pulling out a firearm and firing several times, striking both officers.

Sgt. Johnson later died from his injuries and Officer Zarkeshan was critically injured.

TheBlaze‘s Jessica O’Donnell wrote on Twitter, “This is what [officers] face on a daily basis. Tasers and pepper spray often don’t work. Remember this scene when you are quick to condemn officers in escalating situations.”

Amy Swearer, a legal fellow at The Heritage Foundation, compiled a list of scenarios in a Twitter thread showing several other instances where officers were shot during traffic stops, saying those cases “flashed through [her] mind,” after watching the video of Zarkeshan and Johnson’s traffic stop.

“This matters,” Swearer wrote. “I’m tired of people pretending that every police shooting victim is Breonna Taylor sleeping innocently in her bed. I’m tired of a one-sided conversation on policing where the civilian’s actions aren’t scrutinized, or the officer’s legitimate fears acknowledged.”

This writer remembers when an idol of hers — Officer Molly Bowden, whom she met at 4-H camp at the age of 12, was killed 15 years ago after being shot by a man during a routine traffic stop.

The following morning, the suspect shot and wounded a second Columbia officer who was staking out his mother’s home. The suspect then committed suicide.

Officer Bowden eventually succumbed to her injuries one month later. Her end of watch was Feb. 10, 2005.