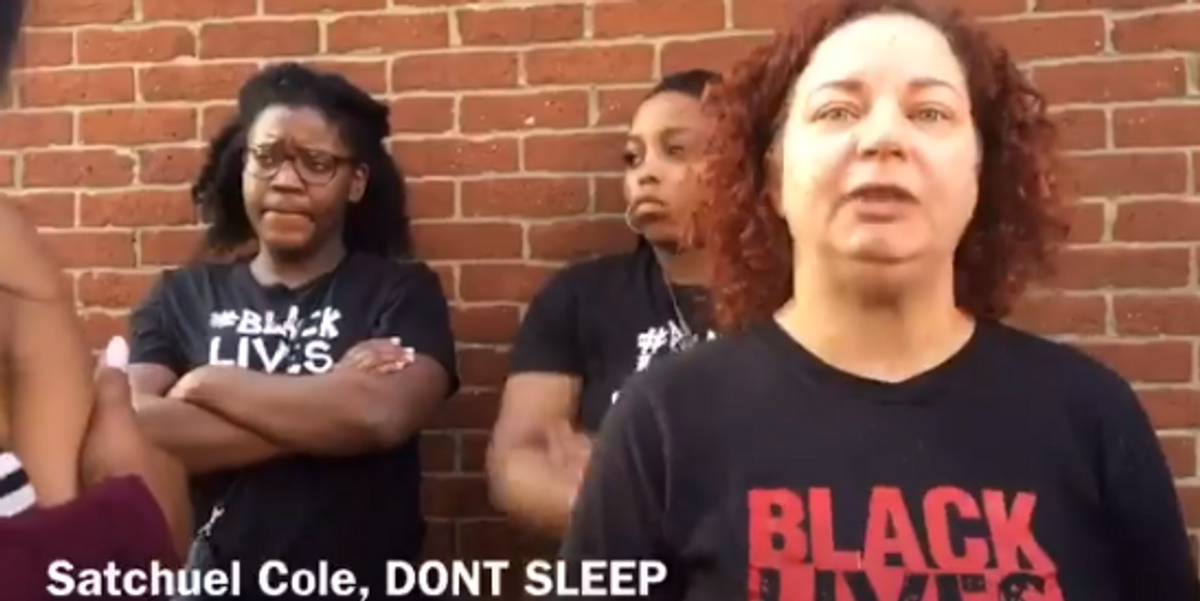 Satchuel Cole was a member of Indy10 Black Lives Matter and the Indy SURJ, an Indianapolis-based chapter of Showing Up for Racial Justice, a “national network of groups and individuals working to undermine white supremacy and to work for racial justice.”

On Wednesday, Cole revealed that she had been lying about her race and offered an apology on a Facebook post.

“Friends, I need to take accountability for my actions and the harm that I have done,” Cole wrote. “My deception and lies have hurt those I care most about. I have taken up space as a Black person while knowing I am white. I have used Blackness when it was not mine to use. I have asked for support and energy as a Black person.”

“I have caused harm to the city, friends and the work that I held so dear,” Cole continued. “I will do the work to take responsibility for my actions and try to reduce the harm that I have already caused.”

Cole was forced to confess that she had committed racial fraud after she was exposed in an article titled “Shocking Details Emerge on Indy Activist Who Faked Life as a Black Woman” published on BlackIndyLIVE.

Cole allegedly told multiple people that she was from a biracial family and that her father is black. BlackIndyLive reported that Cole’s parents “indicated their races as white on legal documents.”

The Indy10 Black Lives Matter group issued a statement on the situation.

“Satchuel Cole is not a member of Indy10 Black Lives Matter and has not been a part of any community initiatives for several months,” the statement on Facebook said. “We found out about her deceit at the same time that most people did, in the last week.”

In May, the Central Indiana Community Foundation awarded more than $1 million in responsive grants to several Marion County’s non-profit organizations during the coronavirus pandemic. Cole’s No Questions Asked Food Pantry received $35,000 in funding from the CICF, according to the IndyStar.

“[W]e are disappointed that we have another instance of a white woman claiming to be a Black woman and it continues to perpetuate issues that we see in the community and it creates divisiveness,” Pamela Ross, vice president of opportunity, equity and inclusion at CICF, told the IndyStar.

“This situation has created a different level of conversation about telling the truth,” Ross said. “We are looking at leaders and at how many leaders of color actually are running these organizations. That does matter, but it does not matter in an application, it matters in the conversation because we want to influence more leaders of color.”

Cole was the spokesperson for the family of Aaron Bailey, a 45-year-old who was shot and killed by two Indianapolis Metropolitan Police Department officers following a traffic stop in June 2017.

Satchuel Cole, VP of social-justice organization DONT SLEEP, was critical of the city: “I don’t understand why we c… https://t.co/VhEMz29qkH

Cole, who is also an active member of the LGBTQ+ community, was a grand marshal of this year’s Indy Pride Parade.

According to a civil court docket, Cole was born “Jennifer Lynn Benton” and identified as a white female on paper before 2010. She changed her name in Hamilton Circuit Court to “Satchuel Paigelyn Cole,” a reference to legendary Negro League pitcher Leroy Robert “Satchel” Paige and Benton’s close friend, Chantelle-Owens-Cole.

Crystal Turner, who knew Cole, said she felt betrayed by her racial misrepresentation.

“She said it was to discuss BLM and the first thing I asked was ‘Why is this Black Lives Matter meeting being ran by a white woman?’ But she explained her lie of a story and she had enough other people betrayed that they vouched for her,” Turner said. “And she would constantly acknowledge she was able to pass for white … and how she had to use that to help others.”

“So I’m sure a lot of people, like I did, just thought she was really aware of her privilege as a biracial Black woman, not that she was a white woman just pretending for years,” Turner said of Cole.

This is the latest case of white women pretending to be black. Jessica Krug, a white associate professor at George Washington University, revealed earlier this month that she was pretending to be a black woman.

CV Vitolo-Haddad, a white University of Wisconsin-Madison graduate student, resigned this week from a teaching assistant position after she was caught pretending to be a black person.

Trump Campaign Breaks Online Fundraising Record In 24 Hours Following The Final Debate
Chelsea Handler scolded 50 Cent for supporting Trump: ‘I had to remind him that he was a black person’
Joe Buck and Troy Aikman caught in hot mic moment ridiculing the military flyover before NFL game
The Pollster Who Thinks Trump Is Ahead
A President Biden Would Be Disastrous on Energy