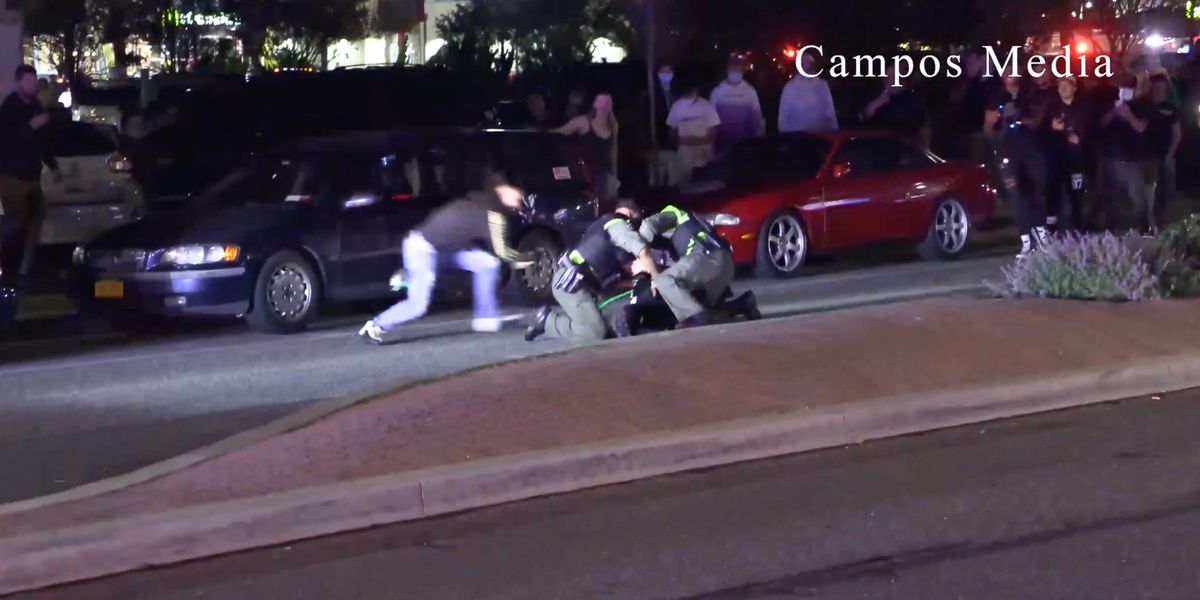 A raucous melee broke out in Ocean City, Maryland, on Friday night during an unauthorized pop-up car rally event.

Though unauthorized, the annual weekend-long event — titled H2Oi — draws hundreds and sometimes thousands of attendees from across the region.

Viral video caught the moment a suspect launched himself out of the crowd and onto the back of a Maryland law enforcement official who was attempting to detain another suspect.

According to a Saturday morning report from The Delmarva Daily Times, the incident — which reportedly took place near Baltimore Avenue in Ocean City — sparked a large police presence that resulted with one suspect jumping onto the back of a police officer during a scuffle.

It is unclear at the time of this reporting why officers were attempting to detain the first suspect.

The media page captioned the video, “The police have their hands full this evening as a result of the unsanctioned H2O event being held in Ocean City. The video below shows footage of a police officer being assaulted by a young man.”

What is in the video?

The video begins by showing what appears to be illegal fireworks shooting across the sky. The town’s streets are lined with rally-goers who begin shouting and congregating as a Maryland State Police cruiser quickly flies onto the scene.

“Run! Run!” members of the crowd shout in the video.

Two Maryland State Police officers can be seen exiting the vehicle, and begin detaining what appears to be a male, who runs from the officers and into the road. Congregants can be heard screaming and hysterically cheering as officers tackle the suspect onto the pavement.

As the officers’ backs are turned, a second unidentified person, who also appears to be male, flies out of the crowd and jumps onto the back of at least one of the state troopers. A group of officers then engage the second suspect in a desperate struggle to cuff him, and even more officers, who arrived on the scene, fight to contain both the first and second suspects.

The video then shifts focus to the altercation between the second suspect and the officers.

As the officers converge on the second person, what appears to be a glass bottle flies from the crowd and smashes on the pavement, showering those in the area with glass fragments, just inches from where the police were seconds before.

The crowd’s presence thickens, and people can be heard screaming and shouting “police brutality” as the second suspect fights back and rolls around on the ground, engaging with police.

Sirens can be heard approaching the scene as the officers scuffle to cuff the second suspect.

Police are eventually successful in cuffing both suspects, and several masked officers approach the crowd — a portion of which are closing in to get a better look at this point — with what appears to be an aerosol spray canister.

Members of the crowd erupt with profanity. One man shouts, “Suck a d***, b****!” as the officer attempts to drive the crowd back.

“F*** you and your mama!” another man can be heard yelling.

According to the Daily Times, police were forced to close down the intersection of Baltimore Avenue and 30th Street in the coastal beach town to break up the unruly crowd.

The outlet reported that following the incident, police were forced to deal with “disorderly crowds” in the area of the scuffle.

“One officer approached the sidewalk shouting for people to leave as he began to spray a smelly substance to encourage them to disperse, yet many lingered, changing [sic], ‘H2O! H2O!” the outlet reported.

TheBlaze reached out to the Maryland State Police, which directed all press inquiries to the Ocean City Police Department.

The Ocean City Police Department did not provide a statement in time for publication.

You can watch the full video here, which has been viewed more than 474,000 times at the time of this reporting.

According to WTTG-TV, Meehan said that it was especially problematic this year, amid the COVID-19 pandemic, for rally-goers to converge on the small beach town.

Meehan said that in 2019, authorities handed out approximately 1,400 citations and arrested more than 100 people.

WTTG reported that a “large contingency of law enforcement officials” would be waiting for the rally-goers in Ocean City, and Chief Ross Buzzuro said that hundreds of officers are set to be on duty throughout the weekend.