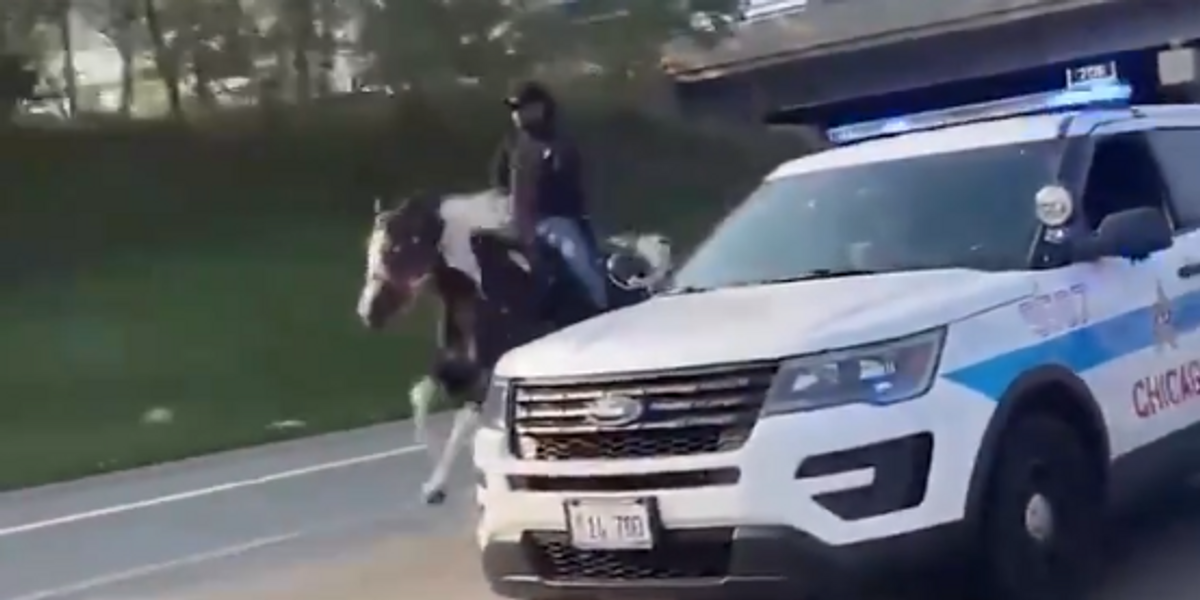 NuNu is an American Paint horse that made headlines last week after being forced to gallop for more than seven miles on a paved highway in Chicago, despite not being outfitted with proper shoes for pavement. NuNu was running down the Dan Ryan Expressway on Monday, where witnesses claim they saw the rider kick and whip the horse to make it continue to run despite being injured and suffering from exhaustion. The horse finally collapsed to the ground.

The horse’s rider, 33-year-old activist Adam Hollingsworth known as the “Dread Head Cowboy” and “Census Cowboy,” was arrested and charged with one count of aggravated animal cruelty, a class 4 felony. He was also charged with misdemeanors, including reckless conduct, disobeying a police officer, criminal trespass to state-supported property, obstruction of traffic, and operating a non-highway-vehicle on a highway.

Hollingsworth said that he rode the horse as a way to bring awareness to the #KidsLivesMatter movement, self-described as an initiative “that aims to raise awareness and motivate residents to fill out the census to help communities receive better funding.”

A man riding a horse held up traffic on Monday – on a Chicago highway. The so-called “Dreadhead Cowboy,” who is als… https://t.co/OoEcKe9yQV

Initial reports stated that NuNu was in critical condition due to its injuries, and may even need to be euthanized.

There is good news that NuNu’s status has improved “drastically.”

“She’s rallied,” Ald. Ray Lopez (15th), advocate of humane animal care who works with Chicago’s Animal Care and Control Department, told the Chicago Sun-Times. He added the dehydrated horse was transferred to Forest View Farms in Tinley Park “to be cared for immediately by a vet specializing in equine care.”

“It’s now responding to IV fluids, and its condition has drastically improved since being transferred to the farm,” Lopez said.

“I’m told NuNu is now eating and has had healthy bowel movements and her saddle sores are being addressed,” Lopez said. “The horse’s teeth and hooves were in bad condition; the horse was fitted for horse shoes Friday for added support. It had none during its deadly concrete ride. And, of course, she will get her teeth cleaned.”

While the horse is recuperating better than anticipated, Lopez added that NuNu “should never be ridden again.”

On Thursday, Hollingsworth spoke to reporters after being bailed out of Cook County custody on $25,000 bond. When asked if he would attempt another dangerous publicity stunt with an animal, he responded, “Yes, I’d do it again.”

“I’ve been to jail. I’ve got a background. I’m not perfect. I would rather go to jail for something like (this). That is something worth going to jail for.” Hollingsworth said, according to the Chicago Tribune. “And I didn’t mean no harm on my horse, at all. I’m a horse- (and) animal-loving person. My focus is Kids Lives Matter. And If a person can’t agree with that, I don’t know what to call you.”

Hollingsworth was selected by Chicago Mayor Lori Lightfoot (D) to promote participation in the 2020 census. “Chicago risks losing $1,400 per year for the next decade for each person missed during the census,” WTTW-TV reported.