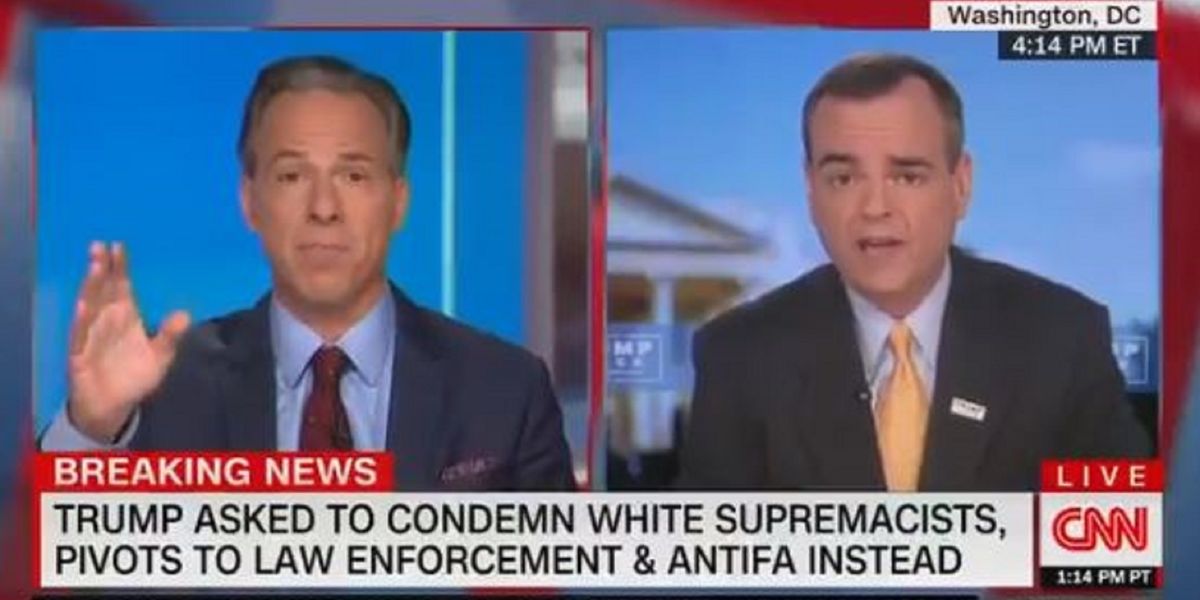 Murtaugh argued that the president has condemned white supremacy many times, including on Wednesday when he clarified his stance. Tapper pushed back against that and eventually pulled the plug altogether when the Trump campaign representative began firing back about Biden’s previous links to segregationists and his recent comments about African American voters.

“Which of these two men is better for the black community?” Murtaugh asked. “The president’s record is clear: lowest unemployment ever for black Americans, historical funding to historically black colleges and universities, the First Step Act — letting people out of prison early for nonviolence offenses, giving them a second chance at life.”

Then, Murtaugh went after Biden.

“Joe Biden, meanwhile, palled around with racist, segregationist senators to prevent reintegration of schools…,” he said.

“Oh, come on!” Tapper replied, repeating, “Come on!” while Murtaugh noted that Biden’s “own running mate [Sen. Kamala Harris (D-Calif.)] took him to task for that during a Democrat debate.”

Murtaugh was referring to Harris attacking Biden on his civil rights record early on during the primaries.

Tapper replied, “If you want to talk about what Joe Biden was doing in the 1970s, when he worked with segregationist senators, absolutely, have at it.”

The host continued to tell Muraugh to “have at it” while the Trump 2020 spokesman moved on to present day.

“Just in this election, [Biden] said that he believes all black people think the same, and he said if you’re not voting for him and you’re black then ‘you ain’t black.'”

With that, Tapper had had enough.

“You know what, I’m not Chris Wallace,” the CNN anchor proclaimed, referring to the Fox News anchor who moderated Tuesday’s debate. Tapper then cut the interview off.

You can watch the exchange in its entirety below. The questions on racial issues begin around the 5-minute mark: