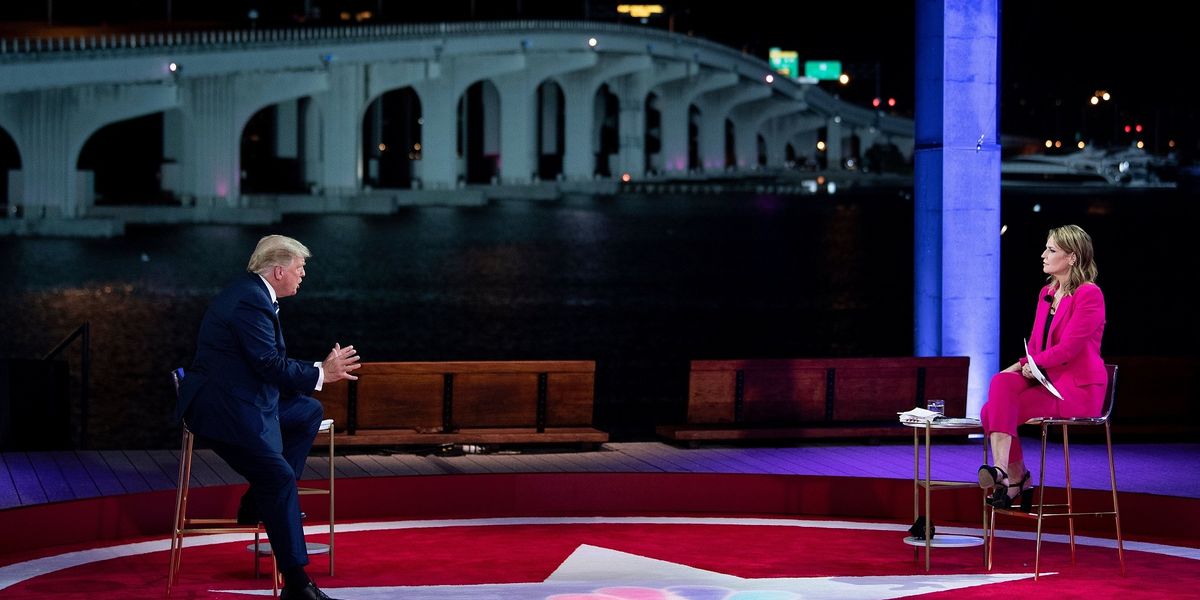 NBC’s Savannah Guthrie received gushing reviews from leftists and scorn from conservatives after being visibly combative toward President Donald Trump during the network’s town hall for the president Thursday night.

The moderator pushed back forcefully against the president’s responses, in stark contrast to the tone set by ABC’s George Stephanopoulos in his dueling town hall for Democratic presidential nominee Joe Biden. Critics accused Guthrie of having a clear agenda against Trump.

Fox News reported that “Viewers who tuned into the Peacock Network expected to hear questions from voters, but similarly to the NBC town hall with Biden, questions for nearly the first 20 minutes of the program came from the moderator.” The outlet noted that, “Guthrie spent much of that time grilling Trump on masks and white supremacy,” and “that didn’t sit well with many.”

Former NYPD Commissioner Bernard Kerik tweeted, “The @DNC propaganda press, I cannot even fake it. @SavannahGuthrie Look like an unhinged as*, and it’s a shame. I thought she was better than that. The good thing for President @realDonaldTrump… Any reasonable viewer could see she was biased, obnoxious and on a mission.”

Air Fleischer, former White House press secretary, wrote, “I just switched to NBC since ABC is in a commercial. Savanah Guthrie has interrupted Trump in these 60 seconds more than Stephanopulos has done to Biden in 40 mins. NBC is an interrogation. ABC is a picnic.”

I just switched to NBC since ABC is in a commercial. Savanah Guthrie has interrupted Trump in these 60 seconds more… https://t.co/g7AFp98fMe

The Hill’s Joe Concha tweeted during the event, “Trump denounces White Supremacy multiple times. Savannah Guthrie follows by accusing Trump of dodging. This is already an absolute joke. And does the audience get to ask questions?” Concha followed up, “Trump denounces white supremacy a good four times. Guthrie: “It sounds like your dodging.”

President Trump’s campaign declared victory after it was all over, with spokesman Tim Murtaugh saying in a statement, “Even though the commission canceled the in-person debate that could have happened tonight, one occurred anyway, and President Trump soundly defeated NBC’s Savannah Guthrie in her role as debate opponent and Joe Biden surrogate.”

NBC had received widespread criticism from Democrats and its own employees for even holding the event and giving air time to President Trump, after he refused to participate in the Commission on Presidential Debates’ proposed “virtual” match-up between him and Biden.

But, according to The Washington Post, Guthrie’s “grilling” of Trump took “the heat off NBC for its town hall.”

Senator Sinema: No, Seriously, I’m Not Getting Rid of the Filibuster
Biden Whines to Reporters: ‘You Never Ask a Positive Question’
Buffalo Bills player Cole Beasley reacts to COVID vaccine backlash, says he’s prepared to quit football: ‘My values are more important to me than a dollar’
Brother of shooting victim blasts ‘defund the police’ movement, pleads for public not to ‘politicize’ victim’s death to push gun control
‘Trillions for Domestic Spending, Not a Cent More for Defense’