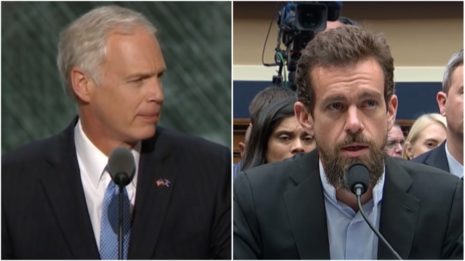 In a hearing about Big Tech censorship, a Republican raked Twitter’s CEO over the coals for daring to suggest that it doesn’t influence American elections.

The hearing’s stated goal, in short, was pitched as to “provide an opportunity to discuss the unintended consequences of Section 230’s liability shield and how best to preserve the internet as a forum for open discourse.” Senator Ron Johnson (R-WI) ensured that the hearing is one Dorsey will never forget.

Johnson wasn’t having it. He directly brought up how Twitter censored the  “New York Post.” He noted that the platform is “withholding, what I believe is true information from the American public?”

This hearing where Johnson made these comments had indeed been launched shortly after recent censorship of a New York Post article across multiple Big Tech platforms. The shocking revelation released by the Post on Oct. 14, cited purported emails from Democratic presidential candidate Joe Biden’s son Hunter and reportedly exposed the alleged scandalous dealings of both father and son in the Russia-bordering state of Ukraine.

Facebook responded by reducing the story’s circulation on its platform, crippling its ability to spread. Twitter responded by disabling the link to the story, claiming: “Warning: this link may be unsafe.” Twitter then censored the Post, the White House Press Secretary Kayleigh McEnany, OANN’s Jack Posobiec, the Trump Campaign, James Woods, Dana Loesch and even the House Judiciary, a part of the government, for sharing this story.

Conservatives are under attack. Contact your representative and demand that Big Tech be held to account to mirror the First Amendment while providing transparency, clarity on “hate speech” and equal footing for conservatives. If you have been censored, contact us at the Media Research Center contact form, and help us hold Big Tech accountable.

White-Collar Privilege is the Worst Kind of Privilege
McAuliffe: Female CEOs Won’t Go to a State That Bans Abortion
ANALYSIS: Food rationing to be announced in America, followed by FOOD RIOTS and social unrest… Biden regime will invoke martial law in 2022
CDC director says the definition of full vaccination could change in the future
National School Boards Association Apologizes for Letter Comparing Parents to Terrorists