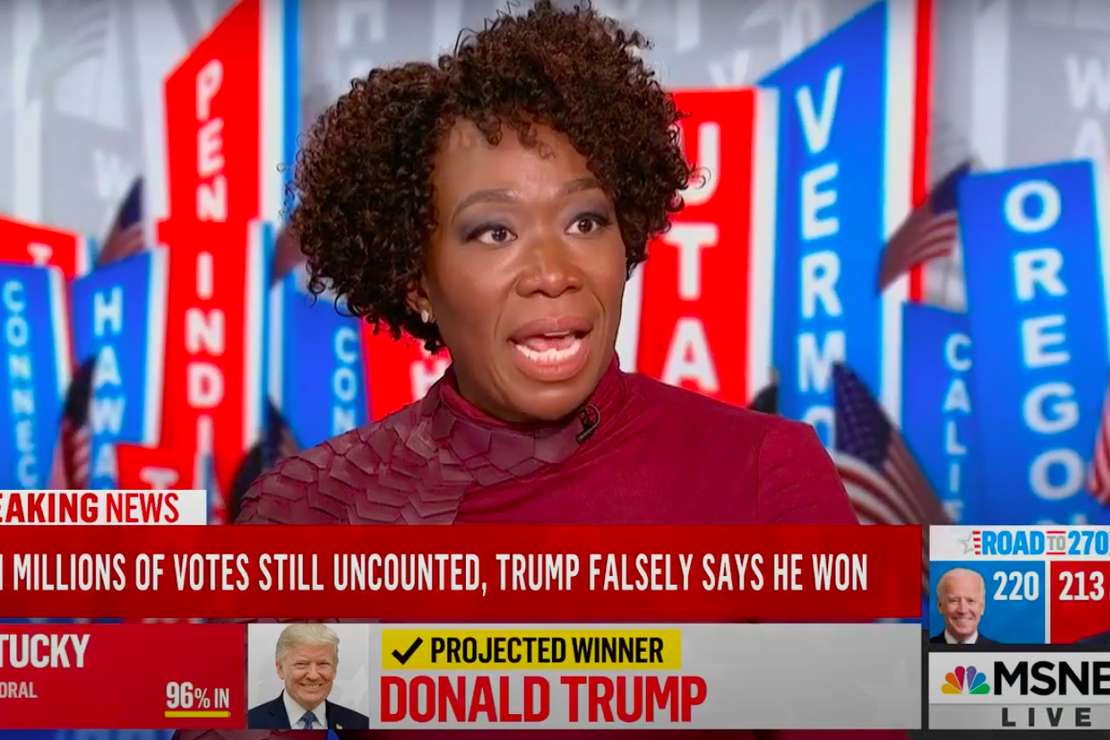 As the results of the 2020 presidential election remained unclear into the wee hours of the morning on Wednesday, MSNBC host Joy Reid speculated about a potential Supreme Court fight over mail-in ballots. She suggested that Supreme Court justices appointed by President Donald Trump would unfairly twist the law to help the president and she even resorted to using a racial slur against the one black justice.

“It’s not exactly clear that we can trust Amy Coney Barrett and [Brett] Kavanaugh and these others not to be just like [Attorney General] Bill Barr,” Reid began, acting as though Barr has twisted his position to Trump’s political benefit.

“I think what scares people is that if he decides to do something that legally makes no sense… If somehow [the Trump campaign’s lawyers] manage to stumble into the Supreme Court, do any of you guys trust Uncle Clarence and Amy Coney Barrett and those guys to actually follow the letter of the law? No,” Reid added.

“It is a completely politicized Supreme Court that you can’t just trust that they’re going to do the right thing,” she insisted. Then, almost as an afterthought, she admitted that her fearmongering has little basis in fact: “Now, so far, the courts have actually been pretty good.”

Democrats and left-leaning commentators have often vociferously opposed Clarence Thomas, one of the more outspoken originalist justices on the Supreme Court. Yet few have resorted to using outright racial slurs against him.

While Reid did not specifically call Clarence Thomas an “Uncle Tom,” her language implied the slur and she used a demeaning tone of voice to refer to Thomas and Barrett.

The “Uncle Tom” slur derives from Harriet Beecher Stowe’s novel Uncle Tom’s Cabin and it is a derogatory term for a black man considered a traitor to his race by being too deferential to whites who take advantage of him.

Reid also used the “Uncle Clarence” slur in multiple tweets on election night. In one tweet, she mocked four originalist justices, using the Uncle Tom slur and calling Samuel Alito “Scalito,” Barrett “Amy Covid,” and Kavanaugh “Beer Man.” In another, she demonized Thomas as a “hardcore theocratic ideologue” and an opponent of “voting rights and democracy.”

When President Trump complained about the concocted Trump-Russia smear to destroy his reputation and presidency, the legacy media accused him of “undermining faith in America’s institutions.” Now, Democrats are openly scheming to pack the Supreme Court and some have even resorted to racial slurs in order to blackmail the Supreme Court into presumptively favoring Joe Biden in any potential litigation.

Will Trump Win, and How Soon Will We Know? These 6 States Will Give Clues to the Answer.