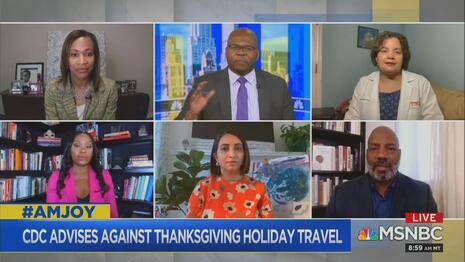 In these coronavirus times, it’s one thing to encourage people not to gather in large groups for Thanksgiving. But for such purposes, is it necessary to trash the most beloved holiday in America’s secular calendar?

Yes, apparently—if you had the misfortune of tuning into MSNBC’s AM Joy this morning. Guest host Jason Johnson tipped off the trashing of Thanksgiving by saying:

“I know in my family, I know several people who call it “Colonizer Christmas,” because they don’t really like the idea of what Thanksgiving represents.”

Not to be outdone, Jelani Cobb of the New Yorker, who’s also an MSNBC contributor, associated a ghoulish image with the holiday. He said that “anthropological research” indicates that at the time of the original Thanksgiving, the colonists resorted to “cannibalism” because of their dire conditions. Something to think about as you chow down on that turkey leg!

Note: there is some evidence of isolated incidents of cannibalism among the Jamestown colonists during the harsh winter of 1609-10. But this was hardly a widespread practice. Cobb’s attempt to associate Thanksgiving with cannibalism was grotesque.

MSNBC’s War on Thanksgiving was sponsored in part by Oscar Meyer, Gold Bond, and USPS. Contact them at the Conservatives Fight Back links to let them know what you think of MSNBC’s revolting attack on Thanksgiving.

JASON JOHNSON: As coronavirus surges out of control in nearly every single corner of the country. It looks like spaghetti has been spread all over the US map. This morning the number of cases in the US has topped 12 million. The CDC is pleading with people to not travel for the Thanksgiving holiday. But, 40% plan of Americans plan to attend a Thanksgiving dinner with ten people or more, potentially creating super-spreader events all over the country. So with just days to go before  America’s favorite holiday, I’m urging you not to be the turkey who puts your loved ones at risk.

Jelani, I want to point this out. Thanksgiving has evolved in America, just like Christmas, right? At one point, Christmas was a time for rich people to open up their houses for people to come in and get stuff.

Thanksgiving has changed over time as well. I know in my family, I know several people who call it “Colonizer Christmas,” because they don’t really like the idea of what Thanksgiving represents.

From a cultural and a historic standpoint, is it really that much a disruption that we should maybeo back off of Thanksgiving this year? Haven’t we had other times where major holidays had to change because the nation was facing crisis?

JELANI COBB: Sure. Or even think about it: that original Thanksgiving, you know, where the colony was starving, and, you know, anthropological research suggests was in such dire conditions they had to resort to cannibalism to remain alive.

And you know, it always has been kind of awkward to say that you commemorate that by stuffing yourself with as much food as you can find. And maybe, perhaps, people have to actually think about a small sacrifice that would be fitting, in keeping with this day.