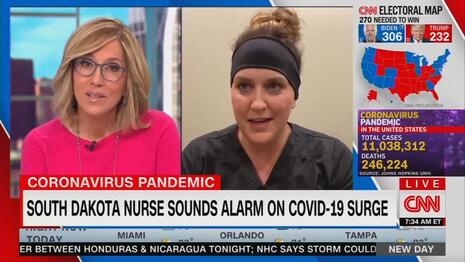 In the latest blow to CNN’s claim to be a news organization, National Review and Wired found last week that their much-heralded November 16 interview with South Dakota nurse Jodi Doering, who was trashing her patients, had more than a few holes.

While Doering’s story drew widespread attention by over a half dozen CNNers, National Review and Wired couldn’t find anyone to confirm Doering’s claims of coronavirus patients “who still don’t believe the virus is real” and that it’s instead a conspiracy theory.

According to a Nexis search of CNN-U.S. shows, CNN dedicated 23 minutes and 38 seconds between November 16 and 18 to Doering’s tale of, in the words of weekday afternoon CNN Newsroom host Brianna Keilar,  “doctors and nurses…battling conspiracy theories along with the virus.”

Of course, CNN has yet to air an acknowledgment or correction because, when there’s a narrative to push, CNN subscribes to the mantra of if it rings true, it is true.

There’s no doubt that we owe a deep debt of gratitude to Jodi Doering and all the frontline medical personnel dealing with the current surge in Covid cases. The work they do is truly heroic. Still, the manner in which Doering’s account of her experience has been reported and circulated should give people pause.

Doering’s statement that she’s watched “so many” people die from the disease even as they deny its very existence, endlessly repeated on social media and presented by news outlets without corroboration, would seem to represent a broader phenomenon.

But other nurses who work in similar settings say they’ve seen nothing of the kind.

I called a number of hospitals in the same part of South Dakota to ask emergency room nurses if they’d noticed the same, disturbing phenomenon. At Avera Weskota Memorial Hospital, about 20 minutes from Doering’s hometown of Woonsocket, an ER nurse told me, “I have not had that experience here.” At my request, Kim Rieger, the VP for communications and marketing at Huron Regional Medical Center, one of the four medical facilities where Doering works, spoke with several nurses at Huron to get their reactions to the CNN interview. None said they’d interacted with Covid patients who denied having the disease. “Most patients are grateful, and thankful for our help,” one told her. “I have not experienced this, nor have I been told of this experience, ever,” another said.

Writing for National Review, Ryan Mills spoke with two spokespersons for hospital conglomerates operating in South Dakota and neither could corroborate Doering’s assertions that some patients were delusional due to their political inclinations.

Doering’s viral tweets warranted zero fact-checking from CNN, so she was then catapulted into an eight-minute-plus interview on the November 16 New Day with co-host Alisyn Camerota boasting: “When I read some of your tweets, my jaw dropped.”

Camerota sat in awe, lobbing one softball after the next. Here were some highlights of claims Doering (click “expand”):

I think the hardest thing to watch is that people are still looking for something else and they want a magic answer and they don’t want to believe that COVID is real. And the reason I tweeted what I did is it isn’t one particular patient. It’s just a culmination of so many people, and their last, dying words are this can’t be happening. It’s not real. And when they should be spending time face timing their families they’re filled with anger and hatred, and it just made me really sad the other night. And I just can’t believe that those are going to be their last thoughts and words.

I think it’s frustrating as a healthcare provider because the last thing that we ask anyone when they seek care is how they voted or if they’re a Democrat or Republican. The last thing we ever think about is that. What we think about is how can I help you? And so, anybody that uses any chance to make this political makes any healthcare provider want to scream because at the end of the day we just want to help, and if we don’t get some help from the public as far as mask wearing and social distancing, you know, there’s a thing on the internet right now that says I’m not your first line of defense. I’m your last, and that actually is true in South Dakota that by the time you get to me and the team that we work with it might be too late for some, and that is heartbreaking because the reality is we’re a small state.

“Thank you for all the you do for your patients even when they scream at you, and we just — we just really appreciate you and that you go back in every day and do that all over again,” Camerota then concluded.

CNN then used clips from Doering’s interview throughout the day, appearing on CNN Newsroom editions helmed by Kate Bolduan and Keilar.

The Lead’s Jake Tapper also participated in spreading this lie, both in a clip from correspondent Nick Watt (which also ran on The Situation Room with Wolf Blitzer) and then in a remark to chief medical correspondent Dr. Sanja Gupta:

And we heard from that nurse from South Dakota earlier today on CNN, talking about the denial that patients are in. They’re dying of COVID, and they still won’t accept that fact, because they have been lied to by figures in the media and politics who have been denying that this crisis is as serious as it is.

CNN Tonight host Don Lemon dedicated just over four minutes to Doering’s story and asked a panel of three medical experts whether they had experienced anything remotely similar. None of them said they had COVID patients angrily denying their illness, but that skepticism didn’t stop Lemon from treating the narrative as fact. 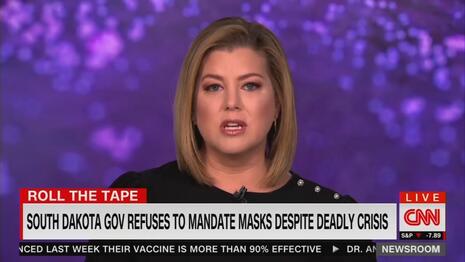 The ever-smug John Avlon ironically used Doering’s hate-filled tall tale on November 18’s New Day for his “Reality Check,” declaring that “[t]he tragedy’s compounded by” some “deadly” “disinformation” as “some people who are being hospitalized still are in denial about COVID, because they bought into President Trump’s bluster.”

Writing in his “Fourth Watch” newsletter, our friend Steve Krakauer summed up Doering’s behavior as “generally gross” as she “[chose] to go on national TV and share the private dying words of her patients” and even “laughed her way through the interview.”

Krakauer added that this story symbolized “a combination of two things that caused this journalistic malpractice – a reliance on Twitter, combined with a passive attack on Trump that ends up being too good to check by CNN and other outlets.”

Here We Go: Trump Declassifies ‘Crossfire Hurricane’ Docs on His Way Out the Door
The Quiet Part in Biden’s Address
Dissent, Patriotism, and Insurrection: A Complicated History
The Right-Wing Outlets That Told Trump Fans What They Wanted to Hear
Republican Fundraising and the Case of the Missing Trump