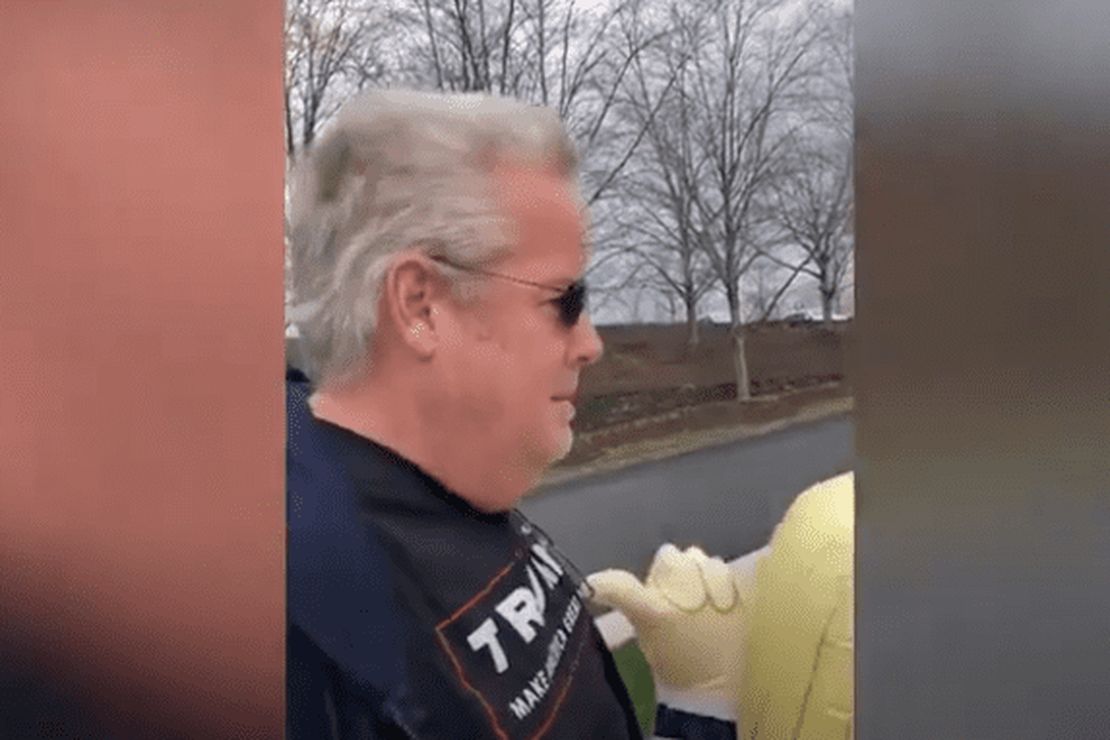 They told me that if Joe Biden won the election,* Trump supporters would start getting arrested just for breathing. And they were right!

A man accused of breathing on anti-Trump protesters outside the president’s golf club in Sterling, Virginia, was charged with misdemeanor assault.

Kathy Beynette told News4 that she and another woman were protesting President Trump outside the Trump National Golf Club on Saturday. Across the street, a group of Trump supporters were counter protesting…

In the video, a woman can be heard telling him, “You’re in my face and you don’t have a mask, so you need to back off.” The man then takes a deep breath and blows.

“He just proceeded to assault us by taking a deep breath and doing a very powerful exhalation on both of us,” Beynette said.

Oh no, not that! Witness this horrible crime for yourself:

Both things are true. He shouldn’t run around blowing on people, pandemic or not. And those women shouldn’t have been there in the first place if they actually believe they’re now in danger. Yes, they had the right to be there, and I have the right to point out that they’re at least as stupid as the guy who “assaulted” them.

What were any of them doing there in the first place? What were they accomplishing? What was gained? The rest of us aren’t supposed to have Thanksgiving this year, but these intellectual giants get to run around protesting a golf course?

(Although one nice thing about having a Democrat back in the White House is that playing golf won’t be evil anymore.)

My favorite part of this story is that these two hens are now complaining that they had to cancel their Thanksgiving plans. Well then, they should’ve stayed home. Staying home really cuts down on the chances of complete strangers walking up and breathing on you.

Everything about this story makes me even more depressed about the state of America and all mankind. I get that everybody’s exhausted and nobody knows what to do. Nobody’s thinking straight, assuming they were able to think straight before they’d ever heard of COVID-19. But I just wish everybody would calm down and stop being idiots. Is that really too much to ask?

Mind you, I’m not calling for anybody to be locked up just for, say, holding a Thanksgiving dinner with more than some arbitrary number of people. I’m not a fascist like Oregon Governor Kate Brown, who wants you to squeal on your neighbors for being too festive. And this is after months of rioting in Portland and other Oregon cities. You can smash store windows every single night, and Oregon jails have revolving doors. They’ll let you out again and again. But if you cook a turkey and invite people over, then you’re really in trouble.

Or at least until we defund the police.

*I mean, Biden won. There were only two possibilities, and that’s one of them. One candidate has to win and the other one has to lose. That’s how it works. You don’t have to like it, and you can come up with as many conspiracy theories as you want, but it’s over. Sorry to spoil the pity party.