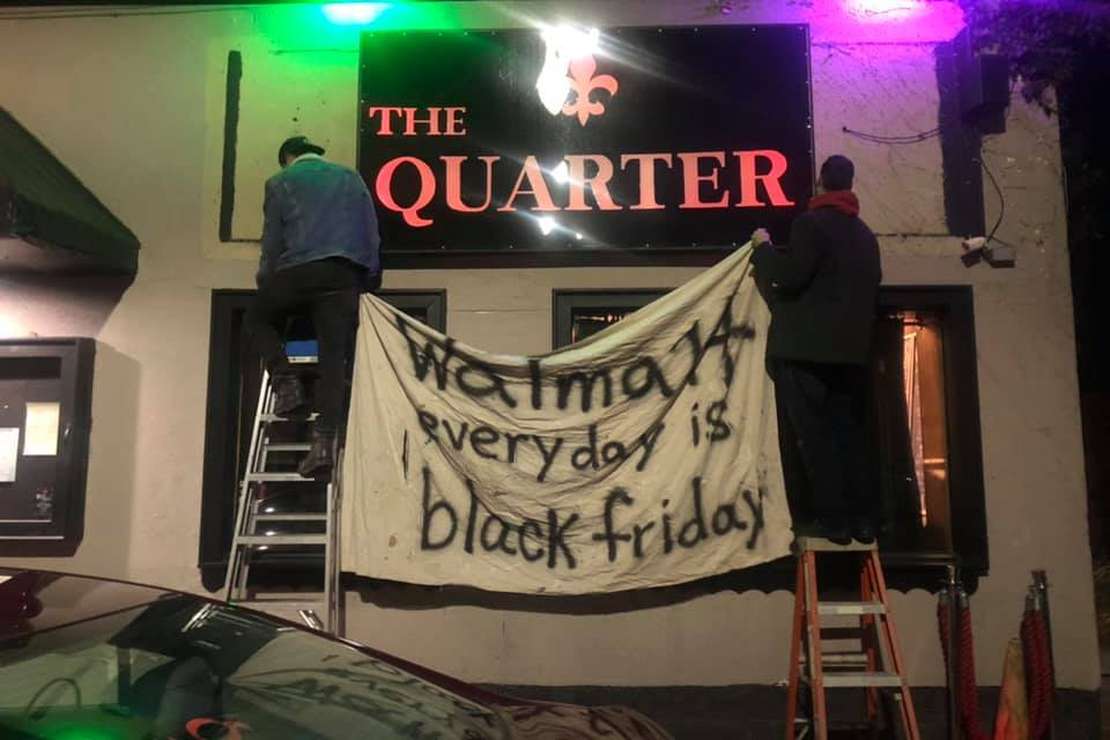 The Quarter, a New Orleans-inspired restaurant in Buffalo’s Allentown district, put up a sign calling itself “Walmart” in protest of  Governor Andrew Cuomo’s latest lockdown restrictions. Due to a rise in COVID-19 cases, most of Erie County, N.Y., has been designated an “orange zone,” requiring certain establishments, like gyms, to remain close, while restaurants are restricted to take-out dining only.

The sign that was posted by Brandon Carr, the owner of The Quarter, read: Walmart: every day is black friday.

“We put up this ‘Walmart’ sign over our restaurant sign as a demonstration of how we keep being told to ‘follow the science,’ yet common sense by the politicians has been completely ignored,” Carr told PJ Media. “On Black Friday, thousands of people were crammed inside stores, nobody there to enforce social distancing or masks, toys being touched on the shelves and then put back ready for the next person to touch without washing hands, all the while small businesses and restaurants are being decimated when we are following the rules.”

Restaurants had been requiring diners to remain masked unless seated, and tables were kept six apart. According to Carr, the lockdown rules implemented by Governor Cuomo are not fair to small businesses, who risk getting hefty fines for violating arbitrary rules that favor big businesses.

“Will the big businesses get fines? Most likely not. Yet, Athletes Unleashed held a protest at their gym after hours with 50 people and received a $15,000 fine,” Carr said in reference to the Buffalo-area gym that stood up to the local health department that attempted to shut down a meeting of local business owners planning how to survive the latest shutdown of “non-essential” businesses. Video of the confrontation went viral, and the owner of the gym, Robby Dinero, was issued a $15,000 fine, which he ripped up.

Carr has experienced similar harassment from local authorities and expects it to continue. “I’m sure this sign will most likely trigger the sheriffs, state liquor authority, and health department to come in unannounced to check on us,” he said. “But they’ve done that four times in the last nine days anyway, so it’s nothing new.”

Governor Cuomo has demonstrated a pattern of targeting businesses that disagree with his policies.

In the summer, Abby Ehmann, the owner of East Village dive bar Lucky, had her liquor license suspended a week after starting a petition calling for Governor Andrew Cuomo to reverse New York’s mandate requiring that a substantial amount of food be served with any alcohol purchase. In July, the Village Line, a bar in Kenmore, mocked Governor Cuomo’s mandates with a satirical menu called “NYS Safe Menu” that spelled out an obscenity and Cuomo’s name in its list of food offerings to comply with the mandate. The menu went viral and the bar’s liquor license was suspended over social distancing violations the bar says never happened. In August, the Arrowhead Golf Club in Akron, N.Y., had its liquor license revoked after suing New York State.

Unfortunately, small business owners are once again suffering under the arbitrary regulations imposed by Governor Cuomo that seem to have no basis in science. While restaurants are forced to do take-out dining and delivery, big chain stores like Walmart and Target are able to remain completely open with shoppers wearing masks, even though, as Carr notes, they could do curbside pickup or delivery just like restaurants.

Carr told PJ Media that he isn’t disparaging big businesses because they are allowed to operate fully. “Cuomo and others are denying us our constitutional rights while politicizing this virus, and collecting their big state sales tax on Black Friday,” Carr explained. “If big business did what they did, then I should be able to put fifty people in my restaurant safely following the CDC guidelines.”

One thing is certain: the lockdowns imposed by Andrew Cuomo and other governors have taken a huge toll on small businesses, and have destroyed the livelihoods of many people, all for a disease with a recovery rate of 99.997% for people 19 years old and younger, 99.98% for people 20 to 49 years of age, 99.5% for those between the ages of 50 and 69. The lowest recovery rate is for those 70 and older, and it’s 94.6%. For most people, the risk posed by COVID-19 is incredibly small, and the costs of these haphazardly imposed lockdowns might actually prove to be far greater.

Matt Margolis is the author of Airborne: How The Liberal Media Weaponized The Coronavirus Against Donald Trump and the bestselling book The Worst President in History: The Legacy of Barack Obama. You can follow Matt on Twitter @MattMargolis

Cuomo’s Cover Up of His Deadly Nursing Home Policy Explained

Cuomo Claims His COVID-19 Response Worked and ‘Was Beautiful’

Doocy Stuffs Psaki’s Gobbles Over Biden in Nantucket, Rittenhouse, Thanksgiving
The Kruiser Kabana Episode 160: A List of ‘Conservatives’ We Don’t Need To Talk About Anymore
Brown University’s Anti-Zionist Fantasy World
The New COVID-19 Scariant Distracts From Questions We Should Be Asking About Vaccines
The Legacy of Reverend Robert Sirico