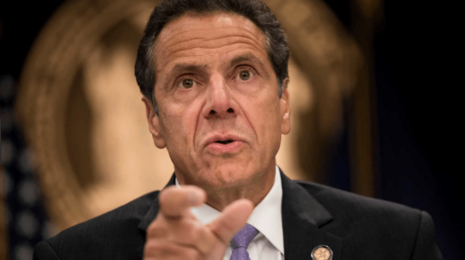 They say that familiarity breeds contempt and sometimes it even breeds hilarious contempt as seems to be the case of Alexis Grenell, a former aide of Andrew Cuomo. She wrote a highly entertaining takedown of the New York Governor for the radical magazine The Nation over the Emmy Award  for his COVID-19 performances in front of the camera.  Almost everything about Grenell’s Wednesday article is just downright funny starting with the title, “The Collapse of the Cuomosexual.”

If the title makes you chuckle, you will probably burst out laughing over the subtitle just below it: “St. Andrew of Covid, our savior of the spring, is now milking his 15 minutes of fame for an extra 30.” As for the body of the article itself, you don’t have to wait long for the delicious takedowns of the thin-skinned governor.

The Andrew Cuomo New Yorkers know and mostly tolerate, the snarling attack dog who gaslights fellow Democrats and deploys staff to call his female critics “f***ing idiots,” dropped down to Earth last week. It was a hard landing after a long-distance love affair with a fanbase in a galaxy far, far away.

In the middle of one of his now Emmy Award–winning (apparently for using “television to inform and calm people around the world”) Red Room press conferences, the governor blew a gasket. The trouble started when Jimmy Vielkind from The Wall Street Journal asked the obvious question that every New York City public school parent wanted to know: Will schools be open tomorrow? Cuomo’s months (years, really) of pissing all over Mayor Bill de Blasio have naturally caused confusion over who owns this loser of a decision, compounded by the fact that the city (3 percent) and state’s (2.5 percent) data on infection rates don’t align. So rather than give a straight answer, the self-described “cool dude in a loose mood,” threw a Trump-style tantrum.

Okay, since this was published in The Nation, you can expect antipathy towards Trump but the very liberalism of the magazine makes it almost impossible for poor Cuomo to just brush it off as some sort of political grudge against him. A couple of examples of Cuomo trying to brush off criticism is provided by Grenell:

Cuomo undeniably offered a vision of competent, humane government at the height of the crisis, but this is who he is the rest of the time. It’s why he and his staff reflexively insult anyone who criticizes his handling of the pandemic or insists on returning to the normal system of democratic governance as Jefferson envisioned it. People like the relentlessly honest Bill Hammond from the Empire Center for Public Policy, who’s currently suing the administration to force it to disclose the real number of Covid-related nursing home deaths (“yet another publicity stunt from an arm of the far-right advocacy industrial complex”). Or Assembly member Ron Kim for suggesting that the governor acted against the public interest in letting his state be one of the two that grant hospitals and nursing homes broad corporate immunity (“politically motivated”).

To fully appreciate the artistry of Grenell’s comic takedown of poor Cuomo, you need to read the entire article but here are a few highlights that will tickle the funny bone:

The whole show ended with Cuomo standing behind the dais shouting at the entire room, “New Yorkers are doing a great job, and don’t demean them. It’s disrespectful to New Yorkers!”

Or maybe just the one?

…It all boils down to this: Any dissent is a partisan attack on our very lives, and Andrew Cuomo is our only hope. To solidify the narrative, he’s even written a self-congratulatory book at what he calls “half-time” in the crisis. Kind of like how every coach puts out a press release mid-game and Winston Churchill wrote the history of World War II in 1943. Oh, wait…

Exit Question: Should Alexis Grenell write a comedy show about her experiences as an aide for Andrew Cuomo? Oh, wait; which Hollywood studio would ever mock a real-life liberal Democrat?