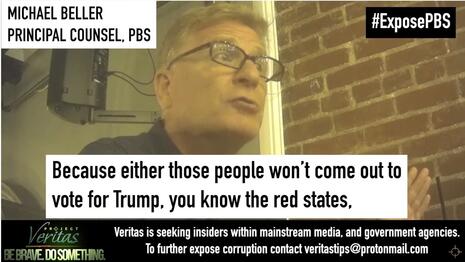 In 2011, Project Veritas exposed the leftist snobbery of National Public Radio when two men posing as Muslim activists went to lunch with NPR fundraisers Ron Schiller and Betsy Liley, and Schiller ruined his own NPR career by popping off on hidden camera about how Tea Party advocates were “white, middle-America gun-toting…seriously racist, racist people.”

As they discussed the Middle East and Muslims, Schiller added “I am most disturbed and disappointed by in this country, which is that the educated, so-called elite in this country is too small a percentage of the population so that you have this very large uneducated part of the population that carries these ideas.” He probably was let go for saying NPR didn’t need federal funding. There is no question many conservative taxpayers are outraged people like this are taking our tax dollars.

Beller was snookered into offering his real opinions,  that he was happy to live in Washington D.C. instead of a small town in the United States. He said that people in those towns are not intelligent. “Americans are so f*cking dumb. You know, most people are dumb. It’s good to live in a place where people are educated and know stuff. Could you imagine if you lived in one of these other towns or cities where everybody’s just stupid?”

Let’s play this during a PBS pledge drive in the red states.

“PBS — Supported by dumb f–king Americans like you. Thank you.”

Also gross: Beller expressing delight that the coronavirus was cresting in red states:

BELLER: What’s great is that COVID is spiking in all the red states right now. So that’s great.

VERITAS: Why do you think so?

BELLER: Because either those people won’t come out to vote for Trump — you know the red states — or a lot of them are sick and dying.

Beller was also goaded into joking about how the children of Trump-supporting parents should really enter PBS re-education camps.

“They’ll [Trump supporters] be raising a generation of intolerant, horrible people – horrible kids,” Beller said. “We go for all the Republican voters and Homeland Security will take their children away…we’ll put them into the re-education camps,” he cracked.  “Enlightenment camps. They’re nice, they have Sesame Street characters in the classrooms, and they watch PBS all day,” he said.

The Veritas team led with Beller’s attempt at humor if all those “f—ing dumb” Americans re-elected Trump.

BELLER: In these times, which are unique — I mean Trump — Trump is close to Hitler.

VERITAS: What are you going to do if we [Democrats] don’t win?

BELLER: Go to the White House and throw Molotov cocktails.