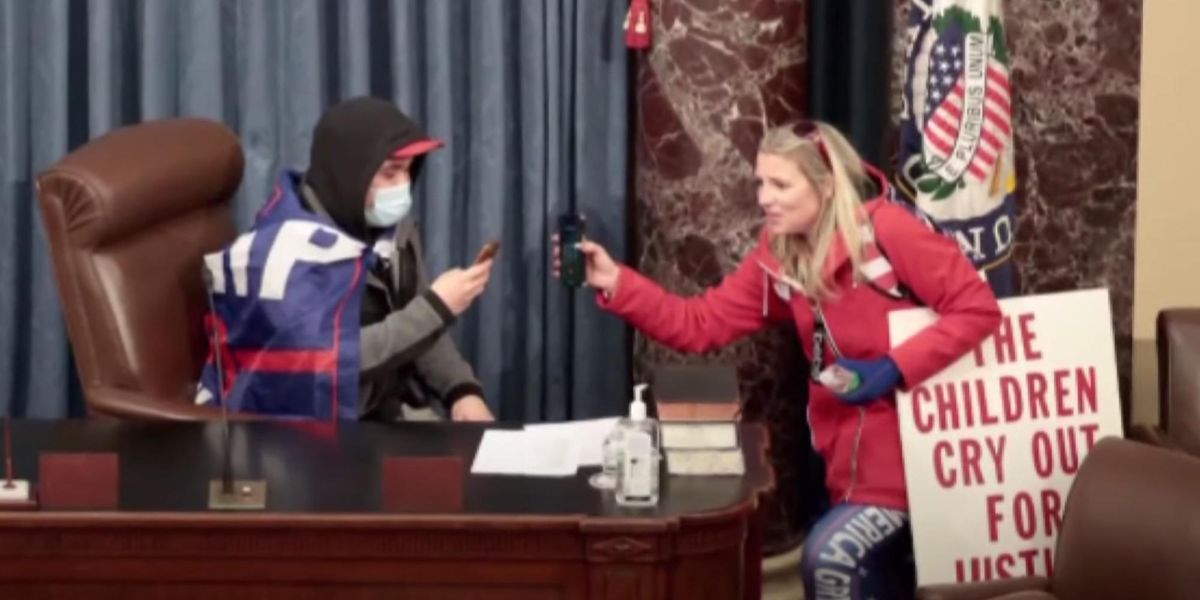 A woman who was arrested for her alleged involvement at the U.S. Capitol riots had worked as a school therapist at the Cleveland Metropolitan School District before she quit in order to pursue her mission to expose pedophilia rings in local government.

The FBI searched Christine Priola’s home in Willoughby, Ohio, on Friday based on a tip from a Twitter account who identified her through images posted by the FBI from the Capitol rioting, according to WKYC-TV.

The photos showed a woman taking a photograph or video of a man sitting in the chair of Vice President Mike Pence in the House of Representatives after it was seized by rioters.

The woman held a sign that read, “The children cry out for justice.”

The FBI confiscated computers and her phone and discovered that photos, videos and messages had been wiped from the devices from around the time of the Capitol rioting.

WKYC documented a resignation letter from Priola submitted the day after the Capitol riot.

“I will not be taking the corona virus 19 vaccine in order to return to in person learning,” said Priola in the letter to school officials.

“I will be switching paths to expose the global evil of human trafficking and pedophilia, including in our government and children’s service agencies,” she added.

“I do not agree with my union dues which help fund people and groups that support the killing of unborn children,” Priola wrote.

Priola was taken into custody by the FBI at her home on Thursday morning. She was charged with knowingly entering or remaining in a restricted building, violent entry and disorderly conduct on Capitol grounds, and unlawful activities on Capitol grounds.

She appeared before the federal court in downtown Cleveland and was released on an unsecured $20,000 bond. Priola faces up to two years in prison and fines if found guilty.

Here’s the video report from WKYC:

Antifa thugs attack women protesting potential placement of murderous transsexual in women’s prison: ‘These are the kind of men we want to keep out of the prison’
Mike Pence Praises Elon Musk’s Plan To Release Censorship Files
New York Times FINALLY Arrives on Biden-Spike ‘Twitter Files’ on Monday’s Page B-5
One dead, others injured after ‘rogue wave’ strikes Viking Polaris ship
Florida doctor accused of raping patients during cosmetic operations found dead in a ditch with a gunshot wound to his head