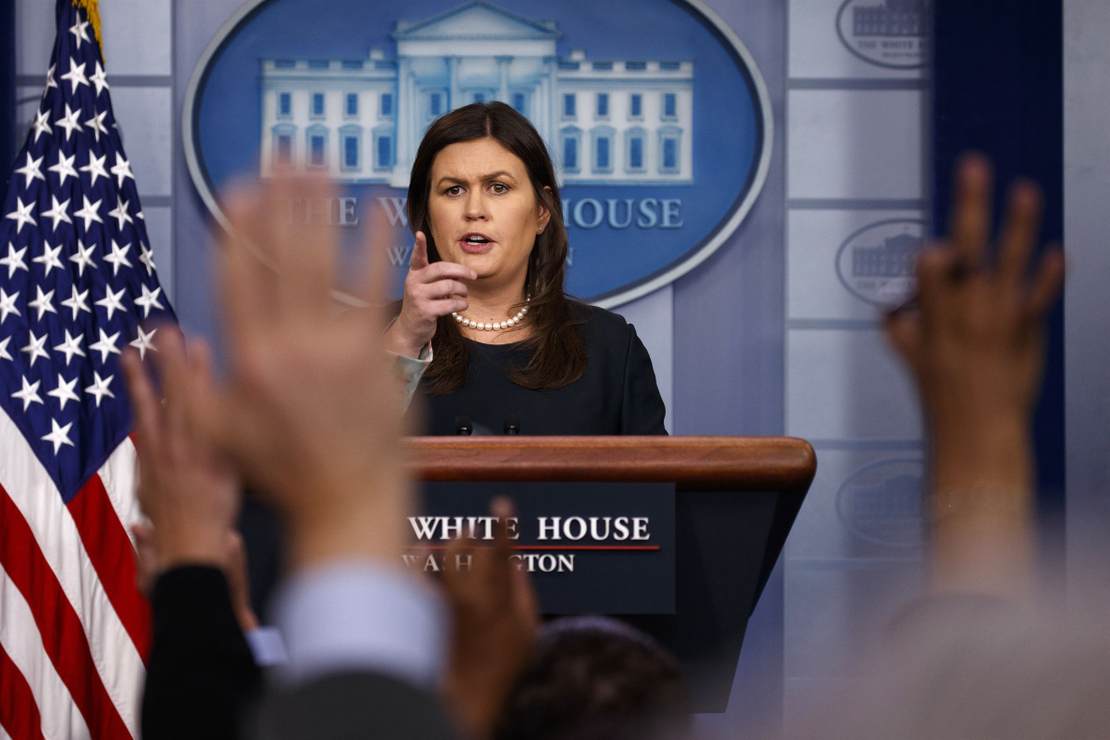 Sarah Huckabee Sanders, President Donald Trump’s former White House press secretary, announced her 2022 candidacy for governor of Arkansas on Monday. In an 8-minute video, Sanders condemned political violence on both the Left and the Right, called for law and order, praised her home state, and laid out a conservative agenda. She also briefly featured her father, former Arkansas Governor Mike Huckabee, in the video.

“Everything we love about America is at stake. And with the radical Left now in control of Washington, your governor is your last line of defense. In fact, your governor must be on the front line. So today, I announce my candidacy as governor of Arkansas,” Sanders declared.

“As governor, I will defend your right to be free of socialism and tyranny, your Second Amendment right to keep your family safe, and your freedom of speech and religious liberty,” she promised.

Sanders began the video with an anecdote about a soldier at Trump’s surprise Christmas trip to Iraq in 2018. While she spoke to the troops, one American soldier praised her for her work explaining Trump’s administration in the face of an extremely hostile legacy media. She returned the praise, and he tore off his “Brave Rifles” patch from his arm and handed it to her.

Sanders addressed political violence early in the video, acknowledging the Capitol riot at the end of Trump’s presidency without mentioning Trump’s tumultuous challenge to the 2020 election results. She mentioned the Black Lives Matter and antifa riots and the Congressional baseball game shooting in 2017 as other horrific examples of political violence.

“America is great because we are free but today our freedom and the rule of law are under attack,” Sanders warned. “I was the first White House press secretary to require Secret Service protection because of a credible violent threat against me. We’ve seen violence in our streets, at a Congressional baseball practice, and at our Capitol.”

“This is not who we are as Americans. To remain free, we must have law and order and resolve our differences peacefully,” the candidate declared. “The radical Left’s solution is to impose government control and censorship from the top-down. But their socialism and cancel culture will not heal America, it will only further divide and destroy us.”

In running for governor, Sanders joins a crowded Republican primary. Lt. Gov. Tim Griffin (R-Ark.) and Attorney General Leslie Rutledge (R-Ark.) have also thrown their hats in the ring to replace current Gov. Asa Hutchinson (R-Ark.), who is unable to run in 2022 due to term limits. No Democrats have yet announced a run for the seat.

Sanders headed off potential criticisms from her statewide rivals by featuring her father and emphasizing her ties to Arkansas.

“My dad always said the real test of a leader is not the way you handle the issues you know are coming, it’s rising to the moment in a crisis you could never plan for. I’ve been tested under fire, successfully managing one crisis after another, in one of the most difficult, high-pressure jobs in all of government,” she said, referencing her work as White House press secretary.

“Arkansas is the land of opportunity, where Sam Walton grew a little five-and-dime store into the most successful business on the face of the earth,” she went on, referencing Walmart. She mentioned Arkansas legends like Al Green and Johnny Cash, and the Little Rock Nine, a group of black students who enrolled at a previously all-white school in 1957, a turning point in the Civil Rights movement.

“I love my state and care about my people,” Sanders added. He mentioned that at the beginning of the COVID-19 pandemic, she and her husband Brian “launched the Arkansas 30-day fund, to raise money from the private sector to help small businesses in every corner of Arkansas keep their doors open and save jobs.”

“I was only the third woman, and the first mom, to serve as white. house press secretary. And with your help, I hope to be the first woman to lead our state as governor,” Sanders said.

She laid out a Trump-style governing agenda: prohibiting sanctuary cities; fighting “the radical environmental policies, like the green new deal, that threaten to destroy so many jobs;” reducing the size and cost of government; decreasing Arkansas’ state income tax; championing school choice; and reforming welfare to “incentivize work and unleash hope for a better future.”

Sanders’s announcement video suggested she would make a formidable candidate for governor in the state.

“I took on the media, the radical Left, and their cancel culture, and I won,” she boasted.

Yet perhaps her strongest moment came toward the end of the video when she mentioned her Christian faith as the key to combatting the Left’s destructive narrative about her.

“As white house press secretary, I never had to worry about the far-Left and their allies at CNN or the New York Times defining me, because I have a Creator who’s already done that,” Sanders said. She identified herself as “a Christian, a wife, a mom, a proud Arkansan.”

Sanders faced an extremely difficult challenge in defending Trump against the legacy media. Many of Trump’s policies proved excellent, but his blustery statements often distracted from his positive achievements. The legacy media seized on every opportunity to demonize him.

Democrats and the legacy media also attacked Sanders personally. CNN White House Correspondent April Ryan called for Trump to fire Sanders in 2019, going on to say that someone has to “start lopping the heads off” of Trump’s staff. “Comedian” Michelle Wolf demonized Sanders as “Uncle Tom but for white women who disappoint other white women.” When the owner of the Red Hen in Lexington, Va., asked Sanders to leave his restaurant, she tweeted about the incident. Rep. Barbara Lee (D-Calif.) and former Director of the Office of Government Ethics Walter Shaub denounced the tweet as an attack on the restaurant and therefore a violation of government ethics.

Sanders deftly dodged these attacks while championing Trump’s policies. In fact, she baked pies for the press, specifically for April Ryan.

Sanders left the White House in 2019 to return to her home state.

Anatomy of a Smear: How the Media Created a Malicious Lie About Trump’s ‘Animals’ Comment

Sarah Huckabee Sanders on Red Hen Tweet: Just Another Response to ‘News of the Day’

Why Michelle Wolf’s Worst Attack Was Worse Than You Think

The All-Out Assault on Conservative Thought Has Just Begun