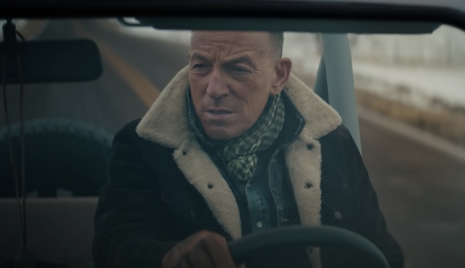 Melodramatic and patronizing corporate TV ads are as big a part of the Super Bowl as a Tom Brady appearance, though New Jersey music legend Bruce Springsteen’s obnoxious Jeep ad about the “ReUnited of America” took patronizing to a whole new level.

Considering “The Boss” has been slamming Trump and his supporters (which he has called “bums” and a “fucking nightmare”) for the better part of five years, his 2021 Jeep Super Bowl ad seemed less an appeal to unity, than a call for Trumpers to get on with Democrats’ far left ambitions for their country.

The ad, produced by Jeep and starring the “Born to Run” singer, made a heavy appeal for Americans to find common ground with one another after a contentious Donald Trump presidency. The setting of the ad was a chapel in Lebanon, Kansas, the exact geographical middle of the United States of America. The singer elaborated on the obvious metaphor with soulful and somber words: “All are more than welcome to come meet here in the middle. It’s no secret the middle has been a hard place to get to lately, between red and blue, between servant and citizen, between our freedom and our fear.”

At the end of the ad, the words “To the ReUnited States of America” flashed on screen. Oh, back to normal, is it?

Of course, millions of conservatives have seen opportunistic Democrat politicians lie to them for years about Russian collusion, the first impeachment of Donald Trump (and his second). They’ve seen Dems endorse the Black Lives Matter protests which led to $2 billion worth of property damage and dozens of murders and the same conservatives have had the pleasure of being called deplorables, racists and rubes every step of the way.

Springsteen, a proud Dem, has done his fair share of demonizing these conservatives by going after their presidential candidate. Springsteen blistered Trump a few months before the 2020 election. In an interview with Atlantic, Springsteen called Trump a “threat to democracy,” adding that the then-president was standing in the way of “any kind of reform” that could stem from the Black Lives Matter protests, which were raging at the time.

“I don’t know if our democracy could stand another four years of his custodianship. These are all existential threats to our democracy and our American way of life,” he added in that interview. Of course that means the 74 million who voted for Trump are that threat. Oh but the movement that led to the horrible riots of last summer. That’s just necessary reform.

In an episode of his podcast, produced only a week before the 2020 election, Springsteen also  called the Trump administration a “fucking nightmare,” and complained of the “rudderless and joyless” country Trump and his team was leading. He urged his listeners to “vote them out.”

Back in 2017, Springsteen even went so far as to write a song with anti-Trump lyrics. Called “That’s What Makes Us Great,” the diddy referred to Trump and his supporters as “a con man and his crooks,” and proceeded to rebuke the country for refusing to elect Hillary Clinton, the candidate Springsteen campaigned for that cycle.

And after all that, we are skipping apologies and moving straight on to unity? So, because Mr. Springsteen is doing his best ranch hand impression while standing in snow covered midwest scenery next to some car that Jeep is trying to sell, conservatives will forget the last four years happened? The whole thing just came off as cheap, cynical and manipulative.