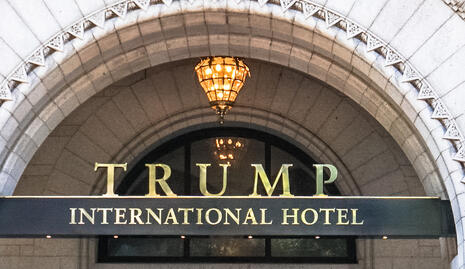 Trump  Derangement Syndrome can have such a powerful effect on people that it can cause them to inadvertently praise their targets while simultaneously slamming their TDS allies without them even being aware of it. This can produce quite a comical effect as was the case of the Friday article in Washingtonian magazine in which Jessica Sidman attempts to slam President Donald Trump and his friends but, due to the TDS boomerang effect, does just the opposite.

You can see Sidman’s intended target in the title of the article, “Trump Hotel Employees Reveal What It Was Really Like Catering to the Right Wing Elite.” The subtitle lists what are supposed to be among the horrors of the Trump International Hotel but when you actually read the story, it turns out to be anything even close to being much of anything: “Four years’ worth of stories about VIP visits and grooming protocols, palm-greasing, rotten vegetables, and that time they lost Steve Mnuchin’s coat.”

The first laughable revelation portrays Trump as being a stickler for cleanliness as well as having a fondness for Diet Coke. Oh, the horror!!!

As soon as Trump was seated, the server had to “discreetly present” a mini bottle of Purell hand sanitizer. (This applied long before Covid, mind you.) Next, cue dialogue: “Good (time of day) Mr. President. Would you like your Diet Coke with or without ice?” the server was instructed to recite. A polished tray with chilled bottles and highball glasses was already prepared for either response. Directions for pouring the soda were detailed in a process no fewer than seven steps long—and illustrated with four photo exhibits. The beverage had to be opened in front of the germophobe commander in chief, “never beforehand.” The server was to hold a longneck-bottle opener by the lower third of the handle in one hand and the Diet Coke, also by the lower third, in the other. Once poured, the drink had to be placed at the President’s right-hand side. “Repeat until POTUS departs.”

Next we find out much to the shock of Jessica Sidman, that Trump likes his ketchup fresh:

The manual instructed the server to open mini glass bottles of Heinz ketchup in front of Trump, taking care to ensure he could hear the seal make the “pop” sound.

It was the freshness “pop” heard round the world! Will the Trump Hotel scandals never cease!

Such junk food craving is obviously an impeachable offense and thanks to the new TDS rules he can be impeached yet again.

Digging even deeper into the moral morass, Sidman discovers that Trump’s family was polite. You heard it here first. They were (gasp!) polite:

Trump’s children were fairly low-key and polite. (The most salacious detail any former staff offered about Ivanka is that one time she showed up in yoga pants and indulged in a single margarita.) “They just came in, did their thing, and left,” says former assistant general manager Alyssa O’Clock. “Ivanka would sit with her back to the rest of the dining room. She didn’t really want to be seen there, necessarily.”

Remember the Steve Mnuchin coat the hotel lost that was referenced in the subtitle? You would expect that he went berserk over that. Well, Sidman reveals the dirty details about what really happened.

Treasury Secretary Steve Mnuchin and his wife, Louise Linton, who briefly lived in the hotel, were among the few allowed to occupy Trump’s table, sometimes with one of Linton’s purse-size pooches in tow, Paris Hilton–style. Their preferred Pinot Noir was also kept in stock even when it wasn’t on the menu. But not even they were immune to mishaps. During the 2017 inauguration, the staff had gotten crushed tending to the throng, then scrambled to find Marla Maples a table when she showed up without a res—so overwhelmed, in fact, that the restaurant lost Mnuchin’s coat.

“There were so many people in that hotel, and the hotel wasn’t ready to take all the coats, so we were trying to help out,” the former general manager says. Mnuchin, thankfully, wasn’t a jerk about it.

Like Trump’s family, Mnuchin was also polite. …And now on to more horrors of the Trump Hotel such as the fact that the staff was well paid.

The upper echelon of hotel management portrayed themselves as true Trump believers, but the majority of those who fed and cleaned up after the right-wing clientele were ambivalent at best. They clocked in because the place paid well. Really well. Michel Rivera, a former bartender at the lobby bar, says he pulled in more than $100,000 a year with tips (at least $30K more than he made at the Hay-Adams). He says it’s the best-paying job he’s had in his 25-year career, with generous health benefits to boot—a comment echoed by many other ex-employees.

“People would literally come up to me and give me $100 bills and be like, ‘You must be the best bartender in the world if you work here!’ ” Rivera says. “A group of three or four guys would come up, have a round of drinks—I could easily sell them over $1,000. You don’t see that at too many bars.”

Sidman details bad business practices…but not by the Trump hotel. By those suffering from TDS to the point where they engaged in unethical retaliation against the Trump hotel.

A micro-green supplier that Matijevich had previously worked with ditched him, saying it couldn’t deliver to the hotel in good conscience. Williamson, who joined BLT in early 2018 and worked there two years, found that food purveyors with whom he’d had great relationships were suddenly sending him rotten produce and subpar cuts of meat and fish. “I had to double- and triple-check a lot of this product,” says Williamson, who now operates a boutique butcher shop in Mount Pleasant. “I guarantee someone in that warehouse picking this product saw where it was going and was like, ‘Oh, f— it, give ’em this stuff.’”

Finally we learn that despite being well paid the employees were treated poorly…but not by the Trump hotel. By the people, such as the ones Sidman is writing for, who suffered from extreme TDS.

At a certain point, the disdain became too much even for one manager who was pro-Trump and loved the job. “We work every day—10, 12 hours—to make people happy with great food, and we have no [dining] coverage,” he says. When he took a break on the hotel terrace, joggers would give him the finger. One time, he says, he wore his uniform on the Metro to work and fellow passengers yelled at him, “Shame on you! How can you work for a person like that? You’re a racist!” He never commuted in uniform again. Eventually, he just didn’t want to deal with the harassment anymore. He left.

So it turns out that an article purporting to reveal the poor working conditions at the Trump International Hotel inadvertently boomeranged by revealing that the employees were well paid and that their poor treatment was meted out by the TDS crowd that Sidman caters to.

Why ‘Equity’ Is a Bad Fit for Our Legal System
The Democrats Are Totally Abusing Nonprofit Vehicles – Use Them in Efforts to Steal the 2020 Election
Secretary Blinken, Don’t Downplay the Importance of Religious Freedom
Todd Whines Over ‘Very Extreme’ GOP Defending Gun Rights
TikTok Continues to Suppress Videos Critical of the CCP, Indicating That It Misled the Public