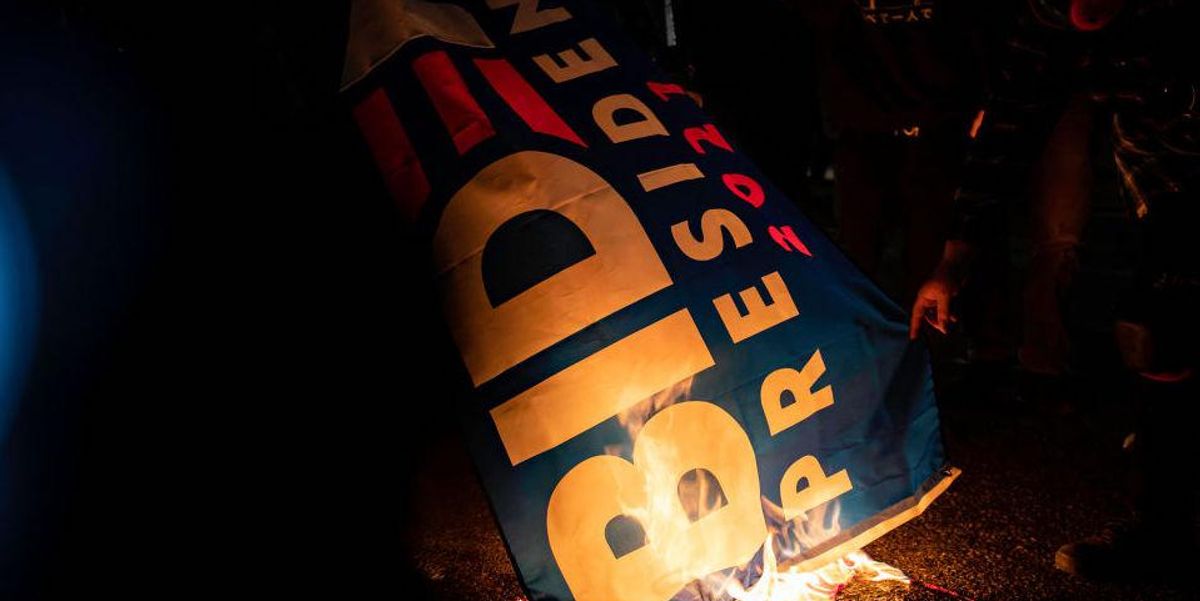 Violent protesters, who were reportedly associated with Antifa, marched down the streets of Portland’s Pearl District smashing cars and vandalizing businesses.

Businesses in the district have been coated with graffiti decrying police and Immigration and Customs Enforcement. Demonstrators also broke windows at some businesses.

A Chipotle on Northwest Lovejoy Street had its windows smashed out at around 9:30 p.m. Saturday while customers were still inside. Other businesses caught in the damage include a Starbucks, an Urban Pantry and an Umpqua Bank. As protesters chanted for police to “go home,” residents shouted at protesters from their balconies to “go home.”

Other videos showed police reportedly backing away from engaging the protesters because of their level of violence.

According to KOIN, Portland police forces were strained as the violence was ongoing, limiting their abilities to enforce the law, because of “several shootings” that had occurred in other parts of the city.

Just two people were arrested, one person for first-degree criminal mischief and a 17-year-old protester on charges of interfering with a peace officer and third-degree escape.

Why were they protesting?

The pre-planned violence came in response to immigration policy being enacted under Biden, KOIN reported, specifically the reopening of a detention center for unaccompanied migrant children.

The facility — located in Carrizo Springs, Texas — is capable of housing hundreds of children, and was the site of controversy under former President Donald Trump.

The Biden administration said reopening the facility was necessary because of a spike in border crossings and coronavirus-related restrictions meant other government facilities designed to house migrant children have lower-than-normal capacity limits.

“It’s unnecessary, it’s costly, and it goes absolutely against everything Biden promised he was going to do,” Linda Brandmiller, a San Antonio-based immigration lawyer who represents unaccompanied minors, told the Washington Post. “It’s a step backward, is what it is. It’s a huge step backward.”

“When I read they were opening again, I cried,” Rosey Abuabara, a San Antonio immigration activist, said. “I consoled myself with the fact that it was considered the Cadillac of [migrant child] centers, but I don’t have any hope that Biden is going to make it better.”