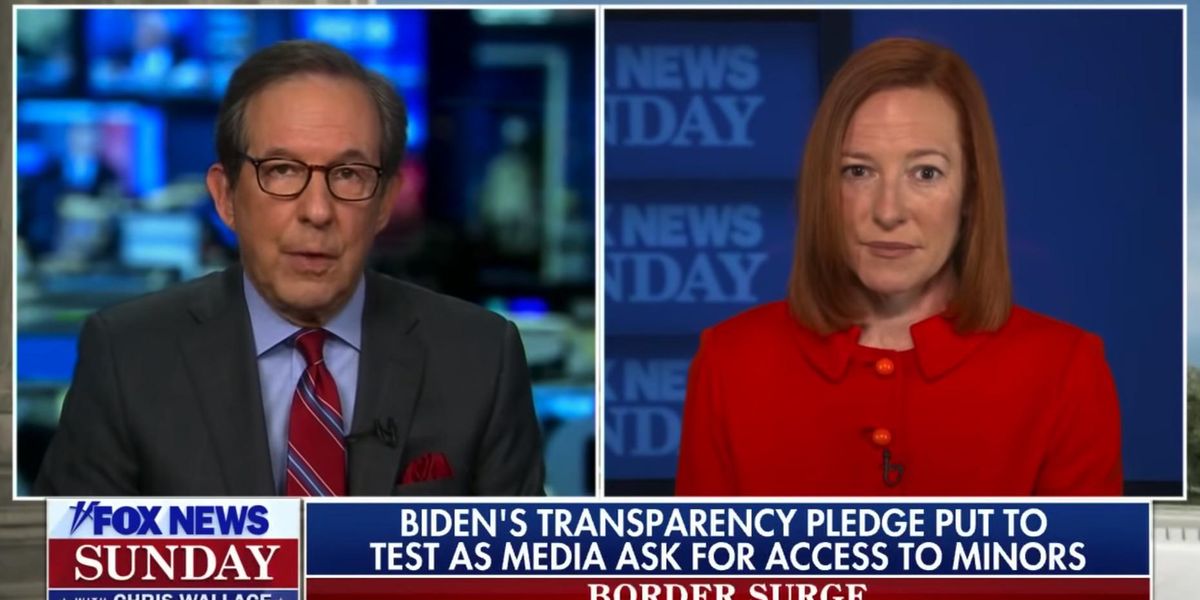 Journalists have accused the Biden administration of blocking media access to document the border crisis. Award-winning photojournalist John Moore said he was even forced to photograph the crisis from the Mexico side of the U.S.-Mexico border.

“I have photographed CBP under Bush, Obama and Trump but now — zero access is granted to media,” Moore said earlier this month. ” Until now, US photojournalists haven’t needed to stand in another country to photograph what’s happening — in the United States.”

In fact, NBC News reported the Biden administration enacted an unofficial “gag order” on Customs and Border Protection agents, limiting what information they share with journalists and restricting media access to migrant facilities. Homeland Security Secretary Alejandro Mayorkas has denied that such an order exists.

What happened between Wallace and Psaki?

While being interviewed on “Fox News Sunday,” Wallace confronted Psaki, and pointed out the Biden administration is being “less transparent than the Trump administration.”

Wallace began by acknowledging the fact that Americas only know about the conditions of migrant detention centers because members of Congress, who have toured some facilities, released pictures of the detention centers.

Psaki responded by claiming that Biden, Mayorkas, and the entire administration is “absolutely committed” to providing media access.

“When?” Wallace shot back.

Psaki claimed the administration provided Fox News with access to a facility just last week, adding the Biden administration is not blocking media from the facilities, but rather is limiting access because of the COVID-19 pandemic.

However, Wallace pointed out that Fox News was not granted access to a Border Patrol migrant detention facility, but a different facility operated by the Department of Health and Human Services.

“Just to clarify, Jen, you allowed a camera crew in to see the HHS facilities. What we’re talking about here are the Border Patrol facilities, the detention cells,” Wallace pointed out as Psaki attempted to interrupt. “There is a law — let me just finish — that they are not allowed to be there for more than 72 hours, many of them are there for 10 days.”

“At this point, in terms of allowing access to Border Patrol facilities for reporters, you are being less transparent than the Trump administration,” Wallace added.

When Biden was confronted over the media access issue last week, asked by a reporter specifically when journalists would be granted additional access to document migrant conditions, Biden responded, “I don’t know.”