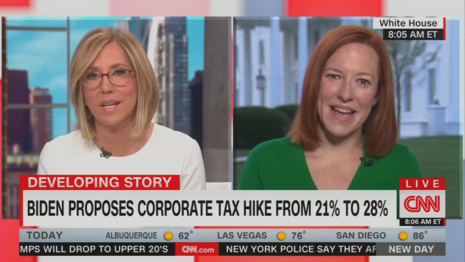 On the daytime-dominating Chauvin trial, she floated Psaki a fluffy softball, asking “what has struck [Biden]” it. Psaki said that in response, Biden “reiterated his own personal commitment to making equity a part of what we do in this government.” And Psaki chipped in her own personal reaction, saying that the testimony of one of the witnesses yesterday gave her “chills.”

Camerota also took a couple of shots at the GOP.  On the subject of Biden’s tax increase, Camerota spoke of “intransigent Republicans.” In contrast, she was much more respectful of swing-state Democrats who are also opposed, simply saying they “don’t like the idea of taxes being raised.”  And on the question of exploding the national debt and deficits, Camerota mocked: “I know that Republicans always find religion on this whenever it’s a Democratic president.” That elicited chuckling agreement from Psaki.

It’s shocking Camerota but failed to ask anything about the border crisis, despite the distressing reports of children crammed into overcrowded facilities.

There are also reports that border crossers are being put on buses and sent across the country with a hearing date 3-4 years into the future! In other words, they’re gone, unlikely to be subject to government control again. Free to seek work illegally, apply for government benefits, and who knows–get a no-ID absentee ballot to be harvested by a Democrat operative.

Compare and contrast how an actual journalist recently handled the matter. As NewsBuster Curtis Houck has noted, “Fox News’s Kristin Fisher questioned Psaki on a FoxNews.com exclusive revealing that illegal immigrant children housed at the San Diego Convention Center are being given in-person schooling while actual San Diegans continue to languish in virtual learning.”

And true, dog-bites-man is not normally big news. But when the dog in question belongs to the President of the United States, and has now bitten someone for a second time, a question was in order. But Camerota again failed to do her journalistic duty—not a word about Major’s latest attack. NewsBuster Nicholas Fondacaro has noted how CBS and NBC also failed to report Major’s most recent bite.

Note: if Camerota failed to ask about Major’s latest chomp, over on Morning Joe, Mika Brzezinski flat out defended the dog—and even found a way to blame President Trump for the incident! She declared, “I stand with Major,” and claimed Major was reacting to the bad energy left behind in the White House by the Trump administration!

You might say that when it came to interviewing a senior member of the Biden administration, CNN was a toothless dog that didn’t bite. Of course, the next time CNN interviews a conservative, you can expect the network to transform into an . . . attack dog!