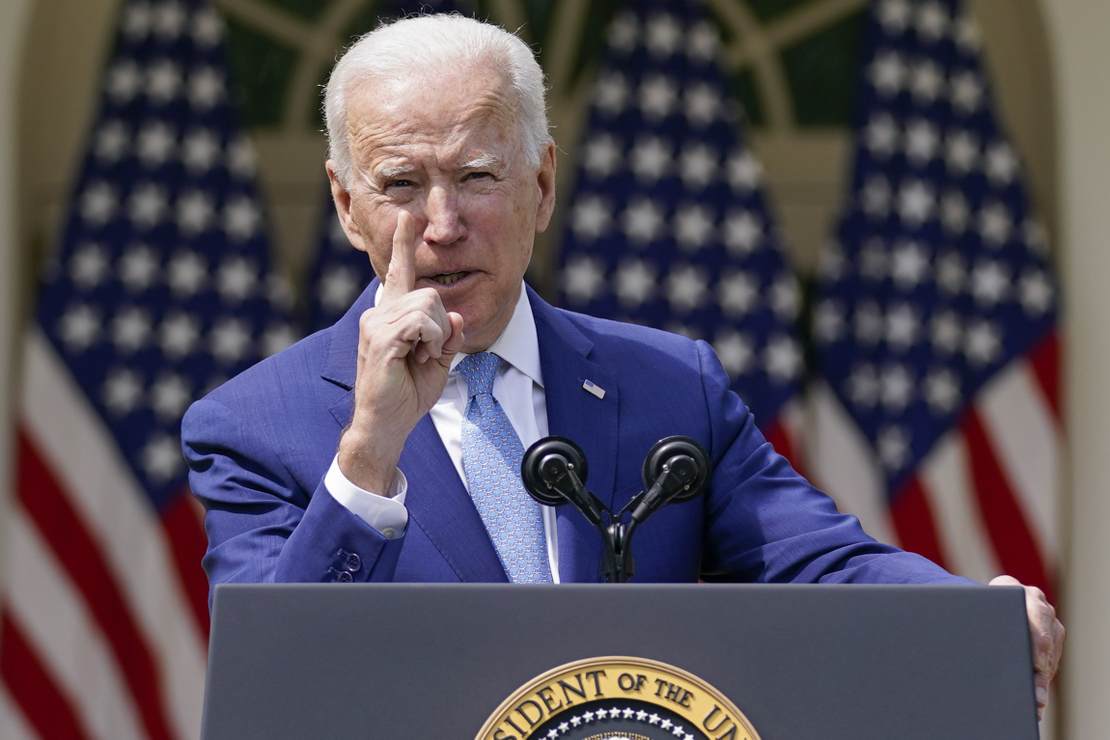 Democrats aren’t even pitching any policies as good for the majority of the country. They’re pitching tax hikes, open borders, more lockdowns, payoffs to their pet constituencies…nothing for the average American who’s just trying to survive.

The Democratic Party, at the local level anyway, approached the COVID pandemic with two policies in hand that obviously contradicted each other.

On the one hand, they locked down law-abiding Americans wherever they could get away with it. Many Democrat states are still locked down a year later.

On the other hand, they let criminals out of jails and prisons en masse right at the start of the COVID crisis.

There was little if any logic to either choice. Lock down Americans who’d broken no law, but set free criminals who had — both supposedly to stop the spread of a virus.

Lockdowns add stress and confine people to their homes while destroying the economy. Lockdowns of those who are not sick or stricken with the pandemic have not been used in the past, not against the flu pandemic of 1968 (Woodstock went forward during that one), not even against the Spanish Flu during World War I. The sick were quarantined, the healthy took some sensible countermeasures to keep from getting sick, but they weren’t locked down and forbidden to work, go to church or school, or live their lives.

Freeing criminals from jails was also not used in previous pandemics.

That setting thousands of convicted criminals free would have consequences on public safety was never even discussed. The media refused to ask any Democrat official about it. Democrats claimed at the time that the criminals being freed were only non-violent offenders, but that never represented the whole story. Many thousands of criminals were incarcerated on whatever charges a DA could make stick in court, not necessarily their most heinous crimes, or they pled down to lesser crimes to avoid longer sentences or for other reasons. The charges on which a given inmate has been incarcerated may have been “non-violent” but that doesn’t mean the inmate wasn’t violent or wouldn’t engage in violence once they were arbitrarily freed.

After freeing thousands of convicted criminals, the Democrats went on a campaign to “defund the police.” The negative effects that would have on public safety were discussed here on sites like ours but not in the so-called mainstream press by and large. Some local outlets covered the consequences, rising crime rates and the like, but there was no national outlet with 24/7 airtime that used that time to do any deep dives into how freeing criminals and then defunding the police would affect public safety.

National Democrats could have resisted these measures but they didn’t. They actively promoted them and only backed away on defunding police when polls showed them how wildly unpopular that is.

Joe Biden added yet more illogic to the national discussion Thursday when he called for “red flag laws” to combat what he deemed a “public health crisis” — gun violence.

Biden should be asked about the chain of events that got us here — freeing thousands of criminals, defunding the police, then rising violence on America’s streets. It’s very easy to draw a line from one to the next. Media aren’t doing that. Democrat policies have directly led to the “crisis” Biden claims exists.

Media also aren’t asking who will enforce red flag laws should Biden get his way. Who would do that? Police are reeling all over the country from defunding and from learning that their city councils do not have their backs. They are leaving the job as fast as they can in Portland and Austin, and we can expect this trend to continue in other Democrat cities. DAs in heavily Democrat jurisdictions such as San Francisco, Portland, Seattle, Los Angeles, Austin and others are declining to prosecute what they deem low-level crimes. But police will be used to enforce red flag laws against Americans who have committed no crime? On what grounds?

There’s no logic to this. Defunded police simply won’t have the personnel to enforce these laws. Sheriffs won’t enforce them. Republican states will not use state resources to enforce them. Who will enforce them? Where such laws would be enforced, Democrat states, confrontations between citizens and police officers would increase. Yet Democrats claim they want to use social workers to respond to more calls that police currently respond to to mitigate conflict. Huh?

It’s not a given that Democrats even care if red flag laws would be enforced. Should they get them passed, which isn’t likely, they would merely declare the crisis hasn’t abated and move on to some other measure that’s also designed not to work but which would target your right to self-defense (and leave criminals on the streets).

To the extent that public safety is a crisis, and I believe it’s heading that way rapidly, remedies are simple and available: restore police funding, restore prosecution, stop emptying jails, secure the border. It’s so easy anyone but a Democrat could do it. Anyone but a member of the mainstream media can see it.

There’s no logic to the Democrats’ open border policies and lockdown policies. Joe Biden has warned governors not to open up their states, while he has also left the border wide open, allowing cartels practically free reign and also allowing COVID-positive migrants into the country. Business is booming for human traffickers and drug cartels, not so much for America’s legal mom-and-pop businesses which are the backbone of the country. Biden and his party are still destroying those.

It’s worth suspecting that he and his party want the open border to create demographic changes they believe will benefit their party, and that may be true. It’s also obvious that Biden and his team are wildly incompetent and guided by no concrete principles of governance. There is no A leads to B leads to C logic at work in much of what they do. It’s flailing toward catastrophe.

Is the catastrophe intentional? The Democrats’ gaslighting on policy after policy seems to be. They’re corrupting language to the point that words no longer mean anything. They’re attacking the country’s Constitution and founding every chance they get. Biden attacked the Constitution at least twice during Thursday’s announcement of his gun executive orders, when he declared that no constitutional amendment is “absolute” and snidely insisted that when the Constitution was written “certain people weren’t allowed to have guns.”

He was referring to slaves in the latter comment, of course. When Democrats discuss the Constitution, they generally attack that aspect of it, deliberately undermining America’s founding. They never acknowledge the fact that the United States inherited slavery and had to cope with it during a revolution and the chaotic early years of the republic, which was itself without parallel on the world stage at the time. The founders worked through extremely difficult circumstances, the kind that try men’s souls, and worked a modern miracle that still stands.

Democrats would cancel the founders and all they did if they could. The Constitution limits Democrats’ ability to control citizens, they know that, and they hate that.

Biden also said “no amendment to the Constitution is absolute.” The First and Second? How about the 19th? He’s once again intentionally undermining the Constitution. He swore an oath not to do that and to oppose anyone who does.

The Democrats’ constant gaslighting serves a few purposes. It moves the goalposts on one policy after another minute by minute. Most Americans can’t keep up with it and don’t bother to. This lets the Democrats just keep advancing and expanding their ever illogical but emotionally-packed arguments to expand government power over us. It creates new arguments and divisions and draws battle lines where Democrats want them drawn, knowing the media won’t hold them to account for any of it. They also know they have a ready army of social media warriors standing by to cheer them on no matter what. The gaslighting injects emotion into policy discussions, where they know they can more easily manipulate poorly informed Americans. The gaslighting makes sane people feel like they’re losing touch with a country that seems to be slipping away.

That’s not your imagination. America is slipping away.

We have to keep fighting, here and in the states, or it will be gone. Democrats will keep pushing America to the brink unless and until they’re stopped.

I’ll close with some good news. Citizens and states are fighting back. The Democrats’ star governors, Cuomo in New York and Newsom in California, face impeachment and recall respectively. No Democrat governor is being touted now as any kind of savior. They’re all villains. Florida and Arizona have become Second Amendment sanctuary states; Texas and others will soon follow. Several states have banned vaccine passports, including Florida, Texas, and Tennessee. Massachusetts has even joined the anti-vaccine passport states. Biden’s executive gun diktats will be challenged in court. Congress is unlikely to pass any of his agenda, so he will attempt to pack the courts. Republicans will challenge that. Republicans also control state redistricting in a majority of the states. And local law enforcement either won’t or can’t enforce Biden’s gun executive orders anyway. Biden believes he’s creating an unchallengeable presidential power, but the truth is, he may be hollowing the presidency out. He is setting the nation down a path of internal conflict, which empowers China for now, but may end up breaking the Democratic Party. Time will tell. And it will take states and citizens fighting him at every turn. Fighting back will take moral courage. If you have that, you’re halfway to winning already because the Democrats have none.