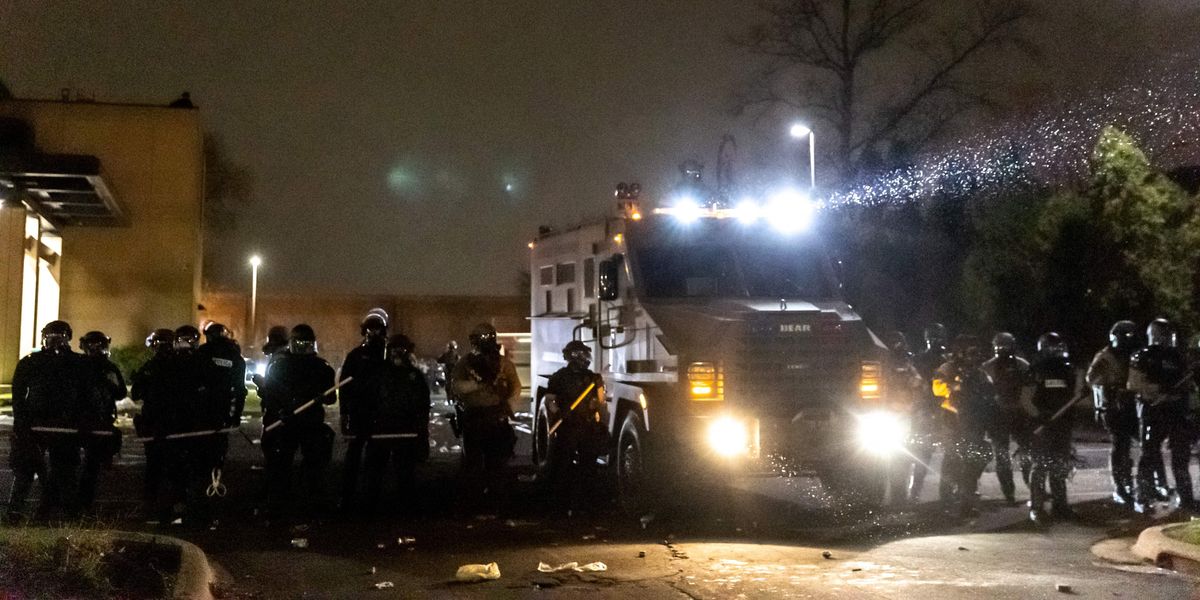 A vast crowd of 100 to 200 people marched toward the Brooklyn Center Police Department in Minneapolis, Minnesota, on Sunday evening following an officer-involved shooting, NBC News reports.

Police fatally shot a black motorist during a Sunday traffic stop, sparking riots just miles from where George Floyd took his last breath in May.

The unruly crowd — which threw rocks and other objects at the department building — gathered outside the police department, prompting the state to mobilize its National Guard.

The outlet also noted that there were reports of shots fired in the area of the department as officers fired rubber bullets and tear gas at rioters.

“The front door of the Brooklyn Park Police Department … was struck by gunfire, shattering the glass, police said in a statement,” NBC News reported. “Brooklyn Park Police officers were not involved in the shooting but assisted Brooklyn Center Police with the ‘civil unrest’ that took place after, the department said.”

Police in Brooklyn Center, Minnesota, have fired a whole lot more smoke and chemical agents at protesters who are a… https://t.co/xWL46aSkrl

The damage wasn’t just contained to the department building, authorities said. Approximately 20 businesses were broken into and vandalized at a nearby shopping center.

According to reports, members of Wright’s family as well as friends were among the protesters who marched in the streets, carrying flags and signs that read, “Black Lives Matter.”

In a statement, Elliott said, “Our hearts are with (Wright’s) family, and with all those in our community impacted by this tragedy. While we await additional information from the BCA who is leading the investigation, we continue to ask that members of our community gathering do so peacefully, amid our calls for transparency and accountability.”

What do we know about the shooting?

Katie Wright, the victim’s mother, told reporters that she received a phone call from her son on Sunday afternoon telling her that police pulled him and his girlfriend over for reportedly having air fresheners dangling from the vehicle’s rearview mirror.

It is illegal to hang anything from rearview mirrors in Minnesota.

Katie said she told her son to put the officer on the phone so she could provide insurance information.

The last thing she heard was police telling her son to get out of the vehicle and demanding he refrain from running.

“I heard police officers say, ‘Daunte, don’t run,'” she recalled. The call ended, she said, and she immediately phoned back and reached her son’s girlfriend.

“A minute later I called, and his girlfriend answered, which was the passenger in the car, and said that he’d been shot,” Katie said.

In a statement, Brooklyn Center Police said that officer pulled a man over for a traffic violation on Sunday afternoon and discovered that he had an outstanding warrant. As police attempted to take the subject into custody, he reportedly attempted to get back into the vehicle. One officer shot the subject, who attempted to drive off. The subject was able to drive several blocks before striking another vehicle. The subject reportedly died at the scene.

In a Sunday night statement, Walz said, “I am closely monitoring the situation in Brooklyn Center. Gwen and I are praying for Daunte Wright’s family as our state mourns another life of a Black man taken by law enforcement.”

I am closely monitoring the situation in Brooklyn Center. Gwen and I are praying for Daunte Wright’s family as our… https://t.co/MkjJF8eXkI