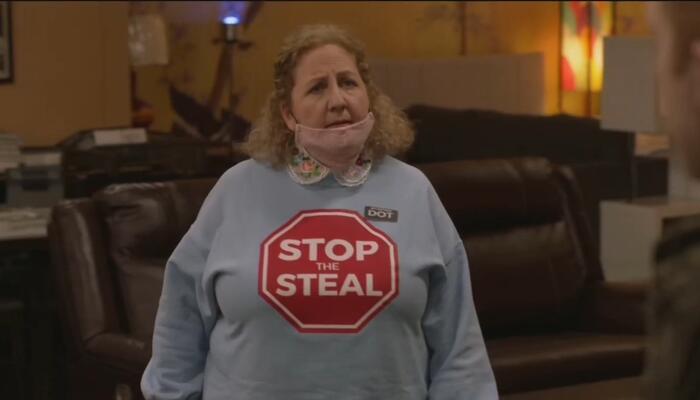 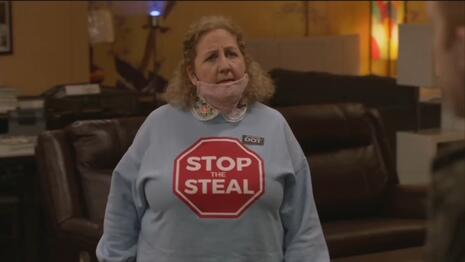 The Trump-deranged entertainment industry has resorted to lampooning Trump voters since the bad Orange Man is no longer in office. An example of this aired during the April 11 episode of Showtime’s Shameless.

In the series finale, titled “Father Frank, Full of Grace”, Ian Gallagher (Cameron Monaghan) and his husband Mickey Milkovich (Noel Fisher) are furniture hunting for their new apartment. A clerk comes to help them and is wearing a “Stop the Steal” sweatshirt. This is a reference to President Trump’s claim that the 2020 election was stolen from him. Ian, a Biden supporter, notices but doesn’t say anything until Mickey asks her about it. Mickey, not the sharpest tool in the shed, asks, “Did someone steal something?” Ian quickly tells him the slogan is about the election. The clerk says, “The president won in a landslide.” Ian argues, “I agree. Biden won in a landslide.” She goes on to say that Communists in Venezuela hacked the election results and it quickly goes downhill from there with Ian comparing her to Hitler’s wife. Ian and Mickey end up just walking out.

Clerk: May I help you?

Ian: Yeah, my, uh… Husband and I need some stuff for our new apartment.

Mickey:  Hey, you-you got any mattresses that do that, like, lift-up thingy? I can get my ass in that position you like.

Mickey: Hey, someone stealin’ something? Kind of hard to imagine anybody walkin’ out the front door with one of these big-ass chairs under their coat.

Ian: Stealing the election, Mick. Look, if we wanted to rent something, do we need to sign, like, a form or something?

Clerk: Are you interested in a living room or dining room set or both? The president won in a landslide.

Clerk: The election results were hacked by communists in Venezuela.

Ian: Venezuela? What the hell have you been smokin’, lady?

Mickey: Where the fuck’s Venezuela, anyway?

Clerk: The liberal media called the election for Sleepy Joe and “Komola,” even though we all know they lost.

Ian: Her name is Kamala, and Sleepy Joe kicked your guys’ comb-over ass.

Ian: Okay, and where the hell were you on January sixth, Eva Braun? Were you storming the Capitol with a fuckin’ hockey stick?

Ian: All right, all right, we’re getting outta here.

Ian:  No. Gotta go. We can’t be late to the Zionist sex-trafficking cabal meeting at the fucking Pizza Hut!

Hollywood doesn’t have President Trump to kick around anymore. Now they do it to his voters. How brave. Shameless, indeed. Good riddance.

Ocasio-Cortez lashes out at Joe Biden for declaring that Israel has a right to protect itself from rocket attacks
Cheney sticks to her guns against Trump’s ‘lies’ in speech before expected ouster from leadership
Kruiser’s (Almost) Daily Distraction: Hate Is Exhausting, Bring on the Frivolity
Lockdowns in Vain? Homes More Dangerous for COVID Spread Than Work and School, Study Claims
RACIST Joy Reid: ‘Jim Crow’ Ted Cruz Is a Betrayal to His Race for Opposing Voting Bill