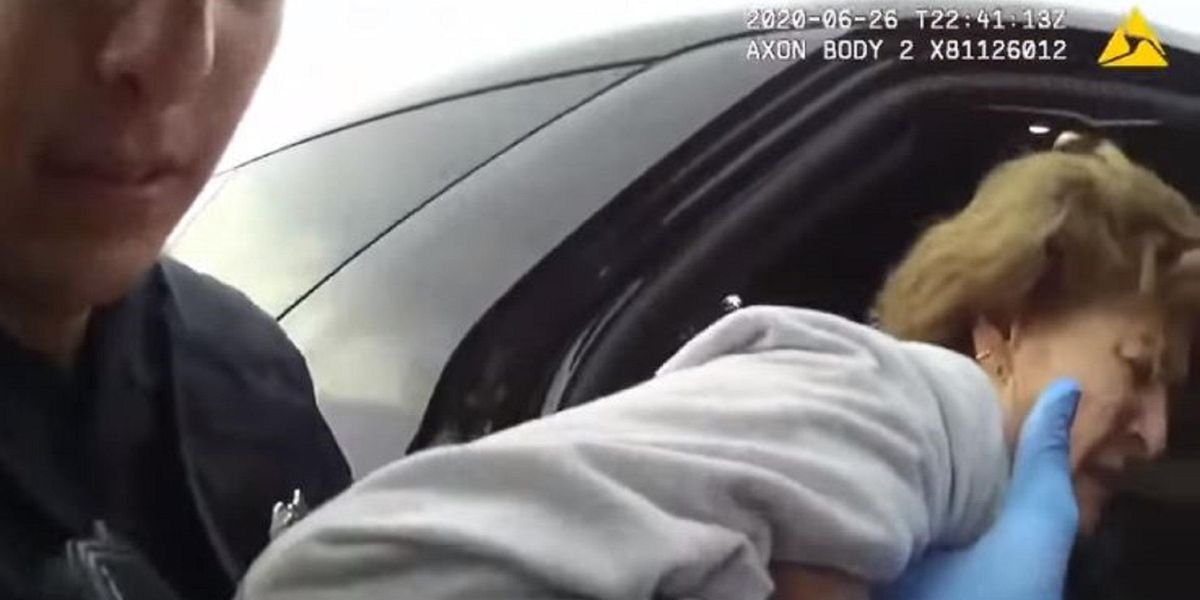 The attorney for a 73-year-old dementia patient has released surveillance video showing Loveland, Colorado, police officers laughing as they reviewed body camera footage of the arrest of her client — who was later hospitalized for her injuries.

The dementia patient, Karen Garner, was arrested last summer by officers responding to a call from a local Walmart that she had left without paying for $14 worth of items, ABC News reported.

Bodycam footage shows Officer Austin Hopp approaching her while she’s picking wildflowers in a field near the store, where he asks why she did not stop. She appears confused and repeatedly insists she is “going home” as he throws her to the ground and handcuffs her.

She is then pressed against the hood of a patrol vehicle and officers push her left arm up near her head. Another officer, Daria Jalali, assisted in the arrest.

During her arrest, officers struggled with Garner, and concerned onlookers can be seen on the footage confronting the officers over their level of force.

Garner’s attorney, Sarah Schieke, says her client was hospitalized after her detainment for a broken arm, separated shoulder, and a sprained wrist, the Washington Examiner reported. The lawyer filed a lawsuit against the department afterward, claiming Garner was not given medical assistance for six hours.

Then on Monday, Schieke released surveillance video from within the police department, showing Hopp, Dalali, and another officer watching the bodycam footage following Garner’s arrest.

Hopp can be seen telling the other officers, “Ready for the pop? Hear the pop?” acknowledging that something snapped when he was detaining Garner.

Another male officer asks, “What did you pop?” and Hopp responds, “I think it was her shoulder.”

Officer Dalali can be seen laughing along with other officers at some points in the surveillance video, but eventually asks, “Can you stop it now?” covering her head while the bodycam footage plays.

Dalali can also be seen checking in on Garner in her cell.

The released surveillance video may be viewed below in its entirety. The point where the officers are reviewing the footage together starts around the 45:45 mark:

Family members of Garner say she has never been the same since her arrest and the injuries she sustained. They moved her out of her apartment and into an assisted living facility, saying her dementia symptoms were exacerbated by the incident.

Garner’s loved ones told The Denver Post, that when they picked her up from the hospital, she kept repeatedly asking, “Why did they hurt me?”

Her daughter-in-law, Shannon Steward, told the newspaper, “She hasn’t come back the way she was before.”

Alissa Swartz, Garner’s daughter, told the outlet, “I just feel like I didn’t protect her. I wasn’t there to keep her safe from the police, who are supposed to protect her.”