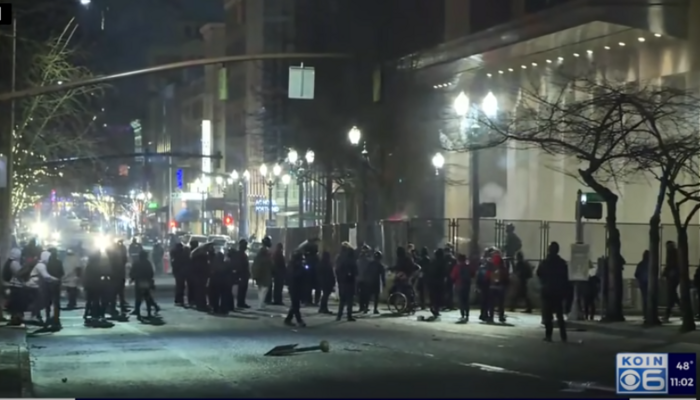 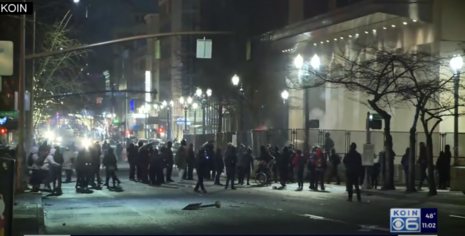 New York Times Seattle bureau chief Mike Baker went to Portland, Oregon and committed one of the few and far-between pieces of actual journalism from the long-standing riot area in that city, where left-wing radicals and anarchists have been granted free reign to pillage and vandalize in the name of anti-fascism. The rather slanted print headline on the front page of Wednesday’s National section read “Vandalism Fuels Wrath And Division In Portland.”

The focus was on the city’s beleaguered Democratic Mayor Ted Wheeler finally promising to crack down on the endless rioting (after Wheeler wasted 2020 fulminating against then-President Trump for criticizing deploying the feds to Portland to protect federal buildings).

One could argue Baker has neglected his own beat, given that his San Francisco-based colleague Nellie Bowles was the one who reported on violent left-wing protests in Seattle back in September 2020. Still, Wednesday’s article makes a change from Baker’s previous no-worries reporting on the Portland mayhem.

After the protests have concluded, sometimes in the early morning hours, Margaret Carter finds herself climbing into her gray Toyota Camry and cruising the streets of Portland so she can see the latest damage for herself.

Ms. Carter, 85, has been downtown to the Oregon Historical Society, where demonstrators have twice smashed out the windows, recently scrawling “No More History” on the side of the building. She has driven past the local headquarters of the Democratic Party, where windows have also been shattered. Last week, she found herself at the Boys & Girls Club in her own neighborhood, nearing tears at the scene of costly window destruction at a place she has worked so hard to support.

“Portland was a beautiful city,” said Ms. Carter, who was the first Black woman elected to the Oregon Legislative Assembly and is now retired. “Now you walk around and see all the graffiti, buildings being boarded up. I get sick to my stomach. And I get angry.”

Mayor Ted Wheeler, himself a target of many of the protests as he oversaw a police department that has repeatedly turned to aggressive tactics, last week put into place a state of emergency that lasted six days and vowed to “unmask” those demonstrators who engaged in repeated acts of vandalism or arson, saying it was time to “hurt them a little bit.”

So far so good. But the following paragraph ended on a ridiculous note (bold added.)

The demonstrations over racial justice and police violence have struck a chord with many Portland residents, and the mayor’s effort has infuriated some in the progressive city’s more liberal corners. Mr. Wheeler’s call for crowdsourced surveillance has alarmed civil rights advocates, and critics say the city has failed to bring an end to acts of violence by the Portland Police Bureau, a demand echoed by hundreds of demonstrators who have not destroyed property.

Do they want a medal?

After pointing out “a small group of activists wearing black approached a group of journalists, threatening to smash the cameras of those who remained on scene,” Baker found some wrenching anecdotes of businesspeople whose livelihoods have been warped by the continuing mayhem.

The Times, and Baker, have definitely changed their tune on the violence and destruction in Portland, compared to their summer 2020 coverage. Back then the paper was far more worried about a “fascist” federal crackdown on the violence than the violence itself. A story featuring Baker’s lead byline blamed Trump for the everlasting riot in Portland (by contrast, President Biden is not mentioned in Baker’s current story).

Baker portrayed his own new article on a liberal light on Twitter, emphasizing the outrage of “racial justice and civil rights advocates.”

VACCINE REBELLION: Growing number of US states are refusing to go along with Biden’s covid vaccine fascism
Here’s How We Know Joe Biden’s COVID Response Has Been a Failure
Couch: Shohei Ohtani can thank Stephen A. Smith and social justice warriors for his soon-bestowed AL MVP award
Tribute to Norm Macdonald, the Last TRUE Hero in the War on Comedy & Free Speech
NHL’s Columbus Blue Jackets replace assistant coach because he declined COVID-19 vaccination