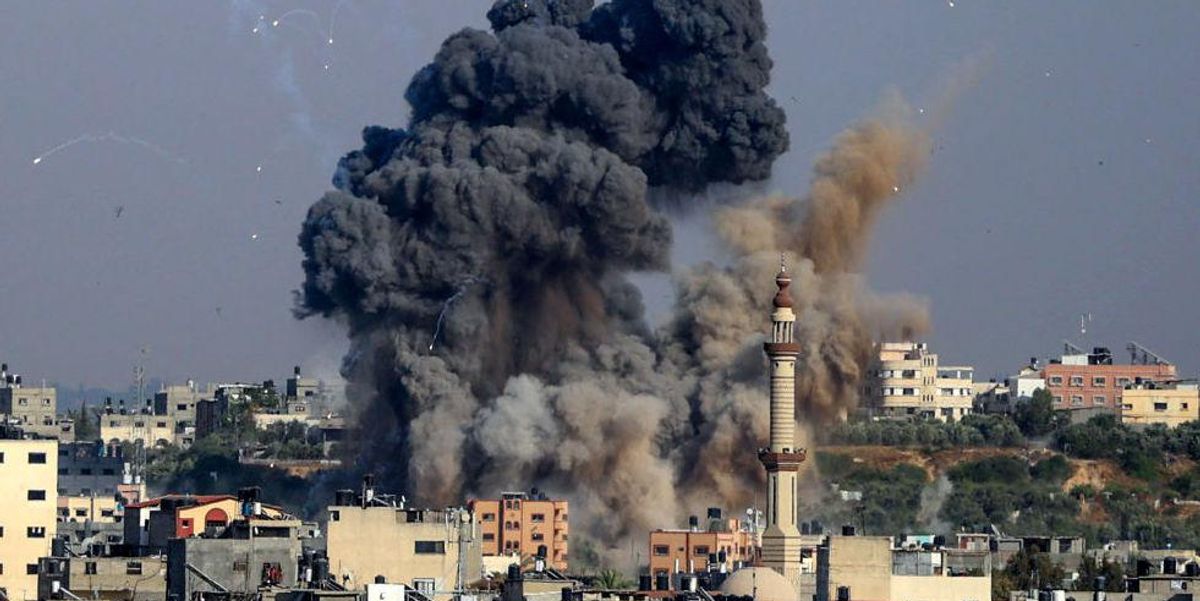 The Israeli Defense Forces successfully duped Hamas terrorists into believing Israeli soldiers would initiate a ground attack in Gaza, drawing the terrorists into underground tunnels before unleashing a massive air campaign on them.

Late Thursday night, the IDF began assembling ground forces along the Israel-Gaza border, indicating that a ground assault was imminent into the areas where Hamas terrorists have been launching a barrage of missiles into Israel.

At the same time, Israeli Prime Minister Benjamin Netanyahu said Israeli “would exact a very heavy price from Hamas and the other terrorist organizations.” Earlier in the day, Defense Minister Benny Gantz called up 9,000 reserve soldiers, according to the Jerusalem Post.

“IDF air and ground troops are currently attacking in the Gaza Strip,” the IDF tweeted.

IDF air and ground troops are currently attacking in the Gaza Strip.

Media outlets across the world then reported the alleged development, including the Washington Post and ABC News, the Jerusalem Post noted. The Post, for example, reported, “Israeli troops have entered the Gaza Strip as conflict with Palestinians escalates, Israeli military says.”

According to Israeli officials, assembling ground troops near the Gaza border and publicly claiming a ground invasion was occurring was tactical deception.

The intended goal was to provoke Hamas terrorists to enter their underground tunnel system, allowing Israeli forces to systematically target the tunnels and Hamas soldiers.

In total, more than 450 bombs were dropped on more than 150 Hamas targets during the air campaign.

Yes, the IDF had deployed troops along the border, but they did not cross into Gaza. What did happen was in the air where 160 aircraft had assembled for a massive bombing run over the Gaza Strip. Their target was what the IDF called Hamas’s “Metro”, an underground network of tunnels which Hamas used to store its weapons and to move throughout Gaza hidden from Israeli aircraft. The “Metro” had been built in the years after the 2014 war in the Gaza Strip, also known in Israel as Operation Protective Edge. It was a network of dozens of kilometers of tunnels that crisscrossed Gaza and provided safety from Israeli aerial incursions.

According to reports, due to the deployment along the border and the news coming out in the foreign media of a ground incursion, Hamas and Islamic Jihad sent their first-line of defense into the tunnels to start taking up positions. These were the anti-tank missile teams and mortar squads meant to strike at incoming Israeli ground forces. What these Hamas operatives did not know was that there was no ground offensive. Instead, once they were out of the tunnels, they were exposed to Israeli aircraft. Within minutes, the “Metro” attack went ahead. This led to speculation that the tweet about the ground incursion was intentional and made to get Hamas to believe it was safe to enter the tunnels.

Despite nearly one week of fighting, Israeli officials are not interested in a ceasefire as casualties mount on both sides, the Times of Israel reported.

The Jerusalem Post, however, reported that senior Israeli officials are now urging Netanyahu and Gantz to begin working toward a ceasfire.