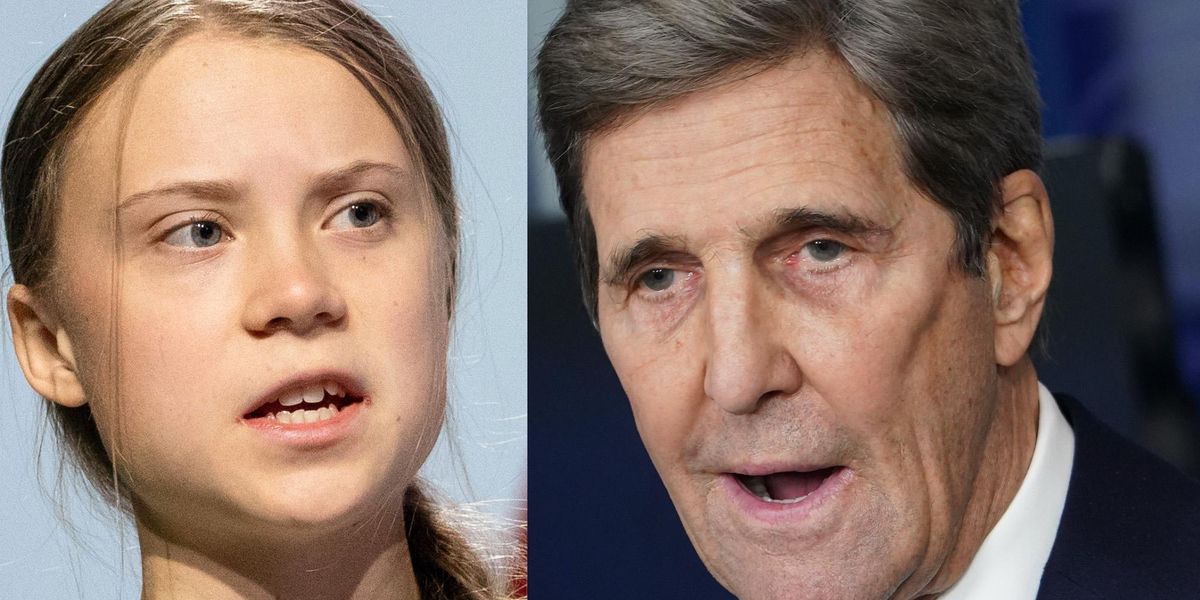 Kerry simply suggested that technological advancements will play a key role in lessening carbon emissions in an interview with
BBC that aired on Sunday.

“I am told by scientists, not by anybody in politics but by scientists, that 50% of the reductions we have to make to get to net zero by 2050 or 2045, as soon as we can, 50% of those reductions are going to come from technologies that we don’t yet have,” Kerry said.

“That’s just a reality,” he added. “And people who are realistic about this understand that’s part of the challenge.”

Kerry, 77, was arguing that Americans won’t necessarily need to drastically change their lifestyle in order to curb emissions because of expected advancements by tech companies.

Thunberg took to Twitter to ridicule Kerry and characterize his argument as one of pure fantasy.

“Great news! I spoke to Harry Potter and he said he will team up with Gandalf, Sherlock Holmes & The Avengers and get started right away!” she mocked.

“50% of the carbon reductions needed to get to net zero will come from technologies that have not yet been invented… https://t.co/puTpUUEEMk

She also retweeted a response to Kerry from climate scientist Michael Mann.

“This is one trial balloon that needs to be popped,” he tweeted with a link to Kerry’s comments.

Mann went on to accuse Kerry of participating in “pernicious technophilia” that had “infected” public discourse and blamed Microsoft co-founder Bill Gates for popularizing the idea that technological advances offered hope to lessen carbon emissions.

Despite his misgivings, Mann praised the Biden administration for their global warming policies in his own interview with BBC News.

Kerry defended his comments to Axios by referring to a finding from the International Energy Agency.

“IEA analysis shows that about half the reductions to get to net zero emissions in 2050 will need to come from technologies that are not yet ready for market,” said IEA chief Fatih Birol in April.

Republicans Shouldn’t Fall for Biden’s Infrastructure Charade
Homeless Man Arrested For Assaulting Gavin Newsom During His Visit to Downtown Oakland (VIDEO)
‘ISIS Obsessed’ Woman Converts to Islam, Plots Bombings in New York City Because of ‘Islamophobia’
Britney Spears delivers explosive testimony in conservatorship battle, says IUD was forced into her to prevent pregnancy
CNN’s Chris Cuomo uses MLK to rip Democrats for not getting tough with GOP on voting rights — and botches US history in the process