How Georgia Democrats Are Fudging Their Past Positions on Voter IDFulton Decision Protects Religious Liberty, but What’s It Mean for Creative Professionals?Drag queen show held at US Air Force base to reflect its commitment to ‘diversity and inclusion’ — and observers torch the decisionJoe Rogan says Hollywood is full of ‘insecure people’ who adopt ‘liberal sensibilities’ for fame: ‘It’s f***ing horses***!’Lemon Bemoans Lefty School Board ‘Dealing With B.S.’ of Parent ProtestBiden Says the White House and Senate Have a Deal on Infrastructure SpendingDr. Fauci Put in Kiddy Pool, Hosed Down in His ‘Skivvies’ After Opening Envelope with White PowderA Short History of Joe Biden’s Insanity on GunsThe Problems with Laurel Hubbard’s Qualifying for the Olympics as a Woman‘They can kiss my a**’: TNT told Charles Barkley not to say this. His response is PRICELESS.
Patriot Daily Press
Skip to content 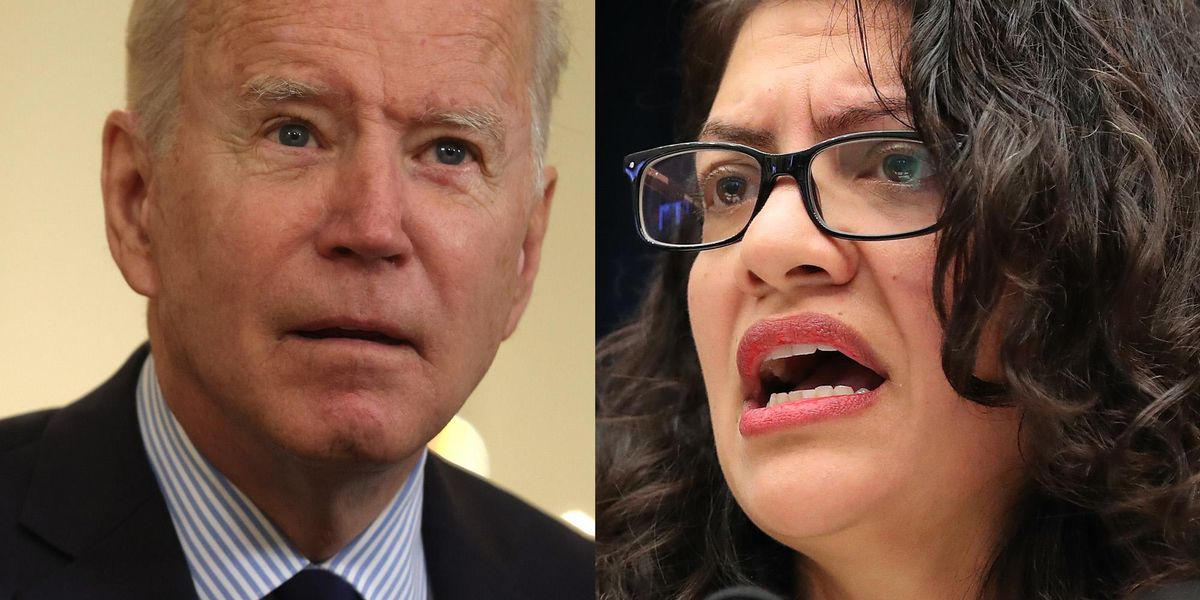 President Joe Biden’s attempt to heap praise on Rep. Rashida Tlaib (D-Mich,) during his speech at a Ford factory was undermined by his inability to pronounce her name correctly despite trying three times.

Biden was visiting the Ford Rouge Electric Vehicle Center in Dearborn, Michigan, on Tuesday when he made the remarks. He appeared to call the controversial far left congresswoman “Rashid” instead of her name, “Rashida.”

“I tell you what, Rashid, I want to say to you that I admire your intellect, I admire your passion, and I admire your concern for so many other people. And from my heart, I pray that your grandmom and family are well, I promise you I’m gonna do everything to see that they are, in the West Bank,” he added.

“You’re a fighter and God thank you for being a fighter,” Biden said as the audience applauded.

The comments came after Tlaib confronted Biden on the tarmac of Detroit Metropolitan Wayne County Airport about the mounting death count in the military conflict between Palestinians and Israel.

Biden angered many on the far left when he said in a statement on Wednesday that Israel had a right to defend itself against the rocket attacks being fired from the Gaza Strip.

Tlaib responded angrily by pointing out that Biden’s statement made no mention of the Palestinians at all.

“How many of my colleagues are willing to say the same, to stand for Palestinian human rights as they do for Israel? How many Palestinians have to die for their lives to matter?” she said in a speech on the floor of Congress.

Tlaib is the only Palestinian-American representative in Congress. She has been accused of using anti-Semitic themes that allude to the complete removal of the state of Israel.

[embedded content]
Joe Biden Says He Admires Radical Anti-Israel Rep. “Rashid” Tlaib, Thanks Her For Being A “Fighter”

How Georgia Democrats Are Fudging Their Past Positions on Voter ID
Man sues 7 airlines for discriminating against travelers with medical conditions
Police slap felony charge on man who did burnout on rainbow-painted street: ‘Tear up that gay intersection’
Eric Adams (Probably) Defeats Socialism in New York City
Shocking video shows terrified children ages 5 and 10 in the line of fire during brazen NYC attack