Last week Nancy Pelosi and Chuck Schumer lashed out at Republican Representative Marjorie Taylor Greene (aka MTG) after her speech in front of an excited Arizona audience in Mesa, Arizona with fellow Representatives Matt Gaetz, Paul Gosar and Andy Biggs.

The Washington, DC Swamp outrage machine spewed out their usual bile following MTG’s speech where she accused Democrats of acting like Nazis.

“You know, we can look back in a time in history where people were told to wear a gold star,” Greene said as Brody, a right-wing commentator, nodded in sage agreement. “And they were definitely treated like second-class citizens — so much so that they were put in trains and taken to gas chambers in Nazi Germany, and this is exactly the type of abuse that Nancy Pelosi is talking about.”

TRENDING: “It Should Be that He Is Simply Reinstated, That a New Inauguration Day Is Set” – Sidney Powell Speaks in TX on What Happens After the Fraud Is Exposed (VIDEO)

Well, the very same Democrat crowd that promotes the murder of unborn babies, especially black babies, in the name of funding Planned Parenthood, sprang out of the gate to shriek their outrage at the audacity of MTG to observe that the King was parading about stark ass naked.

MTG was labeled an anti-Semite. Irony alert. The same douchebags who embrace Hamas–a group that calls for the elimination of Israel–and call for a tougher stance against Israel now have their lace panties in a bunch because this freedom-loving woman has the cojones to call out their hypocrisy over wearing useless face coverings.

But that’s not the real news. Just do a “duck duck go” search using the terms “Nancy Pelosi and Marjorie Taylor Greene and Holocaust”. Here is what you will get:

Not a thing about Pelosi. It is all about the faux outrage being expressed by the usual yammering morons inhabiting the Republican swamp. Kevin McCarthy whined:

Marjorie is wrong, and her intentional decision to compare the horrors of the Holocaust with wearing masks is appalling. Let me be clear: the House Republican Conference condemns this language.

This from the guy who is shacking up with Frank Luntz. The comments from Mitch McConnel were just as despicable.

So let us take this incident apart piece by piece.

First, the masks. All masks are not equal. None of the masks, including the highly touted N95, can prevent the Covid-19 virus from entering your respiratory system. Just slapping a piece of cotton across your pie-hole may make you feel “secure” but you are bullshitting yourself. If wearing a face mask actually did prevent the spread of the disease I would be the first to encourage it. But it does not, so the wearing of the mask is more of a religious talisman.

Forcing people to wear masks that have nothing to do with actual medical science is a political act for the express purpose of identifying people who are not vaccinated. Which brings me to the “gold star.”

How did Hitler and the rest of his Nazi thugs know who the Jews were? Ugly Nazi propaganda notwithstanding, which depicted Jews as serpents and vermin (the image below appeared on the cover of Der Strummer in 1934). 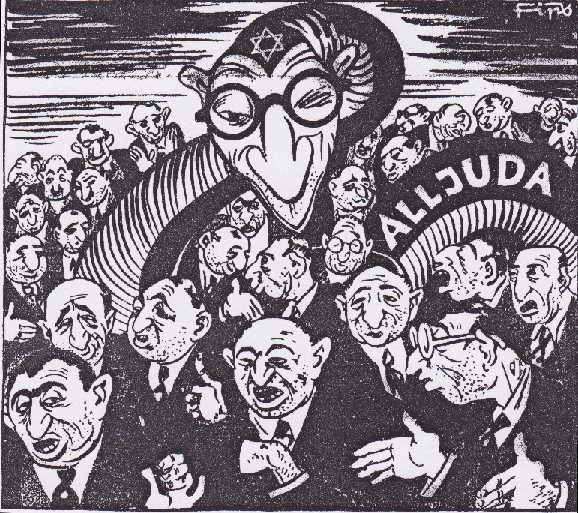 You cannot identify who is a Jew by mere observation. Jews come in all shapes, colors and sizes. That is why Hitler and his henchmen needed an identifying badge. Hence the Star of David (now for some actual history courtesy of the US Holocaust Museum):

During the Nazi era, German authorities reintroduced the Jewish badge as a key element in their plan to persecute and eventually to destroy the Jewish population of Europe. They used the badge not only to stigmatize and humiliate Jews but also to segregate them and to watch and control their movements. The badge also facilitated deportation. . . .

In September 1939, following the German invasion of Poland, individual German military and civilian authorities imposed the Jewish badge in certain Polish towns and villages, the first being decreed in the town of Wloclawek on October 29, 1939. In the General Government, View This Term in the Glossary that part of Poland directly occupied by Germany, Governor General Hans Frank ordered on November 23, 1939, that all Jews over the age of ten wear a “Jewish Star”: a white armband affixed with a blue six-sided star, worn over the right upper sleeve of one’s outer garments. There were heavy penalties for those caught not wearing it.

The Democrat push for people to wear masks is to facilitate identification. It has no scientific or medical basis in fact in protecting people from spreading this virus. But it can be useful as a tool of political coercion.

No law has been passed. The injunctions on wearing masks are decrees by political figures. I have stopped counting the number of times that I have seen many of those political figures who demand the peasants wear masks, running around maskless. Gavin Newsom and Gretchen Whitmer are two of the more prominent mask hypocrites that come to mind. They will lock you down and lock you up while they go party. That is Nazi behavior in my book.

And this goes beyond the issue of coercing mask-wearing. Yes, people have been arrested and jailed for not wearing a mask. It ain’t law but it gets you put in the slammer. But this abuse of police powers goes beyond the masks. Americans right now are being held in solitary confinement for entering the U.S. Capitol–i.e., the alleged crime of trespassing. No habeus corpus and no chorus of protest from Republican leaders decrying this violation of Constitutional rights.

God bless MTG. Rather than address her comments substantively, the mob of brownshirts masquerading as the Democrat establishment rely instead on character assassination and bullying. That is exactly how former thugs reacted when challenged. Nancy Pelosi and Chuckie Schumer remind me of Roland Freisler, an infamous Nazi judge known for his histrionics.

We understand this is a sensitive subject. So what do you say?

Advocacy Group Files Complaint against NYC Schools over ‘Segregated’ Social Justice Exercise
Austria Throws Out Its Constitution over COVID
A 9-year-old was found dead and stuffed into a duffel bag in Oregon. Police arrested her mother and her mother’s girlfriend a year later.
SF Schools Made Kids Wait a Year to Take Algebra; You’ll Totally Believe What Happened Next
Mark of the Beast is here: Subcutaneous quantum dot “vaccine passports” from Bill Gates are ready to be injected into human subjects