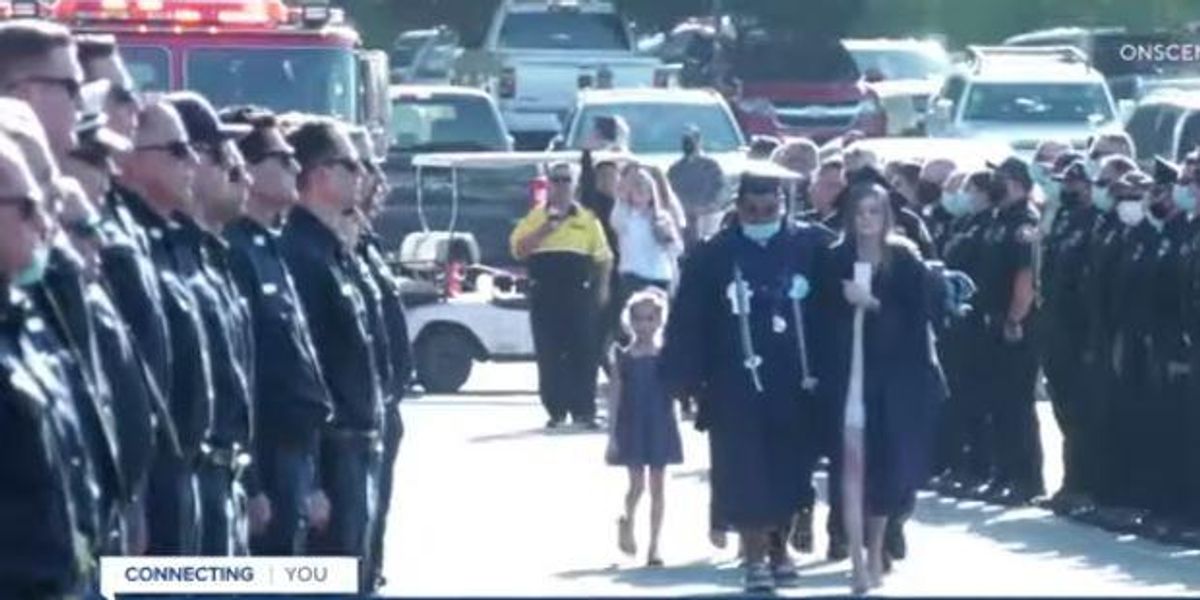 Firefighter Tory Carlon was killed at a Los Angeles County Fire Station earlier this week by a disgruntled off-duty colleague, according to authorities.

Despite the tragic loss, Carlon’s oldest of three daughters, Joslyn, showed up to her high school graduation on Thursday — and so did hundreds of firefighters who came to support the family of their slain brother.

Tory Carlon, 44, was a 20-year firefighter who was killed Tuesday during a shooting at a Los Angeles County Fire Station in Agua Dulce. After the shooting, the suspect, also a firefighter, fled, allegedly lighting his home on fire, and dying from an apparent self-inflicted gunshot wound. An LAFD captain was also wounded by the suspect at the station.

A GoFundMe account set up for Carlon’s wife, Heidi, and their three girls describes Tory as “an extremely dedicated father and husband who brought a sense of calm to everyone.” It added that “he absolutely loved being a firefighter and serving others.”

When Joslyn arrived at her graduation Thursday, an estimated 300 firefighters stood in black uniforms outside the entrance to the ceremony, according to KABC-TV. As she walked across the stage to receive her diploma, she wore her father’s firefighting jacket over her robe. She was escorted away by a sheriff’s deputy who is a family friend.

LA County Fire Battalion Chief Nick Berkuta told the outlet, “To graduate from high school and not have your father here — who was a huge part of her life — and to lose, for me, a brother. This is the least we could do for her and her family.”

Morning Joe: Slap Steve Bannon ‘In Handcuffs’ and Force Him to Testify
Texas House passes bill that would largely bar students from playing school sports meant for members of the opposite biological sex
TikTok person wants to control speech by removing another word from English language
What the Gupta–Rogan COVID Conversation Revealed
Youngkin Campaign Clarifies Position on Taxpayer Funding of Abortion