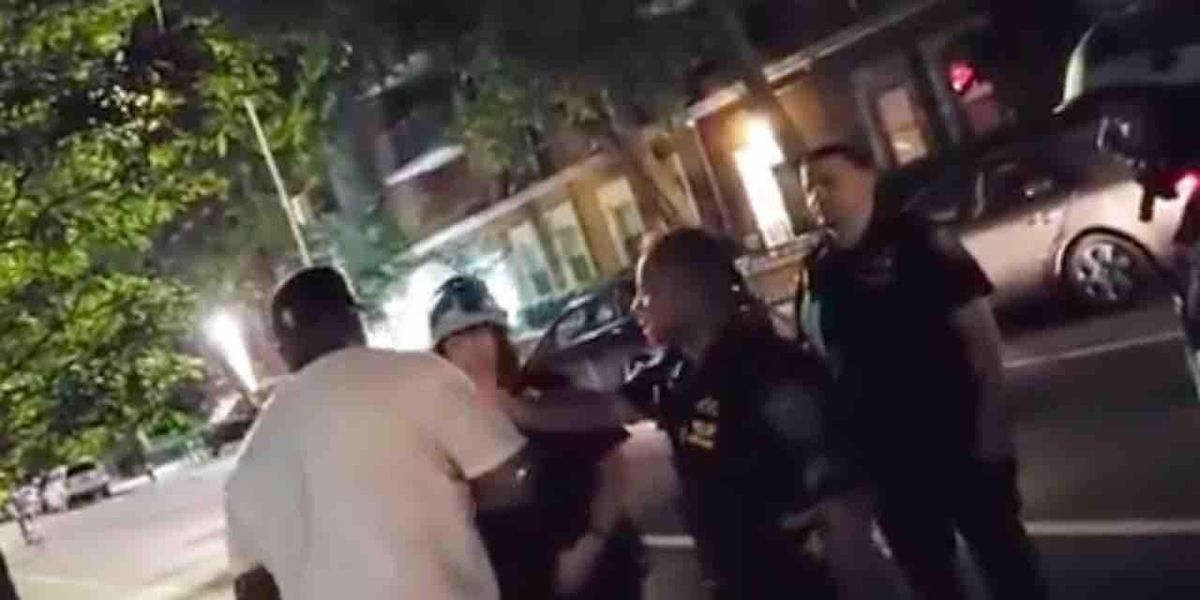 A black man was caught on video repeatedly calling an Asian New York City police officer a “f***in’ ch**k” in front about six other officers on a street in Washington Square Park over the weekend, the New York Post reported.

The paper said the officers were in the area due to protests in the park, and the video begins with the furious man standing on a sidewalk and facing down an officer in the street and using profanity while repeatedly using an Asian slur against him.

The Post said the individual taking video was livestreaming from the park and turned the camera away when the officer approached the man and apparently told him to stay on the sidewalk.

“I’m on the sidewalk, what you gonna do? What’s your name?” the man asked, according to the paper, although those questions can’t be heard on the below video.

Another officer tells the man to stay on the sidewalk and motions the other officers — including the Asian officer — to keep on walking down the street. But the “ch**k” references keep coming.

At one point a white man on a bicycle rides by the scene and rips into the black man for using a racial slur.

“No, f*** you!” the white man shoots back as he’s further down the sidewalk.

As the black man continues to tell the white man to “suck my d***,” the white man yells several times to “stop calling people ch**ks, man, that’s f***ed up!”

But the black man yells back that “black people can’t be racist” — and continues to berate and use slurs and profanity against the Asian officer while following the group of police and trying to bait them: “What you wanna do? What you wanna do?”

By the end of the clip when the police were gone, the man bizarrely claims that his tirade didn’t “go out to all Asian people.”

He adds, “Lemme get this straight. I’m talkin’ about the f***in’ cops. … The cops are not our friends. You understand? I wanna get that clear ‘cuz [the white man on the bicycle] rolled by and said, ‘Yo, you racist.’ Black people cannot be racist!”

*From Wash Sq. Park on Sat*

Criminals know that politicians are all talk. They know there are no real consequences… https://t.co/WBzy6PLzEw

What did the NYPD have to say?

“Each day, NYPD officers are expected to maintain a level of professionalism under an array of difficult circumstances,” a police spokeswoman told the Post. “In this instance, an Asian police officer was subjected to an ugly onslaught of racial slurs and maintained his composure. However, it is disturbing to see this type of language used against any Asian person in light of the disturbing increase of Asian hate crimes citywide.”

The Asian Jade Society — NYPD Asian officers who “share common interests, represent the Asian community within the department with a unified front, and provide support for one another” — responded in a tweet that it’s “appalled by another one of these blatant attacks of derogatory slurs and pure racism directed towards one of our own Asian officers.”

The paper added that it wasn’t clear if the man yelling in the video was among those who clashed with and were forced out of the park by police.