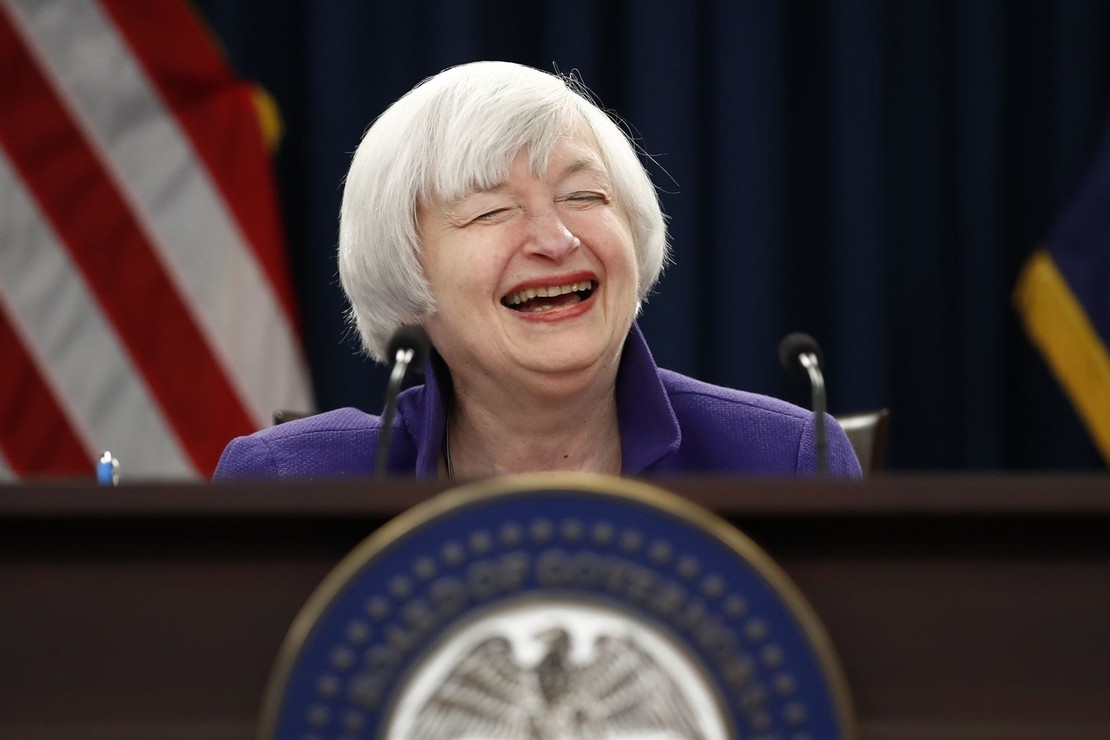 Good news, everybody! Janet Yellen wants to bring the economy to a screeching halt with higher interest rates at a time when Washington is already paying out record trillions to the unemployed, and if for some reason she doesn’t, then inflation is going to wipe out your savings.

Visiting London for a G7 finance ministers meeting, Presidentish Joe Biden’s new Treasury Secretary told Bloomberg, “We’ve been fighting inflation that’s too low and interest rates that are too low now for a decade,” and that “We want them to go back to a normal environment.”

“If this helps a little bit to alleviate things,” Yellen said, “then that’s not a bad thing — that’s a good thing.”

You could beat that lady with a cluebat like Robert De Niro during the infamous dinner scene in The Untouchables and Yellen would just sit there with that airy smile, unfazed and seemingly untouched.

For people who, you know, buy things, prices have been on the upswing for months. Worse, we have yet to feel the full effects of Biden’s big spending spree. You can’t inject a couple trillion printed-up dollars into the economy, while at the same time suppressing economic activity with extended and expanded unemployment benefits, without generating inflation.

Worse, Biden has proposed a $6 trillion baseline budget for next year, with trillion-dollar deficits as far as the eye can see. He’s making Barack Obama look like Leona Helmsley.

As much as I’d love to point all my fingers (and maybe even a few toes) at Biden and his fellow Democrats, the truth is that the mess we’re in is truly bipartisan.

In 2000, our debt was about half of our total Gross Domestic Product, and barely expected to rise under then-President Bill Clinton and former House Speaker Newt Gingrich’s balanced-budget deal.

Today, our outstanding debt is nearly a third larger than the total economy and projected to get nothing but bigger.

We can’t keep interest rates at zero forever without triggering hyperinflation, but we can’t raise them without destroying what little remains of Washington’s finances.

The fact is, that even without trillions of dollars in Wuhan flu-related emergency spending, our fiscal doom has long been baked into Washington’s spending “plans.”

I started writing about this issue in high school (Missouri Military Academy, class of ’87), after reading a Ben Wattenberg column about “the birth dearth” and what it meant for Social Security, Medicare — and their impending insolvency.

It was clear to a 17-year-old high school junior more than three decades ago that an aging population’s demand for public health care and retirement benefits would, in my lifetime, far outstrip the working population’s ability (or willingness) to pay for it.

Not only does Washington have no plan to rein in social spending, there’s no will to even talk about it, outside of a few so-called “kooks” like Senator Rand Paul of Kentucky and Senator Mike Lee of Utah.

Biden’s spending plans are just punching the accelerator on a car that was already speeding toward a cliff.

We’re now heading towards the precipice at 110mph instead of 90. Feel worse? Better? Anything at all?

Historically, governments sitting on this much debt and with impossible demands on the treasury always take the same out: Inflate the debt away (along with the middle class’s savings) and start over.