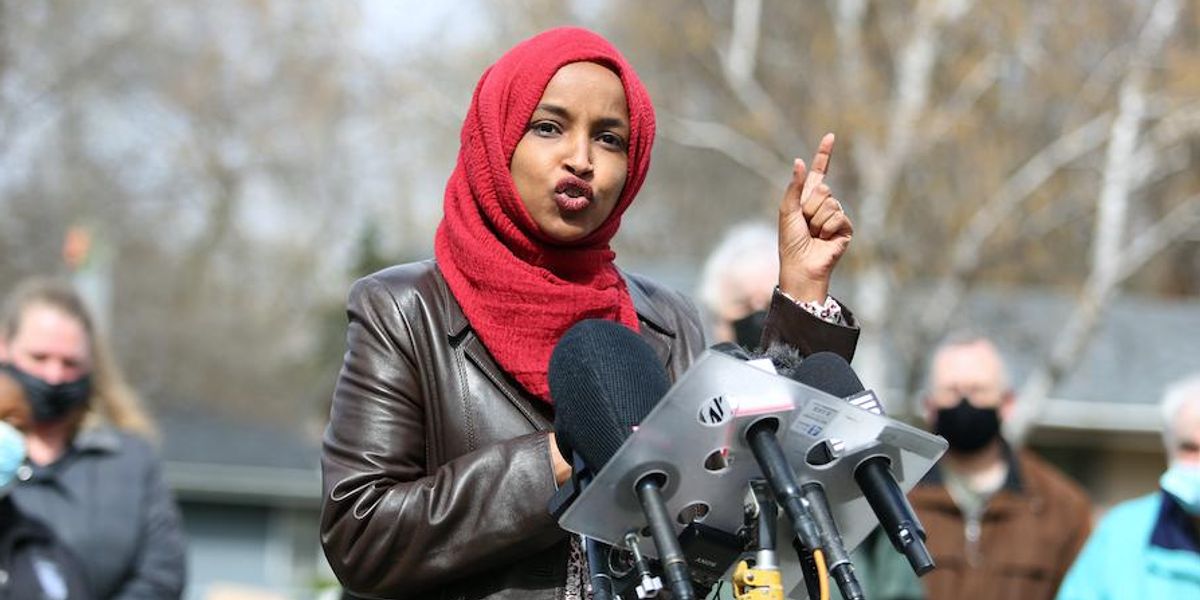 Rep. Ilhan Omar (D-Minn.) upset a lot of people this week when she equated the U.S. and Israel to Hamas and the Taliban. It turns out it wasn’t just Republicans who are calling her out for her remarks.

A dozen of her fellow U.S. House Democrats issued a statement Wednesday night criticizing her statements. And now a report has surfaced that the split between Omar and Democratic caucus is more significant than previously reported, with some Democratic lawmakers reportedly calling her an “anti-Semite” privately.

What did Omar say?

In a Monday tweet, Omar claimed the U.S., Israel, Hamas, and the Taliban have all committed “unthinkable atrocities” and human rights abuses.

“We must have the same level of accountability and justice for all victims of crimes against humanity,” she said.

The tweet included a clip of Omar questioning Secretary of State Antony Blinken how those who perpetrate human rights abuses — including, she said, Hamas, the Taliban, and Israeli security forces — will be held accountable.

Omar’s tweets and questions for Blinken came in the wake of thousands of Hamas rocket attacks against Israel in May, to which Israel responded with targeted air strikes. During the conflict, Omar accused Israel of committing war crimes.

How did her Democratic critics respond?

“Equating the United States and Israel to Hamas and the Taliban is as offensive as it is misguided,” the statement began. “Ignoring the differences between democracies governed by the rule of law and contemptible organizations that engage in terrorism at best discredits one’s intended argument and at worst reflects deep-seated prejudice.”

“The United States and Israel are imperfect and, like all democracies, at times deserving of critique, but false equivalencies give cover to terrorist groups,” the dozen Democrats concluded. “We urge Congresswoman Omar to clarify her words placing the US and Israel in the same category as Hamas and the Taliban.”

Things, however, are reportedly worse than even that statement let on.

According to Punchbowl News, the fallout from Omar’s actions “has erupted into an open brawl” and the “fight threatens to leave a deep divide among Democrats.” It could even cost Omar her seat on the Foreign Affairs Committee.

Punchbowl reported that a group of Jewish Democratic lawmakers met on a call Wednesday and were listening to a speaker address concerns about the right’s anti-Semitism. The discussion, however, “quickly turned to Omar’s recent remarks and what they should do in response.”

This is not the first time Democrats have had to contend with Omar’s anti-Semitic rhetoric, the outlet noted, citing the March 2019 anti-bigotry resolution the House was forced to pass in response to her multiple contentious statements.

Apparently, Omar’s schtick is wearing on some of her liberal colleagues, as a “number of Omar’s fellow Democrats believe Omar is an anti-Semite,” Punchbowl reported, “even if they don’t say so publicly.”

The left-wing Minnesota lawmaker did not take kindly to the Democrats’ Wednesday statement about her latest remarks.

She went on Twitter to rip her fellow lawmakers for their “islamophobic tropes” and their “constant harassment & silencing.”

“It’s shameful for colleagues who call me when they need my support to now put out a statement asking for ‘clarification’ and not just call,” she said. “The islamophobic tropes in this statement are offensive. The constant harassment & silencing from the signers of this letter is unbearable.”

It’s shameful for colleagues who call me when they need my support to now put out a statement asking for “clarifica… https://t.co/0yzw8jNaQ0

WATER WARS about to go kinetic in America as farmers targeted by “terrorist” state governments that are deliberately collapsing civilization
After banning CRT, Gov. Ron DeSantis signs law requiring all students learn ‘evils of communism’ and ‘real patriots’ who escaped it
The Shrinking Health Questionnaire
Pence ‘Proud’ of Rejecting ‘Un-American’ Demand That He Overturn Election Results
The Kruiser Kabana Episode 131: Government Economists Are the Dumbest People Ever