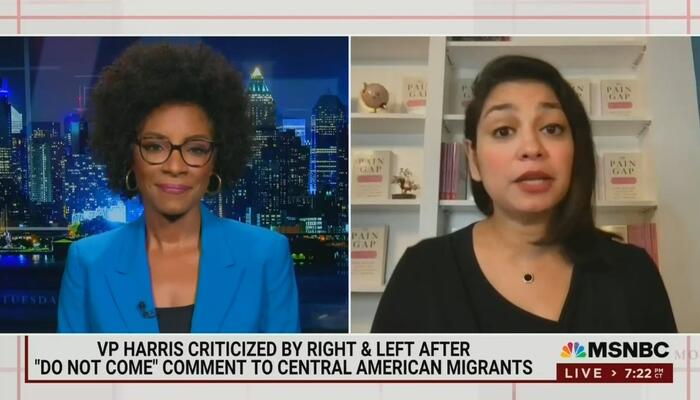 MSNBC has rushed to protect Vice President Kamala Harris from the well-deserved criticism she received after visiting Guatemala and Mexico. On Saturday evening’s The Week with Joshua Johnson, radical leftist fill-in host Zerlina Maxwell and guest Anushay Hossain ranted about this criticism claiming it was fueled by sexism: “Women and men aren’t assessed through the same lens, and that’s one thing we have to keep in mind whenever we’re talking about the Vice President.”

It comes as no surprise that MSNBC somehow managed to tie gender into a policy issue that has nothing to do with gender. Maxwell exasperatedly argued that there was no way for Harris to win in this situation. Hossain responded: “But because she is a woman and a woman of color, the level of scrutiny that she is getting from both the left and the right is really off the charts.”

Throughout this segment, Maxwell and Hossain made it seem as if a white male politician would never receive this degree of criticism. Hossain even claimed that black women are constantly “written off as hysterical.” This is a bit ironic considering that MSNBC devotes the majority of its time to criticizing Donald Trump and other Republican leaders.

Maxwell continued to describe the difficult situation that Harris was in and asked Hossain for her opinion on Harris’s “do not come” remarks. Hossain was quick to blame Republicans:

She echoed Maxwell’s comment on the intentions behind the criticisms from the left and right, claiming conservatives were more concerned with photo-ops and image whereas the left was supposedly focusing on identifying the root causes of immigration issues.

The liberal media will continue to praise Harris because of her left-wing ideology while using her race and gender to smear any of her critics as misogynistic and racist, instead of examining any of the actual policies of the Biden administration.

This segment was brought to you by Audi and Liberty Mutual. Click on the links to let them know what you think.

Below is a transcript of the segment, click “expand” to read:

The Week with Joshua Johnson

ZERLINA MAXWELL: Republicans pounced on the comments, of course. But they also didn’t go over too well on the left, including with representative Alexandria Ocasio-Cortez who called the comments disappointing. So, here is what I want to know, given that immigration is one of the most complex issues we face as a country, a situation where there is no quick fix, is there anything Harris could have said that would not have drawn criticism, as a woman, a person of color and the daughter of immigrants herself, the first ever vice president who isn’t a white man, by the way, always remember that. Is Harris being held to a different standard? Joining me now to discuss is Anushay Hossain, she’s journalist and the host of the very cool named podcast “Spilling Chai.” She’s also the author of the book “The Pain Gap: How Sexism and Racism in Health Care Kill Women.” Thank you so much for joining us tonight.

ANUSHAY HOSSAIN: Thank you so much for having me, Zerlina. Great to be on with you.

MAXWELL: I know. It’s so fun. So Harris is really in a no win situation with this crisis. Let’s be honest about that, up top, and I think this line from your recent op Ed in USA Today sums it up quite well. You wrote as a woman of color Harris would be getting much more intense and negative blowback if she had flung open her arms with a huge come to America sign and came off as soft on immigration on her first official trip to Guatemala and Mexico. So she didn’t have a whole lot of options when it came to messaging on this trip. What do you think of how she did?

HOSSAIN: You know, I think this was a really tough topic, a really tough portfolio. And for her first trip or her first international trip abroad. And it would have been a tough portfolio for even a seasoned diplomat. But because she is a woman and a woman of color, the level of scrutiny that she is getting from both the left and the right is really off the charts. And, you know, it’s interesting that you mention the part about white men, Zerlina because we always give them the benefit of the doubt. No one criticized Jared Kushner once for not delivering peace to the Middle East. But people really do expect Kamala Harris, our vice president, to solve the border issue overnight. All that being said, and I know she is in a really tough situation, it was jarring to hear this administration sound so much like the last administration, especially on the issue of immigration and because she is the daughter of an immigrant. But as I say in my USA Today piece, as the first black and first Asian and first woman to hold the second most powerful job in the country, she can’t keep anybody happy. It’s not possible.

MAXWELL: You know, one of the things I think is really important to always remember is that the intention behind a critique that matters. So the intentions behind the critiques from the left, they’re really different than the criticism she gets from the right. They’re like, go put on the little vest and stand at the border and do cosplay, somehow that’s supposed to effectively solve this complex issue. Speak a little bit though more to what you just said about how it was jarring for a — the daughter of immigrants to say, do not come. I mean, you know, how can she say something different that is more authentic to her own experience?

HOSSAIN: Exactly. Well, you know, she’s — the reason she’s in such a tricky position is because the Republicans are very good on this issue. Not good on this issue with solutions and policy, but with their messaging and with their false information. And basically lies. They have framed this issue. So they have their talking points already ready to go. To be quite blunt with you Zerlina, it is shocking that the Vice President wasn’t briefed better, wasn’t prepared better with her language — with her language on her wording on such a complicated issue because for the Republicans going to the border is a photo opportunity. Kamala Harris is tasked with solving the root issues that drive the border crisis. So, you know, while the Republicans are pouncing on this, the messaging around it is the fact that it is a very complex issue and, so, while Republicans are very good with images, the dems need to get better around our messaging because we kind of sent the Vice President to the lion’s den on this issue.

MAXWELL: It feels to me like we cannot forget how complex this issue is. And sometimes I’m like if a criticism is why didn’t you go do this thing instead of that thing, then explain to me how doing a, or this thing, would help.

MAXWELL: Women and men aren’t assessed through the same lens, and that’s one thing we have to keep in mind whenever we’re talking about the Vice President. Can women get angry and actually show it? Is that something that we are going to have to get used to now that we have a Vice President in Kamala Harris who is a woman? How does she navigate that dynamic?

HOSSAIN: It is so tricky. And it’s full of land mines. And as you and I know Zerlina, and especially as you know as a black woman, women of color, we’re not allowed to get emotional or be angry. We will be dismissed and written off as hysterical so fast, faster than you say border. Which is what I talk about in my upcoming book, we will be labeled and dismissed as hysterical even when we have something valid to say. But I do think Kamala Harris is in a tight spot and people have to remember just as Jared Kushner didn’t deliver on our piece, our Vice President is not going to be able to solve the border crisis overnight.

Americans Disagree, But CNN Insists Inflation ‘Not Biden’s Fault!’
Does Kyle Rittenhouse Deserve a Congressional Gold Medal?
Kyle Rittenhouse accuses lawyers Lin Wood and John Pierce of leaving him in jail so that they could raise more money for themselves
Covid “vaccine” mandates dangerous for children, warns former Australian medical official
Glenn Loury’s Journey from Chicago’s South Side to the Ivy League and Beyond